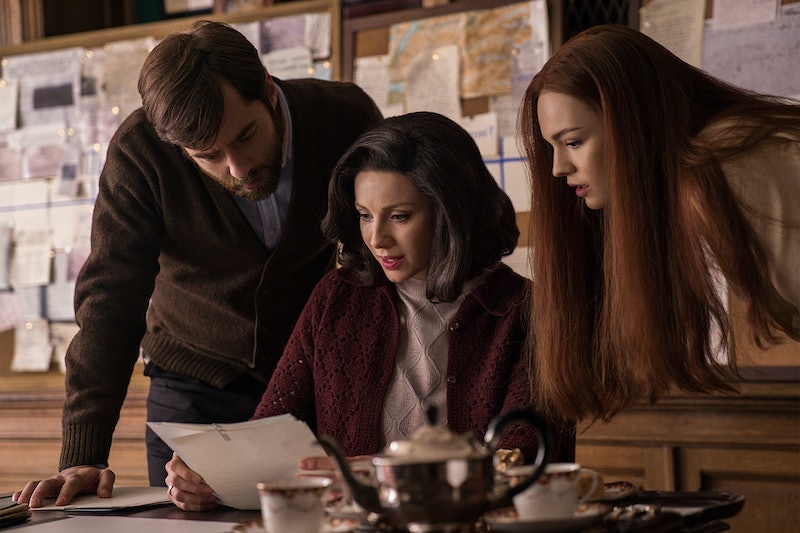 After becoming invested in Claire and Brianna Randall's personal lives at the end of Season 2, Roger Wakefield (Richard Rankin) continues to aid Claire in Outlander Season 3, in her fantastical time traveling search for Jamie. Spoilers for Episode 4 of Season 3 ahead. But "Of Lost Things" ends on a melancholy note as Claire gives up on looking for Jamie, and Brianna returns to the U.S. with her mother after sharing a kiss with Roger. But, as the preview for the next episode showed, Roger is reunited with Claire and Brianna in Episode 5 and his story is far from over. Speaking with Bustle over the phone in advance of his return, Rankin teased the impact Roger will have on the Randalls' lives going forward, something of which book fans are already well aware.

With Claire and Brianna leaving Scotland in "Of Lost Things," Roger is left to process his emotions. "There was a bit that really struck me at the end of Episode 4 when you see a shot of each of them," Rankin says. "He's really alone for the first time we've seen Roger. He finds himself alone and Brianna's gone and Claire's gone and Claire's abandoned the search for Jamie ... And [Brianna's also] feeling quite alone and detached from her mother. And Claire's lost Frank, and she's still obviously separated from Jamie. It's done without much or any dialogue at the end of Episode 4 where you just get this really profound impact."

As Brianna mourns the man who raised her, she is also coming to terms with the fact that her biological father is an 18th century warrior from the Scottish Highlands. Rankin notes that Brianna and Claire's situation energizes Roger, but his character is also dealing with a major blow.

"Roger's just recently lost his father at the end of Season 2, so I think that he hasn't really had time to come to terms with that because Brianna and Claire have been such a distraction to him and I think he's fascinated by both of them," Rankin says. "And I think because he's been so wrapped up in this, he hasn't really had time to process the death of his father."

But the deaths of their father figures is actually one of the reasons Brianna and Roger bond so quickly. Rankin says that while there is an immediate physical attraction between Brianna and Roger, their connection is deeper than that.

"There's a vulnerability in them both and strangely, they're both going through some very turbulent and tough experiences at the time and I think they're there for each other through that," Rankin says. "They just forged this really strong bond really early on through that and that sort of carries them on and that just gets stronger as the story moves forward."

The preview for Episode 5, "Freedom & Whiskey," shows Roger standing with Brianna in America as she sadly looks at her mother out the window. (Based on the preview, it seems that Claire is going back in time to find Jamie.) Of his character's reunion with Brianna, Rankin says, "There are other reasons why he's there, but primarily, he just has a real pining to see Brianna. ... It's quite heartwarming."

While book readers know where Roger and Bree's romantic relationship is headed, TV viewers will have to wait and see how it unfolds. And though Roger and Brianna appear in "Freedom & Whiskey," Rankin could not confirm if he and Bree actor Sophie Skelton will return again after that in Season 3. But as Outlander continues, the TV series will undoubtedly dive more into their relationship. "I think it all just gets better and better," Rankin says. "Season 3 has got off to such an amazing start and it just seems to be rocketing. So yeah, there's a lot of exciting stuff still to come in Season 3 and a heck of a lot of exciting stuff to come certainly in Season 4 as well."

But before Season 4 occurs, Roger will reenter the lives of the Randall women and help them deal with their shared present and Claire's past.

More like this
On 'The Handmaid’s Tale,' Christine Ko Fights Back
By Gretchen Smail
Jinkx Monsoon Is About To Get Real Sketchy
By Sam Ramsden
Mike Flanagan Teases 'The Midnight Club' In This Exclusive, Creepy Clip
By Grace Wehniainen
Nicola Coughlan Shared A Lady Whistledown Excerpt From ‘Bridgerton’ Season 3
By Grace Wehniainen, Alyssa Lapid and Sam Ramsden
Get Even More From Bustle — Sign Up For The Newsletter