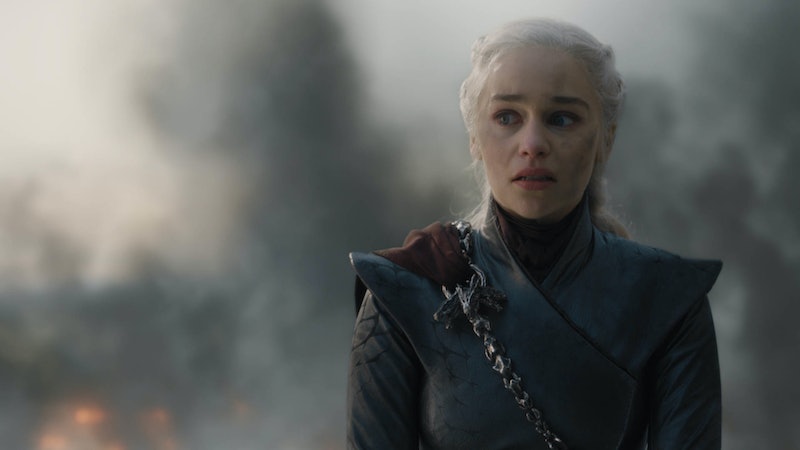 Any hope for a happy ending for the Mother of Dragons went up in flames with King's Landing on Game of Thrones. The question is no longer will she die, but rather how will Daenerys die? Despite her rampage, the prospect of watching the Dragon Queen's life being taken from her is still heartbreaking. And that's exactly why the person who brings about her end needs to be just as gutted as the audience, and when you think of it in those terms, it seems inevitable that Jon Snow will be the one to do the deed.

Jon and Daenerys' relationship is a relatively new addition to the Game of Thrones canon. The characters' paths didn't cross until Season 7, but it didn't take them long to fall hard for each other. Since Jon's big paternity reveal their once loving relationship has crumbled, and things only got worse when Jon watched in horror as his queen ignored the bells of surrender and destroyed King's Landing.

Heading into the finale, the last two Targaryens are on opposite sides of a moral battle. The honorable Jon will not be able to serve a queen who rules so ruthlessly, and Daenerys won't be able to keep a potential usurper by her side. It seems inevitable that one will kill the other, and unless the series is planning a dark twist that sees the Dragon Queen preparing for a long, leisurely reign of terror, it feels safe to say that Jon will be left with no choice but to murder the woman he loves.

While Jon's the most likely candidate to kill Daenerys, he's not the only character with a motive. His sister Arya appears to be gunning for the Dragon Queen as well, and Tyrion is no doubt feeling pretty disillusioned right now. Daenerys is poised to ascend to the Iron Throne with precious few allies beside her. Because of this, she's vulnerable, even though she may be feeling more powerful than ever before.

It's not hard to imagine a scenario where Jon is forced to make Daenerys believe that he's still by her side, only to then stab her in the back. Such a death would mirror her father's, since the Mad King was murdered by Jaime Lannister, who was tasked with protecting him no matter what. Jaime chose to kill the king to protect the innocents of King's Landing, as well as his father. And if Jon makes a similar decision it will be to protect the Seven Kingdoms and his remaining siblings, all of whom will no doubt be in danger because they know he's the true Targaryen heir.

Since Season 8 has been all about mirroring past seasons and events, there would be something darkly poetic about having Daenerys die in the same manner as her father. It could even happen in the same location — the Throne Room (if it's still standing, that is). The most significant difference would be that Jaime was bound by duty to the Mad King, while it's love that bonds Jon to the Dragon Queen.

The only thing that's certain at this point is that Daenerys' death is sure to be downright Shakespearean, as the person closest to her is also the most likely to bring her story to an end.