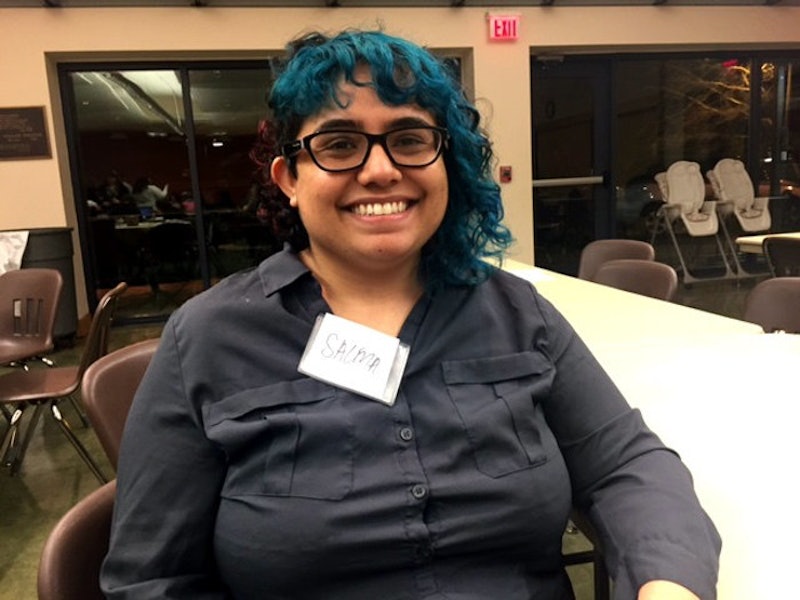 On Jan. 21, women and their allies in over 600 cities and towns across the country marched to show the massive political power of women in America and show solidarity with those who may need defending during Trump's presidency. In Raleigh, the capital of North Carolina, the issue at hand wasn't just the president, but also how to protest a legislature that seems to many to be bent on eliminating the rights of LGBT people, women, and working class people. The organizers of the Women's March on Raleigh took the time to explain to Bustle just how much is at stake for them and the countless women across N.C. whose rights they are fighting for.

On an unseasonably warm Tuesday evening, a few dozen women (and a handful of men) gathered in the basement of the most progressive Christian church in Raleigh to put the finishing touches on their Saturday march that would draw a crowd of more than 17,000 people. One woman informed the group that there would be more than 600 affiliated women's marches happening that day; another woman, who is transgender, told everyone that on Jan. 21, the day of the march, she'd be celebrating her 20th transition anniversary. There was a palpable sense of camaraderie among the group, and looking around, it was stunning to witness just how diverse the organizers of this event were.

In North Carolina, there is far more to organize for and against than just the incoming administration. In 2016, the state became globally infamous for its passage of HB2, the so-called "bathroom bill" that also eliminated the ability to sue for workplace discrimination and prohibited cities from setting their own minimum wages above the state-appointed $7.25-an-hour.

Later, the state's former governor Pat McCrory contested his loss to his challenger Roy Cooper, only to lose even more sorely in the recount. And the same Republican legislature that passed HB2 worked swiftly to reduce the power of the incoming Democratic governor in a shocking political event now commonly known as "the Carolina coup."

It was both the "Carolina coup" and HB2 that brought Salma Mirza, the march's communications co-chair and activist in the neighboring city of Durham, to the march. Mirza, who attended college at UNC Chapel Hill, says they moved to Durham just a few weeks before the passage of HB2. At that point, they knew it was time to fight.

"Sometimes when you're organizing, your emotions are just muted, and you just go from thing to thing, and you're like an automaton," Mirza says. "But HB2, the way that it passed so quickly, with the anti-queer provisions, the anti-worker provisions, anti-local governance stuff, was just so infuriating that I wanted to get involved in something."

Get involved they did. Following the March 2016 passage of HB2, Mirza and four other queer activists were arrested outside of the governor's mansion after refusing to leave the street on police orders. Now, despite feeling a sense of despair due to the election results, Mirza says she and fellow activists feel more motivated than ever.

"I just realized that there was too much to do, that I had to pull myself out of that despair and shock," Mirza says. "We have to come together in community and organize the kind of fight that we need to build the kind of community we need and have each others' backs, not just to be the ones resisting but to eventually build power."

"Community" was a term echoed throughout the meeting, and was especially important to Angela Bridgman, a trans woman and recent N.C. transplant whose driving factor to join the march was HB2. Bridgman, who mentioned that the march falls on her 20-year transition anniversary, says the backlash from the bill pales in comparison to the support she's received as a trans North Carolinian in her local community.

"In 20 years of being an out trans person, I have never seen the kind of support that we now have since HB2 passed," Bridgman says. "I looked around me, and I saw all this support, and the first question I had was 'where have you all been for 19 years when I was a one-woman army?' I'm very grateful for that support."

That support, however, came at a terrible cost. As a veteran of the LGBT community, Bridgman admits that HB2 still came as a heartbreaking shock. The need for community in the face of such seeming bigotry, both in the N.C. state legislature and from the office of our new president, helped inspire the regional women's marches.

But "women" are not a singular force (just ask the 53 percent of white women voters who voted for Trump). Even from its earliest stages, there has been worries of racial division and a lack of inclusivity at the Women's March on Washington and the hundreds of affiliate marches around the nation.

It was that worry that brought Saba Taj, a queer Muslim artist and activist based in Durham to the Women's March on Raleigh planning meetings.

"Folks were noticing a need for more people of color, so I was like 'yeah, let's see!', and that's how I got involved," Taj tells Bustle.

For Taj, HB2 was also an inextricable part of their drive to organize for the women's march. They hope to see conversations around the various intersections of reproductive rights, gender identity (especially in regards to trans women of color) and race ensue from the march.

"I think that's definitely something we're addressing in this march in particular, understanding that it’s trans women in particular who are most impacted by this legislation in terms of the bathroom part of it," Taj says.

The intersectionality and diversity present in that room of organizers was reassuring in the face of accusations of white woman-focused feminism that have surrounded the nationwide women's marches. Sarah Moncelle, a former statewide organizer with the Feminist Majority Foundation and one of the founding organizers of the Raleigh women's march, says the diversity was striking for her.

Moncelle's background in politics helped her understand that the upsetting election of Trump would be an opportunity for people to organize like never before. She said that in the initial planning stages, women began coming forward who had no activism experience but who wanted to get together and make their voices heard.

"As frustrated as I am about N.C.'s legislature, the Carolina coup, and the Trump presidency, I’m encouraged knowing that I’m amidst all these incredible women," Moncelle tells Bustle. "They're coming together and saying 'I don't have experience but I know the stakes are higher and I wanna get out there and participate.' I think this is the start of something big, and we're excited."

There has been a fear among progressive North Carolinians that our state legislature's shocking mistreatment of its trans and working class citizens might foreshadow what's to come for the rest of the country. On Jan. 20, we were proven right when the newly sworn-in President Trump appointed John Gore, a lawyer who defended the state's university system's acquiescence to HB2, to a high-ranking civil rights position.

Whether or not they knew about Gore's appointment when they were marching, tens of thousands of people marched in N.C. in defiance of both the Trump administration and the N.C. legislature that has drawn such negative attention to this purple Southern state. If the organizing team behind the women's march in the state capital is any indication of the diverse, complex, and committed groups of activists working across the state and across the country, then Trump and the N.C. legislature can bring it on.