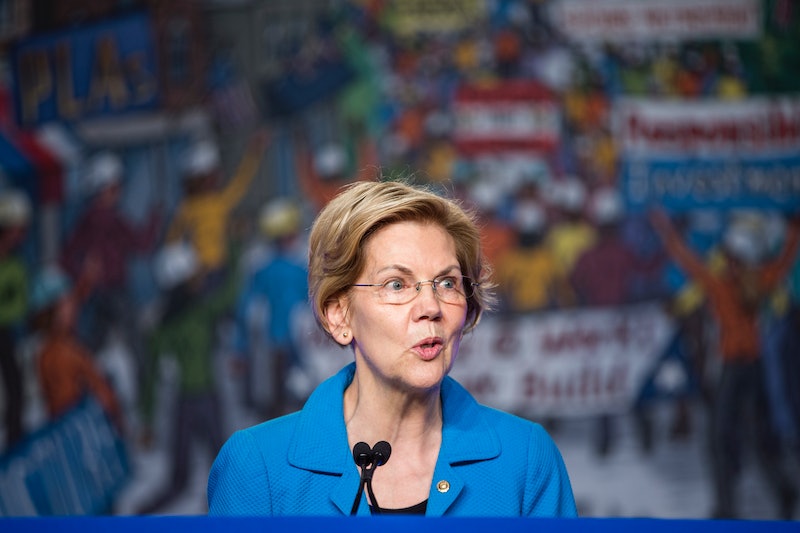 On Monday, one presidential candidate rocked the 2020 campaign discourse by introducing a massive proposal which aims to overhaul the student debt crisis. The plan, which received a lot of attention from both its supporters and its critics, would offer student loan forgiveness and make state colleges free. Because the plan includes such lofty goals, Bustle spoke to experts about how Elizabeth Warren's student loan plan could work IRL.

Warren unveiled her proposal in a Medium post in which she recounted her experience dropping out of college at 19 and later attending the University of Houston. "Higher education opened a million doors for me," she emphasized. With this personal experience in mind, as well as years spent advocating for student borrowers, the Massachusetts senator proposed canceling $50,000 worth of student debt for every person whose household income is less than $100,000. For those with a household income greater than $100,000, but less than $250,000, Warren proposed a sliding scale which "phases out by $1 for every $3." ("For example, a person with household income of $130,000 gets $40,000 in cancellation," Warren explained in her post.) She would pay for her plan by implementing a 2% tax on families who earn $50 million or more.

"I think what's going to happen is we may see that Americans would be able to save more and invest more," Sonia Lewis, CEO of the student loan counseling group The Student Loan Doctor LLC, tells Bustle. "So my theory is that [when] there's less debt, there's more room to save money to invest."

Lewis, who says she broadly supports the plan, still has some concerns though. In particular, she points out that there are borrowers who have amassed debt greater than $50,000 and who, because they are married, may have household incomes greater than $100,000. And notably, where a person or couple lives may actually require that they make at least six figures in order to live comfortably.

A 2017 study by GOBankingRates found that San Francisco residents needed to make at least $110,357 in order to comfortably cover the 50-30-20 budgeting rule, according to the San Francisco Chronicle. Under that rule, the paper reports, half of your income covers necessities, 30% covers discretionary income, and 20% goes toward savings.

Lewis also wonders about students who amassed debt from graduate school, where she says many people go deeper into debt even though they are projected to have significantly higher incomes. She adds that while her business, for example, often serves people who make up to $100,000, if those clients are married, they could be disqualified from receiving as much help under Warren's plan.

But when it comes to tackling student debt, not everyone agrees on what's the best strategy. Jessica Thompson, director of policy and planning for The Institute for College Access & Success (TICAS), tells Bustle that students with smaller amounts of debt are actually more at risk of defaulting. If anything, she says, she wishes Warren's proposal targeted those groups more closely.

"Although we've spoken a lot in terms of what we see and read and hear of the borrowers that come out of undergrad, for example, with very high amounts of debt … the reality is those are quite rare," Thompson points out.

Indeed, Debt.org reports that the average student debt in 2017 was about $37,172. Ultimately, though, Thompson believes Warren's proposed forgiveness figure of $50,000 per person, for those who qualify, is an appropriate offer.

"I just think it is more of an economic stimulus than it is necessarily aimed at a crisis," Thompson says.

Warren's plan also hopes to bolster Historically Black Colleges and Universities (HBCUs) and Minority-Serving Institutions (MSIs) by creating a $50 billion fund to service those schools, among other ideas. In explaining her proposal, she pointed to a Department of Education report that found that black students were likely to owe more than their original loan balance 12 years after beginning college.

In that vein, Warren proposed offering financial incentives for states "that demonstrate substantial improvement in enrollment and graduation rates for lower-income students and students of color." Additionally, she would ban for-profit colleges from receiving federal money.

Warren's plan generated a lot of buzz on Monday, but there's still a long way to go before such an idea could become reality. Warren is one of many, many people vying for the Democratic nomination, and the 2020 election is still nearly a year and a half away. Until then, she's certainly given voters an idea to chew on.