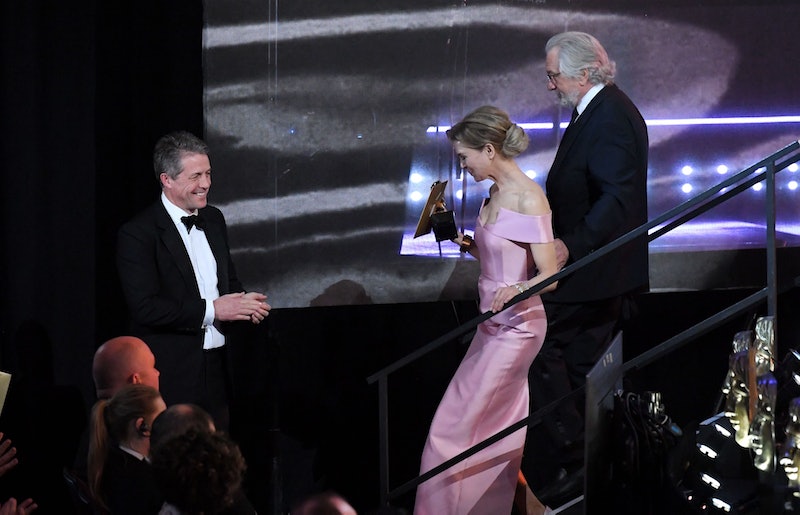 The 73rd annual British Academy Film Awards took place last night (Feb. 2) in London, and some of the biggest names from Hollywood and beyond gathered to celebrate. In addition to the various awards and speeches, one highlight of the evening emerged shortly after Reneé Zellweger's victory in the Leading Actress category, which prompted a perfect Bridget Jones throwback when former co-star Hugh Grant cracked an on-stage gag in reference to the 2001 romantic comedy.

Grant famously portrayed the character of Daniel Cleaver in the Bridget Jones's Diary trilogy, and immediately after Zellweger took home one of the most important trophies of the night, Grant arrived on stage to present the next award. Before introducing the next set of nominees, The Gentlemen star made use of a classic Jones quote, and hilariously quipped:

"First of all — well done, Jones. That indeed was a silly little dress."

The line was, of course, met with rapturous applause.

Zellweger was accepting the Leading Actress BAFTA for her performance in Judy. During her victory speech, the actor paid tribute to her fellow nominees, and added, "This is very humbling. Miss Garland, London town, which you have always loved so much, still loves you back. This is for you."

Elsewhere, World War I drama 1917 was the big winner of the 2020 ceremony, and, as the BBC reports, was awarded an impressive seven gongs in total — including Best Film, Best British Film, Best Director and Best Cinematography. Psychological thriller Joker also enjoyed a successful evening, taking home three awards including Best Actor for Joaquin Phoenix, while South Korean film Parasite emerged victorious in the Original Screenplay and Best Film Not in the English Language categories.