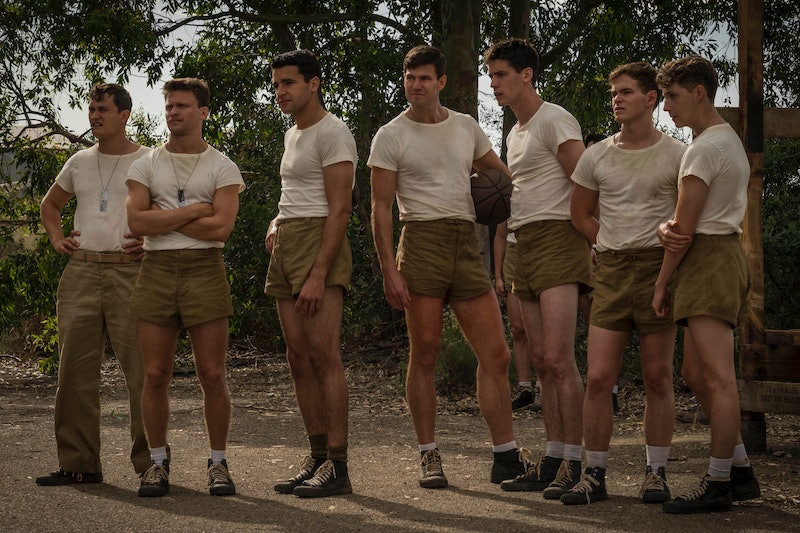 There are no shortage of movies and films that detail experiences of soldiers stationed overseas, but Hulu's Catch-22 mini-series is different. Here, combat isn't noble, grand, or even all that worthwhile. It's absurd, slow, and fought by men who sometimes don't want to be there at all. While many people might have brushed off or avoided Joseph Heller's 1961 classic novel, Catch-22, in high school English class, they shouldn't let that get in the enjoying the series. In fact, the show's themes are more relevant than ever. Probably because "there is never a bad time to talk about the insanity of war," as co-producer, co-director, and co-star George Clooney, told Entertainment Weekly.

Clooney's sentiment is shared by series co-writer Luke Davies, who told Forbes that he believes that, "Heller was very prophetic and this has become more apparent as we move more deeply into this age of anxiety and absurdity." The novel and the show are both prime examples of how absurdity isn't inherently funny, as the cruelty seen in Catch-22 doesn't feel far off from the cruelty that faces people in various ways in 2019, albeit not always in a military setting.

Here are some of the aspects of living in 2019 that Catch-22 portrays more effectively then many shows actually set in 2019.

The Difficulties Of Maneuvering Bureaucracy

The army considers Yossarian a coward, someone who is constantly trying to avoid battle and escape his duty as an American soldier. However — in many ways, he's simply acting on innate human trait to not die.

Yossarian goes up against an institution built on death in an effort to keep him and his friends alive, and is pushed down by that institution's bureaucracy time and time again. This treatment may remind viewers of their own experiences trying to maneuver complicated health insurance policies or people who are attempting to pay off their student loans.

The Influence Of Greed

Catch-22 is primarily Yossarion's story, but the commercial ascension of Milo Minderbinder makes up a major storyline happening concurrently with Yossarion's that Minderbinder embracing the chaos of war and making a profit. Minderbinder starts by trading in produce before moving onto bigger and better products, teaming his "syndicate" with the Germans to collect more and more revenue despite the danger that this commercial expansion brings to his own base. This act of chasing profit and endangering the people who profit can be compared to recent Facebook scandals, the 2008 housing crisis, or any instance in which people's attempts to maximize profit ruined lives.

How The Ruling Class Traps People In Loops

The fates that Yossarian and his fellow soldiers face can be traced back to the hubris and whims of their superiors. Davies tells Forbes that, "The novel is filled with crazy older men who are delusionally [sic] invested in the sense of their own glory and importance, and who are comically clueless." Davies believes that the description he lends to characters like Colonel Cathcart and Lieutenant Scheisskopf also fit the current tenants of the White House, "so it feels way more relevant even than it was a couple of years ago."

If Cathcart wasn't so busy raising the mission cap to prove that he's better than other Colonels in the army, there's a chance that a lot more of Yossarian's friends would've gotten to go home before their unfortunate deaths.

Catch-22 is a quintessential war story, and while war may not be first and foremost on many American's minds right now, the series still has plenty to say about what being an American in 2019 is like. Sadly, the series' universal themes will likely still be relevant fifty years from now as well.