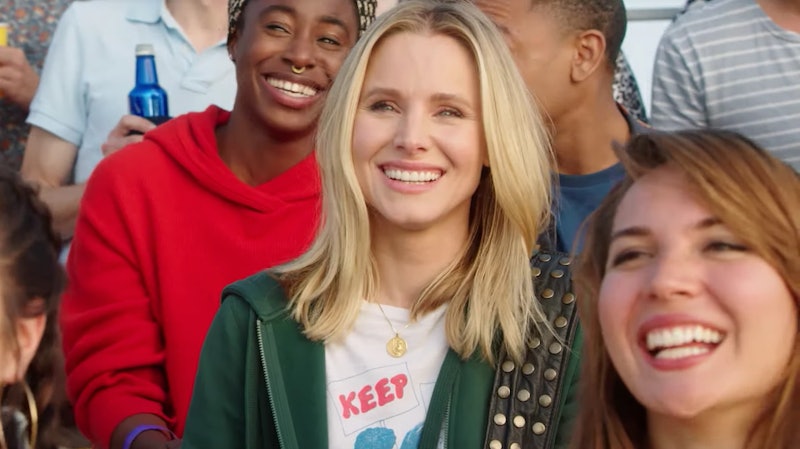 Kristen Bell's most beloved character is returning to the small screen with a bang — literally. The first trailer for Season 4 of Veronica Mars on Hulu teases what might be Neptune's deadliest threat thus far, and the very explosive new case that Veronica will attempt to untangle this time around. Thankfully, it seems as if her time away from fans hasn't softened Veronica's edge, as the clip kicks off with the private eye taking down a would-be-mugger with some quick thinking and a taser — and then stopping to take a picture "for the 'gram."

"Spring break was always sketchy, but this was worse," Veronica teases in a voice over, as the camera cuts from her smiling at Logan (Jason Dohring) on the beach, to an off-screen explosion and tourists running for cover. "Neptune was experiencing a crime wave." And that crime wave includes bombing attacks and even more sick acts of violence, all targeted, it seems, towards beach goers in the sunny, Southern California town.

In the revival of the beloved series, it looks like Veronica and her father, Keith (Enrico Colantoni) are tasked with finding out who is behind the rash of bombings all over the sunny, California town, and attempting to "ruin Neptune as a Spring Break destination." Just a guess, but it might have something to do with J.K. Simmons, who will play the series' newest villain, Clyde Prickett. According to the Hollywood Reporter, Prickett is an ex-con who works for for Richard "Big Dick" Casablancas, and is "the smarter and more dangerous of the two," and that's certainly evident from his brief, menacing appearances in the trailer.

Of course, Simmons isn't the only famous face joining the revival; the trailer also gives a prominent moment to Patton Oswalt's pizza delivery man — reportedly the "best pizza delivery guy in Neptune" — who has an obsession with true crime and who tells the detective to "follow the money." (Something tells us that Oswalt is going to play a key role in Season 4.) The clip also gives a brief look at Bell's fellow Good Place star Kirby Howell-Baptiste as Nicole, a nightclub owner whose patrons keep turning up dead.

As exciting as the introduction of the show's newest characters are, it's got nothing on the knowledge that LoVe is still going strong after ending up together at the end of the 2014 movie. Dohring was one of the first regular cast members to sign on to the revival, back in September, and it seems as if Logan and Veronica's off-and-on again relationship is officially back on — and based on that one, very steamy bedroom scene, they seem to be hotter than ever.

Naturally, all of those shirtless shots of Dohring (not to mention the adorable smile the pair share in the very beginning of the trailer) has fans plenty hot and bothered over the prospect of seeing their favorite TV couple back together on the small screen.

In addition to answering some important questions about Logan and Veronica's relationship status, the new season will also touch on some important issues that are relevant to the show's now-adult fanbase. "It’s definitely not going to be what we did on UPN or The CW. So I want to brace fans for that, that it’s going to be darker and bigger and more cinematic and definitely a little bit different," Bell teased in a September interview with SiriusXM’s Entertainment Weekly Radio.

"Particularly now, I feel like you wanna see a girl who's fighting for good. You wanna see a superhero without a cape who has nothing at her fingertips but her wit and her intellect and you want to see her better the world around her," she said, reflecting on how Veronica would fit into today's TV landscape. "I think people want to see a hero again. We had years of loving antiheroes and I think the world is too scary now. We loved Walter White when everything felt safer. It would scare me to watch a show about an antihero now. I want to see the good guys winning."

The state of the world — and of Neptune — might be incredibly scary and uncertain right now, but as long as fans know that Veronica Mars is on the case, it definitely feels as if there's a hero out there, protecting us.

More like this
Nicola Coughlan Shared A Lady Whistledown Excerpt From ‘Bridgerton’ Season 3
By Grace Wehniainen, Alyssa Lapid and Sam Ramsden
The 'Andor' Timeline, Explained
By Gretchen Smail
Alicent's Green Dress In 'House Of The Dragon' May Be An Act Of War
By Kadin Burnett
Netflix Reveals First Look At Wednesday In The 'Addams Family' Spinoff Series
By Bustle Editors
Get Even More From Bustle — Sign Up For The Newsletter