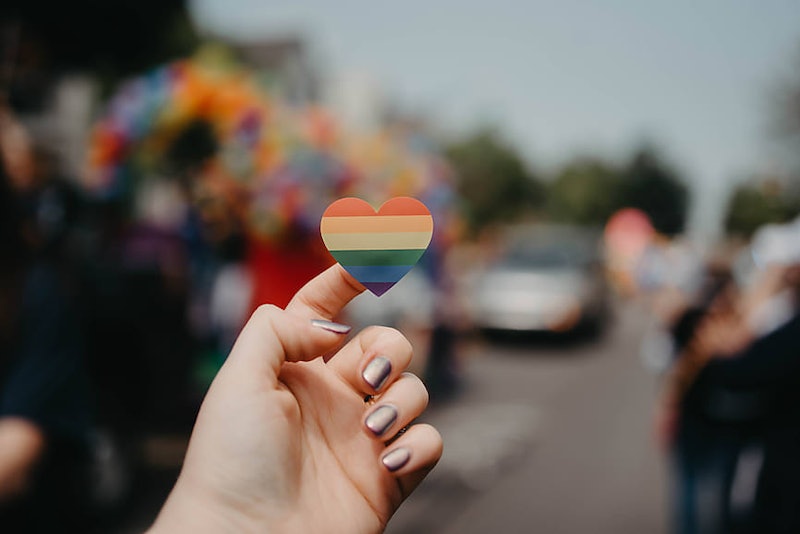 The first time I wrote a queer main character, I was 24 years old and “very straight.”

At least, that’s what I told myself as I wrote a sweeping tale of forbidden love between a closeted lesbian princess and her court sorceress. Their relationship was doomed from the start — in my fledgling attempt at novel writing, the princess was of course betrothed to the neighboring kingdom’s prince in order to end a war and save her people — but I fell in love with them all the same. My heart raced along with theirs with each lingering glance and seemingly innocent touch. And when the pair finally shared their first kiss? Even Straight Me could admit she swooned a little.

But I decided those feelings didn’t mean anything. This was all part of developing as a writer. It was my job to find a way to feel what my characters felt. There was no hidden meaning to the quickening of my own pulse or the pull I felt toward telling their story. Besides, I reasoned, I liked the straight couple in the other narrator’s chapters just as much. Despite knowing that bisexuality was a valid sexual identity, I stubbornly held onto the (internalized biphobic) belief that my interest in the heterosexual couple negated any possible queerness.

A couple of my critique partners were queer, however, and with their notes came a question.

When I finally shared this story with a variety critique partners, they had plenty of feedback. This was only my second novel attempt, and most of their comments were what you’d expect. There were plot holes and logical issues with the magic system. Some of the characters were overly abrasive because I’d neglected to fully develop their backstories in my attempt to avoid the dreaded “info dump.” I even had a couple sub-plots that made precisely zero sense and were ultimately cut wholesale.

A couple of my critique partners were queer, however, and with their notes came a question.

Sitting alone in my bedroom with my friends’ faces on my computer screen and my boyfriend playing video games in the other room, I wasn’t entirely sure I understood the question. At least, they couldn’t be asking what I thought they were asking. No one had ever questioned my sexuality before. No one had ever implied I could be anything other than straight. I mean, I liked men. I didn’t grow up having crushes on girls. At least, I didn’t think so. There was no reason for me to subconsciously ignore those feelings — I’d been a vocal ally since my early teens — so if I didn’t know I was queer at 23, then I must not be queer at all.

I fell in love with them more with each pass, but I waved away any acknowledgement that those feelings might mean something about me.

After a moment of hesitation, my friend clarified the question. My response came quickly after that, with more emphasis that I care to admit.

Knowing looks passed between my queer friends, but they didn’t push the subject. They continued with their notes, and I went on to revise the novel, further developing my characters. I fell in love with them more with each pass, but I waved away any acknowledgement that those feelings might mean something about me.

For many novelists, our first — or second or third or fourth — completed manuscripts don’t ever make it into bookstores. So when I sent my lesbian princess off to agents in the hopes of securing representation, I dove head first into a new project. This time, I stepped away from queer characters. At least, I thought I had.

I was consumed by the idea of an accused witch, on the precipice of her execution, and the young man who had been foolish enough to fall in love with her. I told the story from the point of view of the young man, and as he fell for his unusual new neighbor with a cupboard full of herbs and crystals, I fell for her, too. She captivated his heart and stole mine in equal measure. As I continued the first draft of the story, the boy’s sister eventually fell for the witch, too.

“It wasn’t planned,” I told a friend as I described this new twist. “I was writing and it just sorta… happened.”

Neither of us questioned how often queer characters were supposed to pop up unannounced for straight writers. Neither of us said aloud that maybe there was a reason queer girls showed up in every single one of my stories. It wasn’t just the novels, either. The short story I wrote for my local writing group included a kiss between two girls as a means of swapping their souls.

In retrospect, the deep depths of my denial is truly mortifying.

After I revised and sent this third novel off to agents, I wasn’t sure where to go next. None of my ideas held my interest for more than a couple pages until Hannah Walsh walked fully formed into my head.

From the moment she appeared, I knew there was something different about this character. She wore sarcasm like armor and worked a summer job where she reluctantly sold magic supplies to the tourists of Salem, MA. Hannah was also my first unabashedly out and proud character. She was, in her words, “a huge lesbian,” and when she stepped onto page one, she was still reeling from her first major breakup. With the girl who pulled her out of the closet, no less. A girl she’d been friends with forever before they fell in love and dated for a year.

Hannah’s voice came out more naturally than any other book before, perhaps in part because I had also recently gotten out of a long-term relationship and was relearning what it meant to be single. Yet I started to question whether I was the right person to tell her story. Sure, the driving plot of this magical thriller was the threat to Hannah’s coven rather than a coming out narrative, but I still wasn’t sure a self-proclaimed “very straight ally” was the best person to tackle such an openly queer character.

Near the end of drafting the book that would be come my debut novel, I finally acknowledged crush-like feelings on another woman.

I wrestled with this question through most of the first draft of Hannah’s story. Writing about my queer Salem witches felt different than any of my previous books. Sure, that fluttery heart feeling was there again. It popped up any time I wrote scenes between Hannah and her ex — scenes where they fought and kissed and maybe wanted to get back together and maybe didn’t — but that feeling started to extend past the page. It started to bleed into my everyday life. I started to feel that way about real women, not just fictional characters.

Near the end of drafting the book that would be come my debut novel, I finally acknowledged crush-like feelings on another woman. Yet still I couldn’t quite claim the queer label for myself. I had been so loud about being straight for so long, that the thought of telling my friends and loved ones “oops! Just kidding! I’m totally queer!” was too mortifying to even consider. I tried really hard to lock those feelings up where I wouldn’t have to look at them too closely.

Then one day in June of 2015, when I was 26 years old, I sat alone in my apartment. I was scrolling through my Twitter feed in an attempt to avoid facing the very queer novel I’d finished the month before. I stumbled upon a personal essay about one woman’s experience with bisexuality, and as I read her story, something inside — something fed by three years of fictional exploration and hundreds of thousands of carefully crafted words about queer characters — finally clicked.

My heart whispered a resounding “yes!” and then, with an exasperation louder than the embarrassment of being wrong about my identity, “finally.”