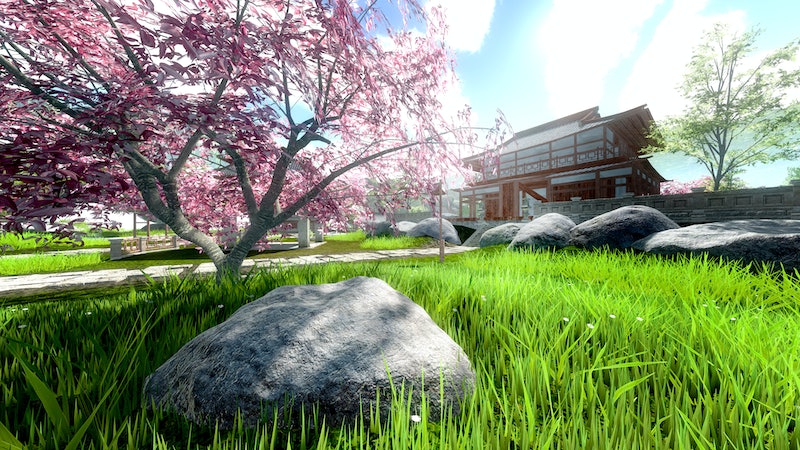 For me, meditation is like power-walking. I usually put a lot of work into preparing myself, mind and body, for both, but though I start out excited, I usually end up coming out of doing what I set out to do feeling like I didn't actually get anywhere. For walking, this is easily solved by heading out to unexplored locales like parks and beaches. When it comes to meditation, however, I've been in a months-long rut. But it turns out there actually are options out there for exploring different locations during meditations, and the secret lies in virtual reality (VR).

I learned a long time ago that closing my eyes while doing meditation doesn't work well for me. I'm always hyperaware of my surroundings, and closing my eyes makes me more attuned not only to my breath and heartbeat, but to the faint scrabble of my cats chasing each other in the kitchen, or the shouts of neighbors and the sounds of cars in my busy neighborhood.

So when I was invited to test out an Oculus Go, the idea of using it for meditation was extremely appealing for me. VR was something I'd always wanted to try, as both an avid gamer and someone who grew up wishing things like the holodeck in Star Trek were real, but most units cost $500 and up, making them difficult to snag. The Go, though, is $199 for the 32 gigabyte version and $249 for the 64 gig version, and it's an entirely self-contained headset that doesn't require any other consoles or devices (save an iPhone or Android for setup via an app).

The Go is accessible and easy to use, and while I fully admit folks going into VR for the first time may have to lower their graphics expectations after seeing things like Black Mirror, this headset does provide an immersive experience that carries over from action games to quieter Oculus apps like Guided Meditation VR, the app I used to test whether meditation in VR would work for me.

Guided Meditation VR has 27 different environments you can choose from: a sun-dappled redwood forest with leaves drifting down around you, a snowcapped mountain under the northern lights, an underground cave where softly glowing mushrooms and the steady dripping of water surround you, and so many more. While I was meditating, I picked locations that were relaxing for me, so I could let my eyes wander while I meditated, rather than forcing myself to keep them closed. Being able to switch up my location from day to day, or even meditate 10 minutes here and 10 minutes in another place in one session, was super freeing for me.

If you've never used VR before, it can be a trip to go from the real world to the virtual world. The first few times I "entered VR," as the Oculus Go prompts you to do each time you turn it on, I got dizzy no matter what I was doing, including sitting still in meditation. But once my body and brain had adjusted, I started to relax every time I strapped on the headset, the same way I relax walking into a favorite bookshop.

It's easy to think of VR as something only for gamers, or something only action-oriented, but my experiences with meditating in VR show there's more that can be uncovered in the virtual world. For me, the Go opened up an entirely new way to practice meditation, one that's not only flexible and customizable, but changeable, and, I won't lie, a little magical, too.

More like this
Everything You Need To Know About The Samsung Galaxy S23 Ultra’s New Camera
By Alexis Morillo
Samsung's New Phones Have Amazing Cameras & Come In 8 New Colors
By Alexis Morillo
Ashamed Of Your Screen Time Stats? Here's How To Change That
By Alexis Morillo
How To Turn Off TikTok Profile Views So You Can Stalk Other Accounts In Secret
By Alexis Morillo
Get Even More From Bustle — Sign Up For The Newsletter
From hair trends to relationship advice, our daily newsletter has everything you need to sound like a person who’s on TikTok, even if you aren’t.