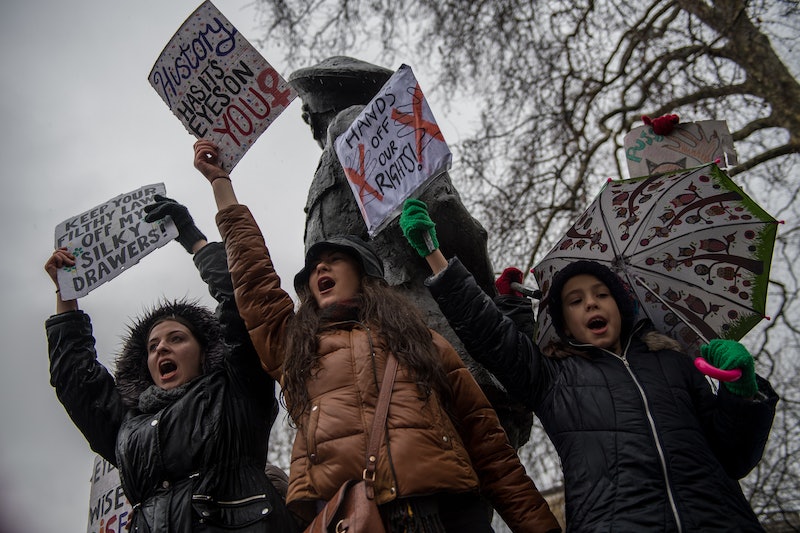 It’s a novel that’s been described as everything from ‘highbrow pornography’ to a metaphor for its author’s immigrant experience of America. In an essay that concludes the 50th anniversary edition of Lolita, Russian-American novelist Vladimir Nabokov defends his novel on the premise that it wasn’t written to be lewd, but rather if his most controversial book — about the sexual exploitation of 12-year-old Dolores Haze (aka: “Lolita”) by her predatory, middle-aged stepfather Humbert Humbert — is a metaphor for anything, it’s of the author’s relationship to the English language, one that he described as “second-rate” to his native Russian. Perhaps then, what Lolita is more than anything, is a novel — one that still finds itself on many a high school required reading list — that’s time is up.

Nabokov’s defense of his novel makes sense. The most startling fact of Lolita is that it’s actually a beautiful novel, at least in terms of language and syntax, the rhythm of reveals, Nabokov’s irrepressible knack for alliteration. It is cringingly pleasing to read Lolita — if you can focus on the sheer musicality of the language in favor of forgetting that you’re reading about the sexual assault of a child by the man who effectively kidnapped her under the guise of stepfatherhood. But in the wake of the #MeToo and Time’s Up movements, can Lolita be read as anything but a story of predation, depravity, exploitation — and specifically, rape — no matter how stunning Nabokov’s prose might be?

From literally page one Lolita is so overtly misogynistic it reads almost as a parody of the systemic abuse of girls and women by men. Nabokov, writing the foreword to Lolita as the fictional psychologist John Ray Jr, reveals that Lolita’s name — that is, Dolores Haze — has been hardly altered from her real name; and furthermore it doesn’t really matter because all a curious reader would have to do is peruse local newspaper archives to discover the identity of our antagonized protagonist anyway. Humbert Humbert, on the other hand, is hidden behind a complete pseudonym.

But in the wake of the #MeToo and Time’s Up movements, can Lolita be read as anything but a story of predation, depravity, exploitation — and specifically, rape — no matter how stunning Nabokov’s prose might be?

Within days of meeting what Humbert refers to as a “nymphet” he’s referring to "his" Lolita in the possessive — going so far as to strip young Dolores of her name and rename her “Lolita”, and displaying a sense of comfortable familiarity and ownership that nearly creates the illusion the two are co-conspirators, rather than abuser and victim. "I want my learned readers to participate in the scene I am about to replay," Humbert says, before launching into his description of his first sexual gropings, thereby making any and all witnesses complacent in Dolores's abuse as well. It's a cycle of powerlessness: Dolores is powerless to defend herself, and the reader is too far entrenched in Humbert's consciousness to save her.

In a manner all too familiar, Humbert frequently interprets the laughter, eye flutters, twitches, and fidgets of his young victim as gestures of consent. “She laughed, and brushed past me out of the room. My heart seemed everywhere at once,” Humbert notes, upon kissing Dolores on the mouth for the first time. Then, later, when he repeatedly gropes her: “She, to, fidgeted a good deal so that finally her mother told her sharply to quit it.” Later, when Humbert effectively drugs Dolores in order to abuse her in her sleep (Bill Cosby, anyone?) he says: “I held her. She freed herself from the shadow of my embrace — doing this not consciously, not violently, not with any personal distaste…” Humbert expects us to believe him, and undoubtedly some readers do. He is the only voice of authority on this matter, after all. He has gone to great lengths, as he later describes, to ensure Dolores's silence.

"In a manner all too familiar, Humbert frequently interprets the laughter, eye flutters, twitches, and fidgets of his young victim as gestures of consent."

In stating his case — proclaiming his abhorrence all the while justifying his actions — Humbert utilizes one of the oldest (and most fallen-for) tricks in the misogynist playbook: the relevance of a woman’s sexual history in establishing — or rather, refuting — her victimhood. “Why then this horror I cannot shake off?” Humbert asks. “Did I deprive her of her flower? Sensitive gentlewomen of the jury, I was not even her first lover.” Here, Humbert refers to the first, coming-of-age sexual experiences Dolores has at summer camp, measuring his pedophilia against the woodland pettings of preteens.

And then, finally, the absolute silencing of Dolores. “From the very beginning of our concourse, I was clever enough to realize that I must secure her complete cooperation in keeping our relations a secret, that it should become second nature with her…” he writes. Indeed, this silence is one that has become second nature to generations of women. A few of Humbert’s tried-and-true tricks: telling Dolores their relationship is normal, that all the girls do it, that nobody will believe her if she tells, if she does tell and is believed she’ll ruin his life, it is her obligation as a young woman to play the role of a people-pleaser, if she speaks her truth she’ll be treated as a co-conspirator. Pages of Lolita are spent detailing Humbert’s myriad ways of compelling Dolores into silence, and they work. The novel concludes without Dolores having said a word to anyone about the abuse she endured, ever. She's unable to even put words to her experience when faced with Humbert himself, as a married woman. Her story is told the way these stories have been told for generations: in the words of men.

In stating his case — proclaiming his abhorrence all the while justifying his actions — Humbert utilizes one of the oldest (and most fallen-for) tricks in the misogynist playbook: the relevance of a woman’s sexual history in establishing — or rather, refuting — her victimhood.

I was nearing the end of high school when I first read Lolita, and embedded in a curriculum that included novels like The Scarlet Letter, The Color Purple, and Speak, the exploitation of Dolores Haze was entirely normalized. The inherent unreliability of Humbert Humbert was not something that made any particular impression on me, be it my own bias or a glaring omission by my English instructor. “I am going to tell you something very strange,” Humbert says to his readers. “It was she who seduced me.” And it must have been so. In the decade plus between the last time I flipped through the pages of Humbert Humbert’s confessional and now, I’d imagined Dolores had, somehow, deserved it. She must have been an insatiable siren in a preadolescent body. (12-years-old, after all, is not so far away from 15-years old, and if you’ve spent a lifetime absorbing the message that any violence inflicted upon your own body is deserved — be it the clothing you wore or the party you went to — you’re very likely not going to see Dolores's innocence either.)