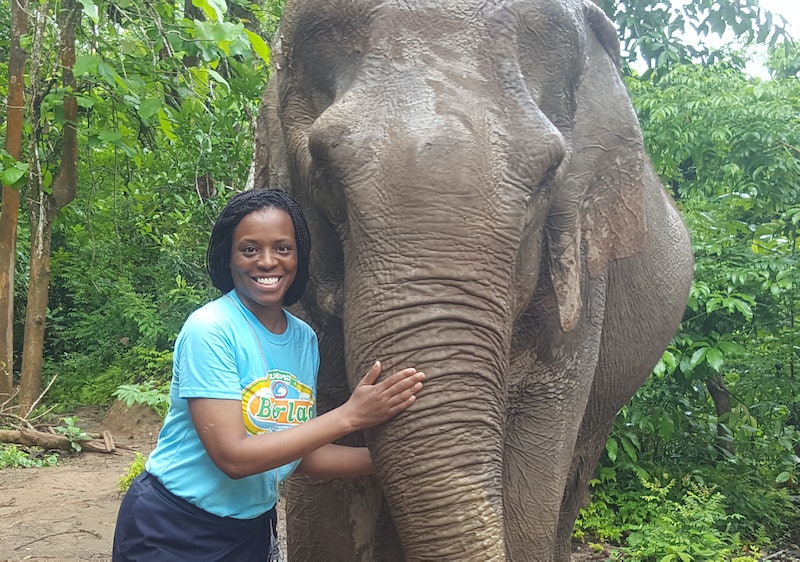 When I quit my job to travel the world full time, I stuffed my dog-eared paperback of Go Girl! The Black Woman’s Book of Travel and Adventure in my 75-liter backpack. After all, it was the catalyst for me dumping my Manhattan newspaper job for Latin America.

Elaine Lee’s anthology of 52 travel stories written by black women introduced me to a new world: These brave souls had journeyed to Alaska and Australia, China and Colombia, Innsbruck and Ulcinj. They lost their way, found acceptance, expanded their horizons, and took the trips of their dreams. Their stories were brain awakeners. Their stories let me know I wasn’t alone.

Lee’s anthology, published in 1997, was the first of its kind, so it wasn’t a hard sell to publishers. As such, distinguished writers were eager to contribute — including Maya Angelou, Audre Lorde, Gwendolyn Brooks, Jill Nelson, and Alice Walker. Lee's own journey was as inspiring as those of her contributors: At 38, she decided to semi-retire and take a trip around the world. I knew no one who had done that, but I re-read the book until eventually, I decided to follow in her footsteps.

They lost their way, found acceptance, expanded their horizons, and took the trips of their dreams. Their stories were brain awakeners. Their stories let me know I wasn’t alone.

Since then, many more memoirs about traveling the world have been released — probably most famously Eat, Pray, Love by Elizabeth Gilbert. Her search across Italy, India, and Indonesia inspired many women to follow in her footsteps and their bliss, or at least fantasize about it. Why not? A whopping 10 million copies of the book are in print. The book was a fixture on the New York Times bestseller list for more than 155 weeks. Moviegoers also got a chance to learn about Gilbert’s safari of self-discovery as she (played by Julia Roberts) ate "exotic" food, meditated in "foreign" places, and fell in love abroad.

Eat, Pray, Love inspired a litany of copycat articles and books, written by other Lost Girls, almost always by white women. Women of color didn’t live like this – or they didn't have a chance to write about it.

A cursory search of “best” or “inspiring” travel memoirs yields the usual suspects: Jon Krakauer (Into the Wild and Into Thin Air), Bill Bryson (A Walk in the Woods), Paul Theroux (The Great Railway Bizarre), Rolf Potts (Vagabonding), or Peter Mayle (A Year in Provence), with sprinklings from James Baldwin. And white men oft seemed to be the only ones venturing into Asia or Africa. "Best" or "inspiring" book lists almost never include a person of color.

Lee thinks the representation on the shelves is adequate, however, given that people of color haven't been traveling long. Until the 1960s, blacks in the south were subjected to Jim Crow and apartheid laws, and were not allowed to eat in most restaurants, stay in motels, or use most public, which made travel incredibly challenging. As a result, travel was almost solely to seek work, attend funerals or family reunions.

She recommended a list of books, many of which I’ve read, including Kinky Gazpacho by Lori L. Tharps, An African in Greenland by Tété-Michel Kpomassie, and Finding Martha's Vineyard by Jill Nelson. I compiled my own Goodreads list, after not finding more recommended travel narratives, adding Dirty Blonde and Half-Cuban by Lisa Wixon, A Stranger in the Village edited by Farah J. Griffin and Cheryl J. Fish, Transwonderland by Noo Saro-Wiwa and the sojourns of Pico Iyer. But where were the other Latinos and Asians? The list is lacking.

"Best" or "inspiring" book lists almost never include a person of color.

As the travel movement diversifies, the blogs and self-published books multiply, but mainstream publishers still aren’t investing in travel writers of color. Additionally, stories by travelers of color tend to focus more on practicalities, like when to buy tickets and what they enjoyed on trips, and less so on their inner journeys, says Lola Akinmade Åkerström, an award-winning travel writer and photographer who self-published Due North, a collection of her travel tales. “Because I write a lot more service-type travel writing, I wanted to show that this is actually the type of travel writing — narratives and creative nonfiction — that I love to do. And more importantly, show the next generation of black travelers how I experienced the world as a Nigerian travel writer and photographer over 20 years,” she told me in an interview. For one of her assignments, she followed Kpomassie’s footsteps in Greenland.

“Because I write a lot more service-type travel writing, I wanted to show that this is actually the type of travel writing — narratives and creative nonfiction — that I love to do. And more importantly, show the next generation of black travelers how I experienced the world as a Nigerian travel writer and photographer over 20 years.”

Rahawa Haile, an Eritrean-American writer, created a library of black authors and amassed a legion of fans while on a six-month hike on the Appalachian Trail from Georgia to Maine in 2016, a journey that’s typically completed by a demographic that's overwhelmingly white and male. This year, she’s writing a book about her hike for Harper Books.

I look forward to reading more physical and emotional journeys like hers and hope a more diverse canon can illuminate and normalize non-white travel. Then, perhaps, white travelers will no longer stop me on my journeys and ask “What are YOU doing here?”