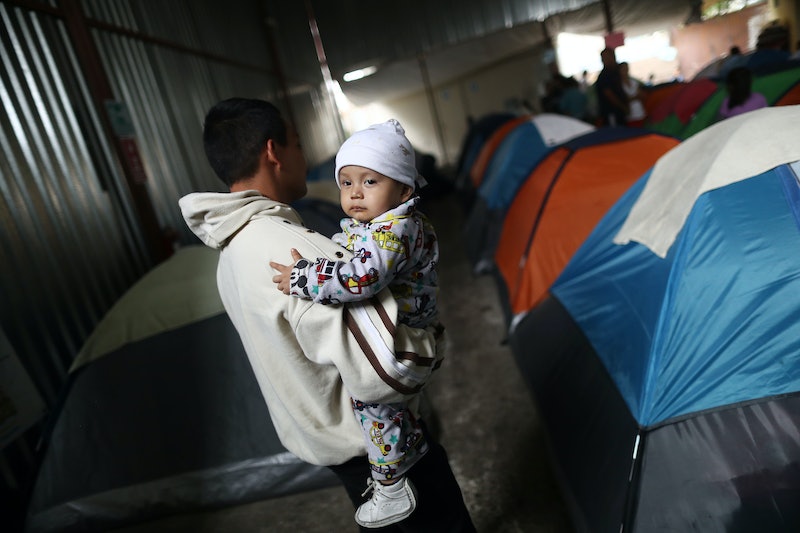 A year after President Donald Trump's "zero tolerance" immigration policy resulted in thousands of children being separated from their families at the US-Mexico border, the Trump administration has said that it would need time to account for every family potentially impacted — considerable time. In court documents filed Friday, the Trump administration conceded that it may take up to two years for the government to identify immigrant families separated at the border, the Associated Press has reported.

"Defendants estimate that identifying all possible children ... would take at least 12 months, and possibly up to 24 months," Reuters reported the Justice Department wrote in court documents filed late Friday. According to the news outlet, Friday's filing was the first time the government had outlined its plan for identifying additional families that may have been separated as a result of Trump's "zero-tolerance" policy.

The government told the court it planned to use data analysis, statistical science, and manual review to ID children and families that may have been separated by authorities at the border, Reuters reported. However, it added that available manpower, the potential for follow-up meetings, and the efficacy of the predictive statistical model used could all impact how long the process took.

According to the Associated Press, the Justice Department has claimed that it has nearly 50,000 cases of unaccompanied minor children being taken into government custody between July 2017 and when the court order halting the administration's practice of family separation was issued in late June 2018. The agency told the court Friday that reviewing these cases would take at least a year. Under the Trump administration's plan, cases would be reviewed first for traits the government believed would most likely imply separation, such as noticeably young ages, the Associated Press reported.

Friday's filings come nearly three months after a report from the Department of Health and Human Services' Office of Inspector General revealed that thousands of additional children had been pulled from parents or guardians by immigration authorities on top of the already identified 2,737. A federal judge ruled last month that the government could be held accountable for reuniting these additional families as part of the class-action lawsuit the American Civil Liberties Union (ACLU) brought against the administration in 2018.

In a statement, the ACLU said it was "strongly" opposed to any plan that would allow for the government to take up to two years to identify children potentially separated from their families as a result of the president's immigration policy. They accused the Trump administration of having refused to treat the crisis created by family separations at the border with urgency. "The government swiftly gathered resources to tear families apart," the legal nonprofit said. "It must do the same to fix the damage."

In January, HHS' Office of the Inspector General confirmed that the total number of children separated under the Trump administration's immigration policy was unknown as the office had "faced significant challenges in identifying separated children." Those challenges included "the lack of an existing, integrated data system to track separated families across HHS and DHS and the complexity of determining which children should be considered separated," its report stated.

According to the Associated Press, the next hearing in the ACLU's class-action lawsuit against the Trump administration's family separation policy is scheduled for April 16.