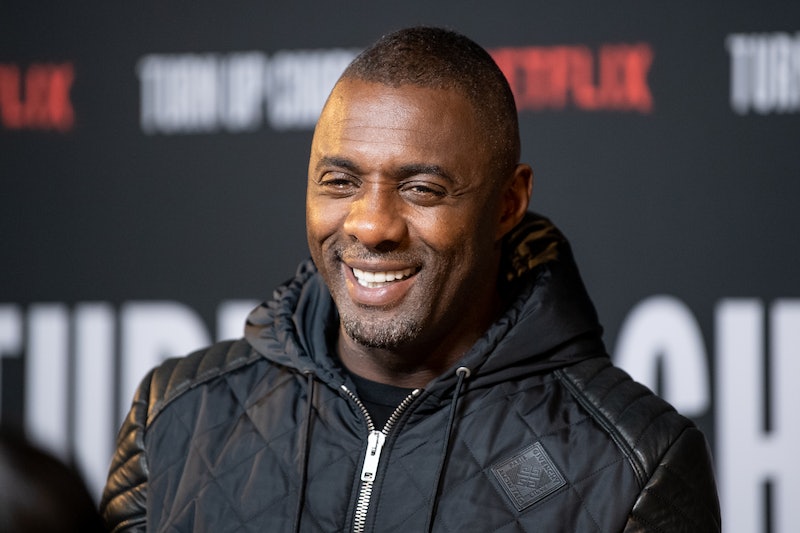 Sorry, James Bond, but Idris Elba already has a brooding, heroic law enforcement character that he's more than happy to keep playing for the rest of his career. In a recent interview with Entertainment Weekly, it was revealed that Elba wants to make a Luthor movie after Season 5, so fans don't have to wait so long between seasons.

Despite seeing his fame and career skyrocket in recent years, Elba revealed that he'll never get tired of stepping into John Luther's iconic tweed coat. He's played the character since 2010 — Season 5 premieres in America in June — but he said it doesn't get old. "It’s one of those career characters," the newly-married actor said. "I’ve been addicted to the lifestyle and expressive nature of Luther for a while." But while he doesn't see himself walking away from the brooding detective any time soon, Luther's willingness to embrace his dark side takes a massive toll on Elba.

"I always find myself needing therapy both before and after I play him," Elba continued. "Afterwards, I need a nice break, I get to reset, it’s often when I make really good music or DJ great sets, because I’ve been in such a dark place for a long time that it’s nice to get out." He's even used Luther as inspiration for his music in the past, and released the album Murdah Loves John in 2015.

Despite his longstanding love of the character, there is one major change that Elba would like to make to the show. The actor confessed that, after Season 5 of Luther, he thinks it's officially time for the infamous DCI to make the jump to the big screen. "I think we should be changing format now," he told EW, explaining his hopes for a Luther movie. "The last few seasons have been more like mini-movies, and film allows us to now have more dramatic pin points moments that are slightly more compressed and it’s a bigger but smaller dose of Luther."

Elba isn't the only one hoping to turn Luther into a movie; in December, the actor told Variety that the show's creator, Neil Cross, was developing a film adaptation of the beloved TV drama. "We are really advancing on getting a movie version [of the show] up on the screen," Elba said at the time. "Neil is beavering away on writing this thing, and I think the remit for the film is to scale it up," describing the film as containing, "more murder, more Volvos, more frowning Luther."

In fact, the actor also noted that the upcoming Season 5 — which premieres on BBC America on June 2 — is meant to serve as a transition between Luther the show and Luther the potential movie. "This one’s very particular because I think it’s one of our last TV installments – I shouldn’t say that as a matter of fact, but it was designed in the sense that Neil’s and my ambition is to take it to a larger screen," he said, according to Drama Quarterly. "We paid attention to what we were writing in this show. If we are to make a movie, this show is essentially a segue to that."

That might be one of the reasons why the show brought back Luther's longtime foe, Alice (Ruth Wilson), despite her supposed death between Season 3 and Season 4. "There is no Luther without Alice," Elba told EW about her return, stressing the importance of their twisted, codependent relationship. "She’s the bad guy that will never die."

Elba continued, "It’s the unnatural element that feels natural. It’s like the pit bull and the cat chilling out; you expect by nature that something might be off here, but what you actually get is a sweet harmony, which might not be really sweet, but they get each other — and they also get each other into trouble." (Just imagine how much trouble they could get each other into on the big screen, rather than just in a TV show.)

As long as Elba is happy to play DCI John Luther, fans will be more than happy to keep watching his adventures onscreen. The only difference is that if Elba gets his way, those adventures will be much larger, much darker and feature Luther's iconic coat, 15 feet high.

More like this
Paul Mescal, Man Of Mystery
By Samantha Leach and Heather Hazzan
Here’s Everything Coming To & Leaving Netflix In October
By Jake Viswanath
What’s New On Netflix: Ana De Armas’ 'Blonde' & A Nick Kroll Special
By Arya Roshanian
'Peaky Blinders' Creator Shares Exciting Update On The Upcoming Film
By Sam Ramsden
Get Even More From Bustle — Sign Up For The Newsletter