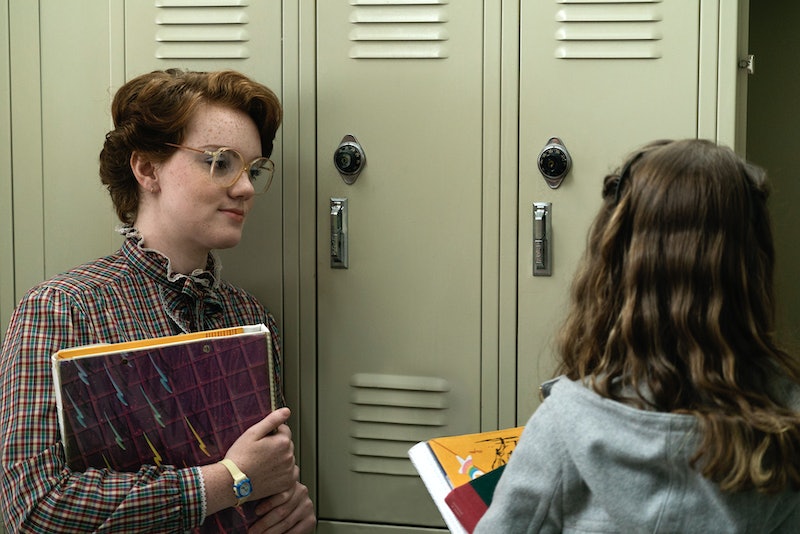 By now you've probably gobbled up Stranger Things Season 2 like Eleven working her way through a stack of Eggos. But just in case you're trying to savor your return to Hawkins, then you should be aware that this article contains spoilers for Stranger Things Season 2. In a recent interview with Digital Spy, Shannon Purser revealed her hopes for Barb's future — you know, if the beloved character had survived Season 1.

Nancy's best friend didn't last long in Hawkins, but she made an instant connection with the show's fans. Barb was every awkward kid at the party trying to keep their best friend from doing something stupid. Her no nonsense attitude, combined with her rocking '80s style, made Barb an instant favorite, and led Stranger Things devotees to campaign for Justice for Barb.

Well, justice is served in Season 2, thanks to Nancy and Jonathan going on a crusade to expose the Hawkins Lab cover-up of Barb's death. At long last Barb's parents can stop waiting for their daughter to come home, and Nancy got the chance to mourn her loyal BFF. Knowing Barb hasn't been forgotten is reassuring, but the one thing that would've been more satisfying than justice is a future for Barb. Sadly, the character will never have that onscreen, but Purser has some ideas about what her iconic character's life could have been like if she hadn't taken that unfortunate detour into the Upside Down.

If Purser had her way, Barb would have grown up to fight for the little guy. The actor told Digital Spy,

"I feel like I see her being like a lawyer or a very socially conscious, high powered woman. I think people need advice, and Barb was pretty good at giving it. I'm proud of her. I think she would do well."

Go ahead and cry, Barb deserves all of your tears. Purser's image of Barb as someone who is excellent at dispensing advice and knows what she wants out of life lines up perfectly with what was shown in Stranger Things Season 1. Barb came off as someone who suffered no fools, but she was also a loving and supportive friend who waited for Nancy, even though she thought her bestie was making a mistake.

Her caring nature ultimately put her in the path of the Demogorgon, but somewhere, in an alternate universe, Barb is living her best life. Hey, if there's an Upside Down, maybe there's another dimension where Barb grew up to be a social justice warrior and kick-butt '90s woman.

Even though Barb is no longer part of the Stranger Things gang, Purser's career is just getting started. Barb would definitely be impressed by the career moves that her portrayer has made since her exit from the hit Netflix series. First, Purser appeared in multiple episodes of Riverdale as Ethel, before starring in the horror movie Wish Upon. Up next she'll be playing one of the lead characters in the new Jason Katims' series Rise.

The show, which focuses on a high school drama club, is set to premiere on NBC this spring, and Purser will not only be acting in the series, she'll likely be singing as well. It's no Stranger Things comeback, but Purser's new role is one her fans should be excited about — Barb definitely would be (come on, you know she was in the Hawkins Drama Club).

Season 2 served up justice for Barb, but the idea of her becoming a lawyer or a professional dispenser of sage advice is so good it'll probably make fans want to start a new hashtag. Hey, if #JusticeForBarb worked, why can't #FutureForBarb? Because this amazing character deserves a happier ending.

More like this
Caleb McLaughlin Details Racism From 'Stranger Things' Fans
By Radhika Menon
Kate Bush Revealed The Real Meaning Behind 'Running Up That Hill' Lyrics
By Darshita Goyal
Here's What Jeffrey Dahmer's Dad Has Said About His Other Son, David
By Grace Wehniainen
Where Is Lionel Dahmer Today? Jeffrey Dahmer’s Father Reflected On The Serial Killer’s Death In 2020
By Brad Witter
Get Even More From Bustle — Sign Up For The Newsletter