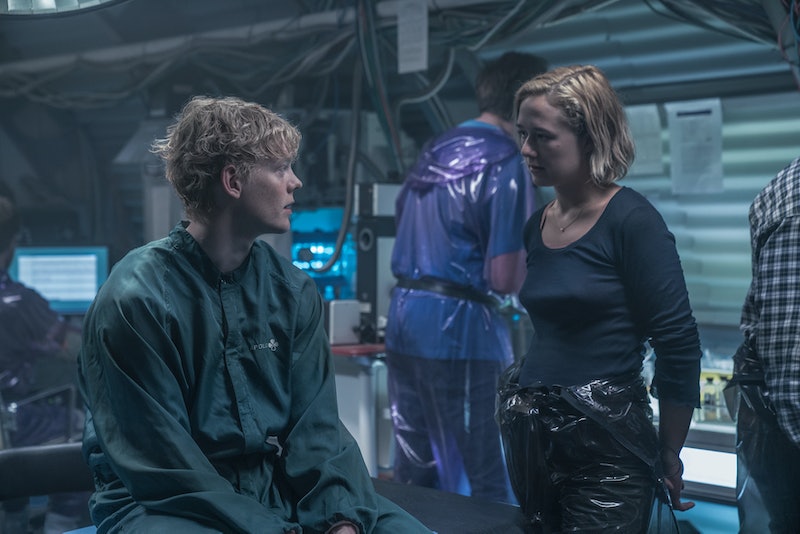 The Rain has returned for a second season of apocalyptic drama. And though Netflix has yet to officially renew the series, a Rain Season 3 feels very likely. There's a lot of story to dig into with the Danish series, and if its new episodes are any indication, it will only continue to evolve.

The Season 2 trailer opens with Rasmus, who is the key to finding cure, getting tested at a facility to figure out how it's possible that he's been infected with the virus without dying. He writhes on a steel bed as black energy emits from his body, killing every person in the room.

A group of scientists conclude that the virus is controlling Rasmus’ immune system, and that they must get to him before he learns how to control it. Meanwhile, a large group of people are given a projection of Rasmus and told that the first people to bring him in will be set free. So, it's looking pretty bad for Simone, Rasmus, and the rest of the crew.

The trailer ends with Martin telling Simone that Rasmus is dangerous and out of control, but she insists that it's her job to save her brother. There's a series of action clips as the crew dodges baddies and possibly gets into a bit of infighting before it all ends with Rasmus standing in a street alone. There are visible veins pulsing on his face before he opens his eyes to reveal darkened pupils.

Based on that, The Rain's second season will set up a tense dynamic between Rasmus and the rest of the survivors that could continue to play out in Season 3. Will he be on the run, trying to fight for his life? Will he be full-on evil, and duking it out with everyone trying to bring him down? That depends on where the finale leaves things, but either way, we should have Season 3 news soon.

Per Variety, Season 2’s renewal came just weeks after the first season made its debut in May 2018, which means there is a chance that Netflix will make a decision about whether or not The Rain will continue within the next few weeks. Right now, it's looking likely that the series will return. Even beyond the amped up plot, Netflix has been investing heavily in its foreign-language content, so clearly, there's an interest there. The streaming service has also rubbed fans the wrong way recently with the cancellation of shows like One Day At A Time, Sense8, The Get Down, and all of its Marvel properties, so giving yet another show the axe might not go over well.

If a Season 3 does happen, fans can reasonably expect The Rain to come back in May 2020, since its two seasons so far have both been released around that time. In the meantime, Season 2 should have plenty of action and plot twists to tide you over. Here's to hoping that Rasmus' storyline will lead to some good news for this epic show.