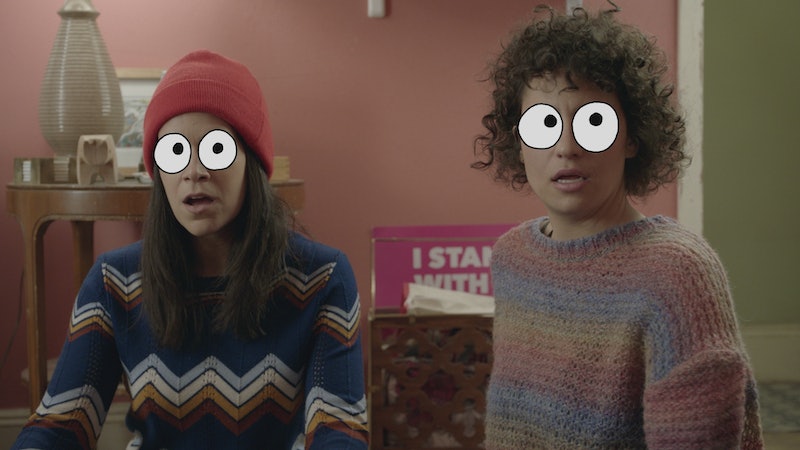 Breaking up in the era of social media regularly leads to cyberstalking the ex. Although Ilana has tried to maintain her carefree attitude after Lincoln broke up with her on Broad City in Season 3, the death of their relationship is still very present in Season 4. She already had to confront him face-to-face in "Just The Tips," but the Oct. 11 episode "Mushrooms" has Ilana dealing with Lincoln's internet presence after a mushroom trip.

Although Abbi and Ilana's magic mushroom use dominates the Oct. 11 episode (complete with psychedelic cartoon versions of themselves by artist Mike Perry), the end of the episode has Ilana going down an internet wormhole as an unhealthy coping mechanism due to Lincoln having a girlfriend. And it's yet another realistic, albeit very delayed, step forward for Ilana.

While Ilana has never passed up an opportunity for sexual exploration, her mind is not allowing her body to cooperate. (Ah, yes, that pesky mind-body connection.) Even when presented with the chance to peg a man — something she was so proud of Abbi for doing back in Season 2 — she is unable to perform. But her inability to get turned on is only compounded by the fact that she starts seeing hallucinations of a cartoon Lincoln in a toothbrush and in a suitcase. As always, he's delightful and even encourages Ilana to pursue her pegasus dreams, but it only makes matters worse.

Ilana sees Lincoln earlier in her trip, but him entering her brain as she's trying to give herself a sexual pep talk officially puts an end to her sexual fantasy come true. And no amount of punching her vagina will help. This incident leads to Ilana finally doing the inevitable — looking at Lincoln's social media to torture herself with posts about him and his girlfriend — in the fourth and final act of the episode. It's a familiar scene for modern daters and even with Abbi by her side and copious amounts of weed, it's still a rough emotional journey. Although Ilana's usually good at burying her feelings and deluding herself, you can tell she barely believes it when she says, "I wouldn't want that kind of intimacy."

So while "Mushrooms" doesn't seem to be the last that Broad City fans will see of Lincoln (cartoon version or otherwise) in Season 4, the episode may mark Ilana's true acceptance that Lincoln has moved on. And don't worry, Ilana fans — there's sure to be more sexually adventurous opportunities in your girl's future, if that's what she really desires.

More like this
Nicola Coughlan Shared A Lady Whistledown Excerpt From ‘Bridgerton’ Season 3
By Grace Wehniainen, Alyssa Lapid and Sam Ramsden
'Elite' Season 6 Is Arriving Sooner Than You Think
By Gretchen Smail and Grace Wehniainen
The 'Reasonable Doubt' Cast Includes A 'Save The Last Dance' Reunion
By Grace Wehniainen
This House of the Dragon Character Will Create Another Scandal For Rhaenyra
By Kadin Burnett
Get Even More From Bustle — Sign Up For The Newsletter