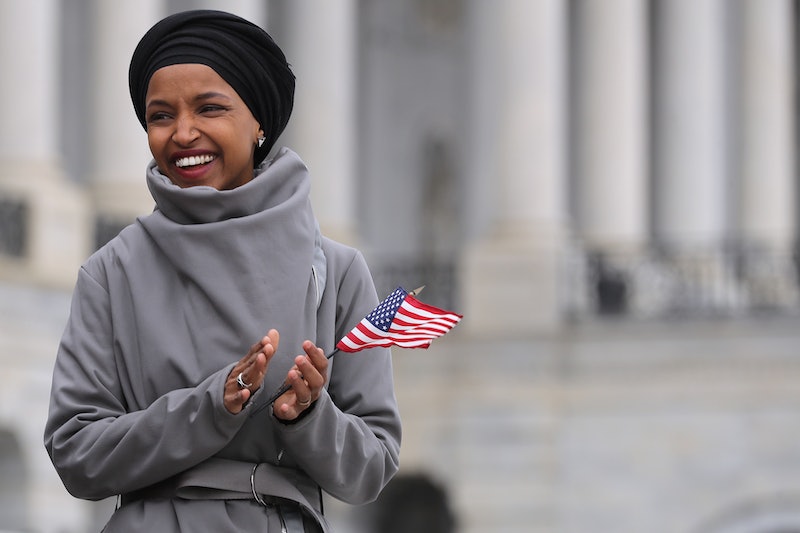 Following escalating criticism and even death threats from conservatives, Minnesota Rep. Ilhan Omar defended her love for America and pledged to fight for justice in a series of tweets on Saturday. Earlier this week, Omar faced mounting criticism from conservatives regarding a speech in which she briefly discussed 9/11, prompting many social media users to rush to her defense under the hashtag #IStandWithIlhan.

Last month, while speaking at a banquet for the Council on American-Islamic Relations (CAIR), Omar argued that organizations like CAIR have worked hard to prevent Muslims across the U.S. from losing their rights and civil liberties following the actions of a small group of people. Fox News subsequently circulated an out-of-context comment from her speech — "some people did something" — to make it seem as though Omar was trivializing the nature of 9/11.

As a result, many conservatives described Omar as "un-American," per The Daily Beast, and they threatened her with deportation and even murder. President Donald Trump went so far as to tweet a video of Omar's speech alongside footage of 9/11, Vox reported, compelling Democratic lawmakers like Alexandria Ocasio-Cortez and Ayanna Pressley to slam the president for putting Omar in danger.

On Saturday, Omar responded to this backlash on Twitter by thanking her supporters for sticking by her. She also argued that her love for the U.S. is "unwavering," and that attacks from the right would not change that.

"No one person — no matter how corrupt, inept, or vicious — can threaten my unwavering love for America," Omar tweeted. "I stand undeterred to continue fighting for equal opportunity in our pursuit of happiness for all Americans."

In her tweets, Omar also criticized the Trump administration for its regressive policies on LGBTQ rights and immigration. Just this week, a ban on transgender people serving in the military went into effect, something that Trump has demanded for nearly two years, per BuzzFeed News. Trump also aired the possibility of sending undocumented immigrants to sanctuary cities, Axios reported, though Democratic mayors subsequently made it clear that they would welcome migrants.

With policies like these, the Trump administration is threatening the "core beliefs ... of justice, of liberty, of the pursuit of happiness" upon which the U.S. was founded, Omar argued.

Omar has faced numerous attacks from Republicans ever since she first ran for Congress. She has been criticized for her condemnation of Israel's occupation of Palestine, VICE reported, and her name was allegedly on the hit list of a self-described white nationalist. Despite the attacks and death threats she has received, however, Omar has made it clear that she will not stop fighting for marginalized communities across the country.

Ocasio-Cortez remarked earlier this week that conservative attacks on her, Omar, and other progressive lawmakers are often followed by a spike in death threats. According to Axios, Capitol Police have had to train members of Ocasio-Cortez's staff to perform risk assessments of all of her visitors.