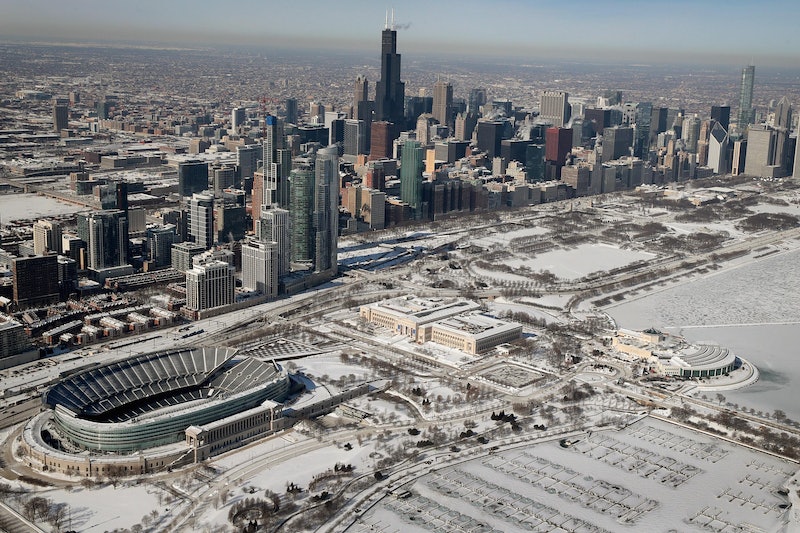 If you're headed over to Illinois by way of Missouri, you'll likely be greeted by a billboard with a rather strong message on a woman's right to reproductive autonomy. According to CBS News, this billboard touts Illinois abortion laws while appearing to swipe at Missouri’s restrictive laws on the procedure. "Welcome to Illinois," says the billboard from HopeClinic.com, "where you can get a safe, legal abortion."

The Hope Clinic is a facility in Granite City, Illinois, that is close to St. Louis, Missouri, according to the clinic's Facebook page. The clinic's executive director and physician, Erin King, told The Miami Herald that the billboard went up in mid-March and was created after Hope Clinic employees saw via social media a similar billboard on safe and legal abortion in Colorado.

In Missouri, lawmakers are pushing wide-ranging abortion restrictions through the state legislature, including a so-called "heartbeat bill," the Associated Press reported.

"Here we are in a state where patients can get access to legal, safe reproductive health care, when states right next door don't have the same access," King told The Miami Herald. "We wanted to tell patients that they are welcome here and providers will get you the help you're looking for."

The Illinois billboard is most likely referring to a specific Missouri omnibus abortion bill introduced in February. The bill, officially known as HB 126 or the "Missouri Stands for the Unborn Act," prohibits a woman from getting an abortion if a "fetal heartbeat" is detected, as mentioned before.

But doctors have long criticized the descriptor of a "fetal heartbeat" as misleading and medically inaccurate, saying that it's not a fully formed heart as we normally understand it, and thus not a credible indicator of fetal growth.

HB 126 would require medical physicians to detect a so-called "heartbeat" before they can perform an abortion, according to the official text of the legislation. This bill would require the physician to find cardiac activity by following a "good faith understanding of standard medical practice." HB 126 would also require the physician to calculate the gestational stage and inform the patient of the various details about fetal growth.

The bill outlines penalties in the case of a physician failing to conduct an inspection for a "fetal heartbeat" or brain function, according to Rewire News. In that case, the legislation says that the doctor's license would be revoked, rejected, or suspended for a period of six months. Plus, the doctor may have to pay a hefty fine of $1,000.

Ultimately, the bill states that if cardiac activity is detected, the physician would have to inform the patient that the abortion cannot be performed under Missouri law. On top of that, if the Supreme Court of the United States overturns Roe v. Wade, this bill would trigger a statewide ban on abortion — if it is signed into law.

The implications of HB 126 have enraged people who support women's right to reproductive choice and autonomy. Missouri Democratic Rep. Cora Faith Walker told The Associated Press that she was "terrified" the legislation and added, "There’s been no combination of such draconian laws and measures." With the Illinois billboard up, Missouri supporters of safe and legal abortion practices are bound to find some relief and assurance in their next door neighbor.