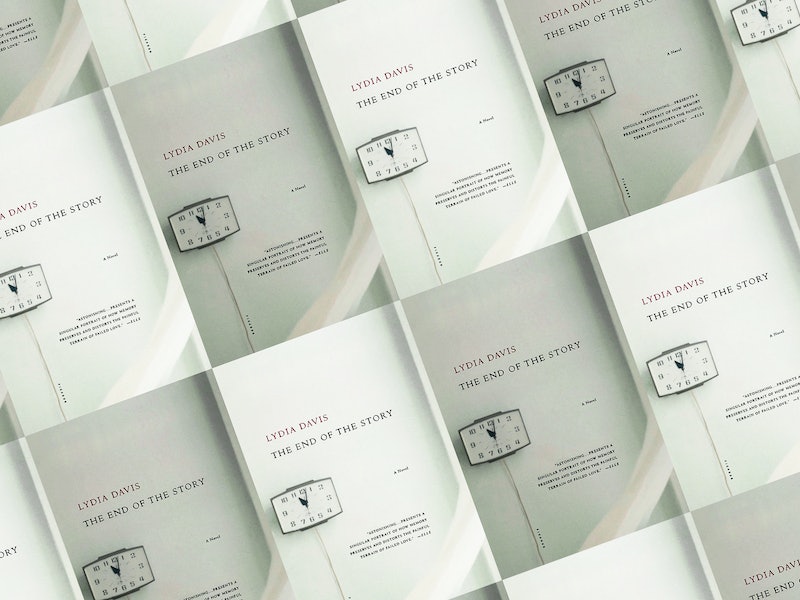 Bustle's I'm So Jealous series is dedicated to the books, TV shows, movies, podcasts, and more that super fans are so jealous someone else gets to experience for the first time. In this installment, Clare Schneider writes about The End of the Story by Lydia Davis.

In search of solace after a particularly painful breakup, I went looking for stories about heartbreak. I found Lydia Davis’s only novel, The End of The Story, in the stacks of my college library and turned to it to satiate my desire to analyze, remember, and wallow.

In the novel, memory is finicky, facts are malleable, and narrative is fluid. "Beginning," "middle," and "end" are not fixed parts of the story, but objects that can be moved around. "I see that I am shifting the truth around a little, at certain points accidentally, but at others deliberately. I am rearranging what actually happened...” says the nameless protagonist. The narrator, attempting to trace the arc of a failed relationship, tries to observe the past in ways she was incapable of in the moment. She organizes her memories into a deconstructed novel — a novel about the process of writing the story you are reading.

'The End of the Story' by Lydia Davis
Amazon

Still lost in the soup of heartbreak, I found Davis’ writing about the ugliness and dreaminess of love to be both painfully and relievingly familiar. This book reflected so wholly my own experience of being in a relationship and of having one end — the obsessive parts, the beautiful parts, the way that endings taint every memory — that I decided to send a copy of it to my ex, in the mail, unprompted, with no explanation. I thought it would be the best way to communicate how I felt about our tumultuous end, and no, this is not something I recommend others do. But, it was cathartic. I was able to hide behind the book and passively share my feelings. I hoped he would recognize the protagonist’s longing and selfishness as my own. His response was lackluster, but people close to me still lovingly make fun of me for sending him the book.

Reading The End of The Story was both cathartic and uncomfortable — I felt jealous of the protagonist’s ability to look back, and I recognized myself in her ambivalence. “I was not the same with him as I was with other people,” she thinks. “I tried not to be as determined, as busy, as haste, as I was alone with friends. I tried to be gentle and quiet, but it was hard, and it confused me. It also exhausted me.” The book is full of lines like this — moments where the narrator looks at the relationship with the clarity and introspection that only comes with the passing of time. This is not a story about a perfect relationship in which the narrator can be herself wholly and does not see flaws in herself or her partner. She changes for him. She needs breaks from him. She is tired of being around him. She is tired of herself from being around him.

Nothing really happens in The End of The Story. The narrator frets about where in the novel she should place certain memories, how important an “end” is, and if she remembers any of the “facts” correctly anyways. She creates her own narrative, her own relationship, her own ending: “If I now think I shouldn’t have had a certain feeling so early in the relationship, I move it to a later point in time. If I think I shouldn’t have had the feeling at all, I take it out.”

Davis points out that to write a story is to exert control, and possess what we have lost. “I was forcing him to give me something after all...I didn’t have him, but I had this writing, and he couldn't take it away from me.” And this is the crux of the novel — it’s not merely a story about heartbreak, it’s about a woman using art to control and edit her past.

Heartbreak is not redemptive in The End of The Story. But it is greatly satisfying, because you are left with the product of her loss: the book itself. Which you can choose to send to your ex or not.

If you’re picking up The End of The Story for the first time: Davis’ descriptions of memories and fascination with how endings impact them might leave you questioning what “facts” are, or if “endings” exist. Enjoy.

If you love it and want more of the same: Try reading her short stories, "Story" and "The Letter." You’ll recognize bits of the novel in both.

And if this book converts you into a member of the Cult of Lydia Davis: You’re in luck—her collected short stories rings in at a whopping 733 pages.

This article was originally published on March 22, 2019