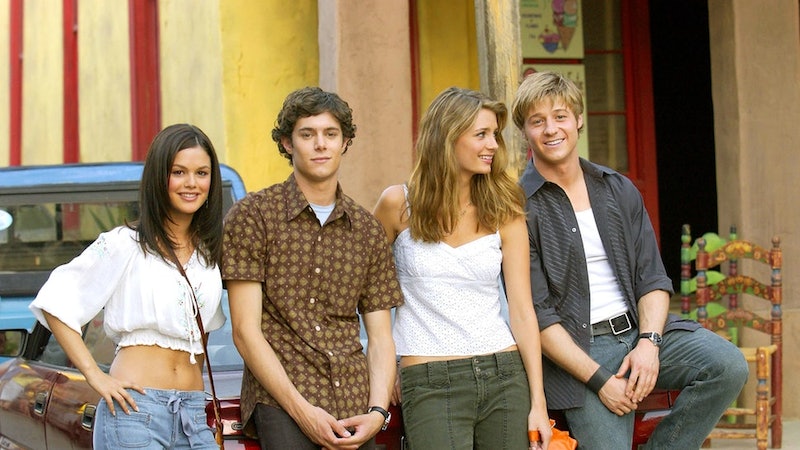 Bustle's I'm So Jealous series is dedicated to the books, TV shows, movies, podcasts, and more that super fans are so jealous someone else gets to experience for the first time. In this installment, Lindsay Denninger writes about everyone's favorite teen soap, The O.C.

In the late 1990s, Dawson's Creek reinvented the teenage coming-of-age show. It was mostly a drama, with very smart teens and soapy storylines. Other series followed, all with different styles, premises, and heartthrobs, but I never paid much attention to them. I didn't not watch them, but Roswell and One Tree Hill and the others never warranted as much affection in my eyes as did The O.C. I was barely a teen myself when it premiered in 2004, and to me, the show felt different: It got me more than any "teen" show had before.

It helped that the music was absolutely rad, launching bands like The Killers and Death Cab For Cutie into the mainstream. I still listen to the soundtracks put out by the show because they are perfect microcosms of teenage life — the yearning, the aggression, the confusion, the sadness, the hunger. Every song and every episode of The O.C. feels relatable for a teen, with just enough humor in there to push it away from after school special territory.

If there's one thing millennials don't like, it's being shilled to, and The O.C. never did that.

The characters on The O.C. also were given the gift of great character development. Mad Men, this wasn't, but to watch Luke start out as a water polo-playing jock and end up a sensitive character is absolutely delightful and true to the changes that teens and college kids undergo in those formative years. We're all just trying to figure it out, right? The O.C. gave its characters — even its villains like Luke and Julie — room to grow and change in a way that didn't leave them as the stereotypes you usually see on teenage television.

The O.C. always knew that it was a soap with an identity. It was Southern California, and it was these teens, and it allowed them to coast along and find their footing in a world that was swiftly changing against them. And in the four years I watched, I, too, found my own footing alongside them.

It doesn't have to be a time commitment. Focus on the first season, skim through the second and third, and tune in for the fourth. Showrunner Josh Schwartz always tries to cram as much plot as possible into this shows and things can get messy, but the first and last really get the stories right.

If you love it and want more of the same genre: Lucky for you, the mid-to-late 2000s were awash with angsty teen dramas for a new generation. Try One Tree Hill for a traditional teen soap. Glee works if you like music injected into everything, and 90210 is great if you like reboots. Oh, and for a look into how rich teens act on the other side of the country, stream Schwartz's seminal Gossip Girl series.

And if you need to know where the actors are today: Virtually the entire cast of The O.C. has been working on and off since the show wrapped. For Ben McKenzie, try Southland or Gotham. For a dose of Summer (aka Rachel Bilson), the sweet Hart of Dixie should do it. Mischa Barton fans can tune into the new season of The Hills (seriously), and Peter Gallagher has appeared on New Girl, The Gifted, Law & Order: Special Victims Unit.

Welcome to the O.C. — I hope you enjoy the ride as much as I do.