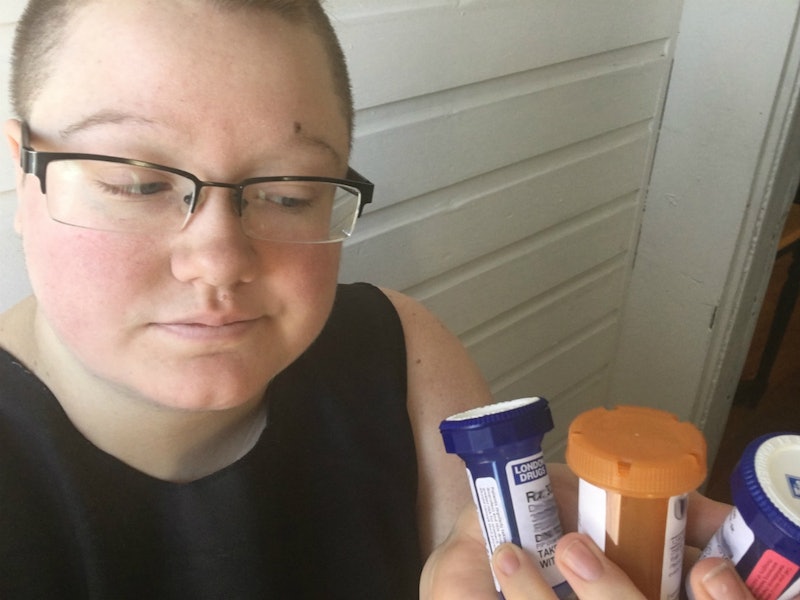 On Wednesday night, Senate Republicans ate pizza while they voted to take away my health coverage. I'm queer, transgender, have a diagnosed anxiety disorder, and I rely on my parents' coverage in case of emergencies. But if the GOP repeals Obamacare's healthcare provisions, I and the other 20 million Americans who are covered will be on track to lose our much-needed coverage as soon as the end of February.

I'm an American, born and raised in swing state Ohio, but I've been visiting my spouse in Canada for the past 12 months. My anxiety disorder comes with symptoms that conveniently include intense paranoia about health problems, and the idea of losing my coverage exacerbates my anxiety to a debilitating degree.

According to the Canadian government, it will be another 12 months before I'll know whether or not I'm allowed to stay here permanently on a spousal visa. By the time I hear the verdict, I'll be 25 years old. If the GOP has its way, that will be my first birthday in nearly 20 years without the reassuring safety net of my schoolteacher stepfather's health insurance.

There's more. Not only did Republicans vote to gut the provision allowing people under 26 to stay on parents' health insurance, but they voted to reinstate insurance companies' ability to deny coverage to people with pre-existing conditions. According to TermLife2Go, a company which helps people navigate the health insurance industry and find suitable plans, "pre-existing conditions" covers everything from anxiety to diabetes to seizures to hemophilia.

What if I have an emergency? What if my dysphoria becomes so bad I can't make it without hormones?

That means if the budget passes the House and my parents' health insurance follows the GOP's lead and cuts me loose, I'll be among the one-quarter of Americans with a disqualifying condition. And while diagnosed anxiety may not knock me out of the running for coverage from some major insurance companies, being transgender sure as hell will. In order to begin hormones or be considered for gender affirmation surgeries, a person has to be diagnosed with "gender identity disorder" — which is classified as, you got it, a pre-existing condition.

Accessing basic healthcare abroad is already tricky, even with the Affordable Care Act's improvements to the system. I'm no longer able to take my anxiety medication because my American insurance company refused to cover it when I left for Canada, and I can't afford to pay out of pocket for Canadian meds. If I were to have a true emergency while here in Saskatchewan, I would have to pay for my care out of pocket, then petition my company to cover the costs later. If, for example, I needed an ambulance, the ride would cost me at least $245 — not counting the price of any medical supplies used on the journey.

Like many people my age, I have nearly $600 in student loan payments per month and little access to credit, so if I re-tear my surgically replaced ACL, or need emergency room intervention to ease one of my occasional multi-week migraines, or need to go on any sort of medication, I will be unable to pay for it out of pocket.

Despite all of that, and despite living with intense anxiety bubbling in the back of my brain 24-7, I know I'm lucky. If my spousal visa is approved next year, I will immediately be listed on my spouse's Canadian health coverage plan. Their coverage includes free drugs, free doctors' visits — actually, free everything, so long as we're in Saskatchewan. Their recent diagnostic MRIs were both covered by their plan without any fuss, while in my last year before leaving the U.S., I was stuck with the bill for a CAT scan (which was looking for migraine-causing brain tumors) after my insurance deemed it "unnecessary," despite ER doctors requiring I undergo it before receiving any migraine treatment.

But that's nothing compared to the people who are facing the prospect of having no health insurance for years to come. The people who literally rely on Obamacare to keep them alive.

My point is, even with Obamacare's protections in place, insurance companies still found ways to screw us over by doing things like jacking up premiums as much as 22 percent.

Considering what they might do now that Republicans are dismantling the ACA and removing many of our protections is terrifying. What's worse is the fact that the GOP has not yet laid out details of the replacement plan — if there is one.

At his press conference at Trump Tower on Jan. 11, Donald Trump so eloquently said, "The easiest thing would be to let [Obamacare] implode in 2017, and believe me, we'd get pretty much whatever we wanted, but it'd take a long time. We are going to be submitting, as soon as our secretary is approved, almost simultaneously, shortly thereafter, a plan. It will be repeal and replace. It will be essentially simultaneously. It will be various segments, you understand, but will most likely be on the same day or the same week, but probably the same day, could be the same hour."

Trump did not reveal any details of Schrödinger's plan, and the lack of concrete information has reportedly not pleased some Republicans.

If the GOP moves forward with repealing the ACA, parts of a new plan are supposed to be in place by the end of February. If they remove the provision allowing kids to stay on their parents' plans, I will go about one year without any kind of health coverage before (hopefully) completing my immigration.

But that's nothing compared to the people who are facing the prospect of having no health insurance for years to come. The people who literally rely on Obamacare to keep them alive. I have friends who take medication to keep them alive, and who are only able to afford those meds through Obamacare. My father, who has Type 2 diabetes, currently takes the least-expensive medication possible, and without insurance would have to pay nearly $200 for one month's worth of blood sugar test strips.

Simply put: People will die without Obamacare, and their blood will be on the GOP's hands.

Right now, my personal worries are what ifs. What if I have an emergency? What if my dysphoria becomes so bad I can't make it without hormones? But other people are looking at a future of severe financial struggle, of discrimination from the insurance companies whose help they will desperately need, and at possibly having no coverage at all.

The House votes Jan. 13. If you're an American, call your representatives and tell them what you think.