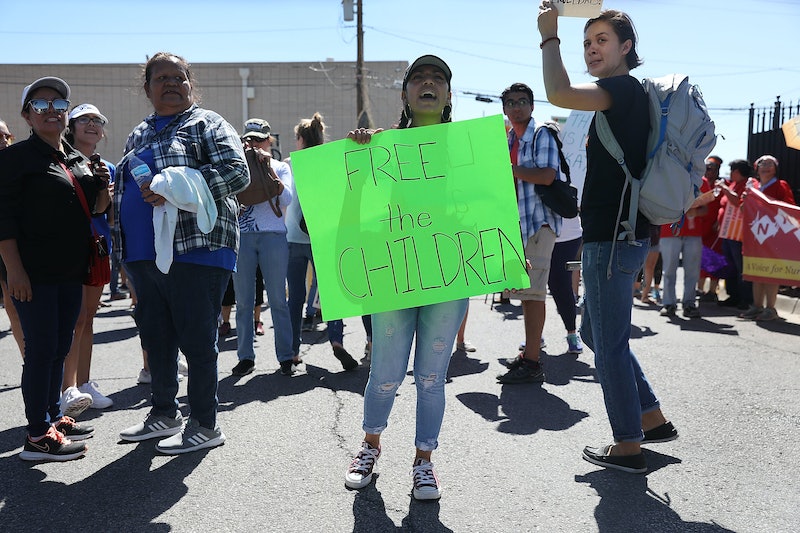 The news that the Trump administration had separated immigrant children from their families at the border and was holding them in shelters captured the nation's attention early in the summer when the scope of the problem came into full view. However, the problem didn't end when the news coverage moved on, and now reports have emerged that the Department of Health and Human Services (HHS) moved immigrant children to a tent city in southern Texas.

The children now occupying the tent city in Tornillo, Texas — which isn't the only one of its kind — aren't just those whom the Trump administration separated from their parents at the border, though, according to The New York Times. The population of immigrant children of whom HHS retains custody has reportedly shot up since the summer of 2017 from 2,400 to 12,800. HHS' facilities are stretched to the limit — which is the reason the children were moved to a new tent city. The one in Tornillo can hold up to 3,800 children in tents separated by gender that sleep 20 kids each, The Times wrote.

The administration has been moving the children in the middle of the night, which is reportedly a measure designed to stop them from trying to escape.

In their new temporary home in Tornillo, the children are receiving the regular schooling and access to legal help that they got at their previous foster homes, The Times reported. HHS means for this only to be a temporary situation, a spokesperson said.

“It is common to use influx shelters as done on military bases in the past, and the intent is to use these temporary facilities only as long as needed,” HHS spokesperson Evelyn Stauffer said. She then went on to call the thousands of children in custody "a symptom of the larger problem, namely a broken immigration system."

"That is why H.H.S. joins the president in calling on Congress to reform this broken system," she told The Times.

While the Tornillo tent city has recently seen an influx of new residents, it isn't new. It and others first went up in early June, according to USA Today, and immigrant advocates were quick to criticize the policy of housing children in situations like that.

“A tent city is not a place for children to be,” said Texas state Rep. César Blanco. “That’s counter to the values not just of border communities but America in general.”

The town of Tornillo, according to Reuters, has a largely hispanic population, and the grand majority of inhabitants don't support housing immigrant children in facilities like that.

“I wish that Tornillo as a town was not going to be remembered throughout the nation as the place where there are tents for children,” said Tornillo Independent School District Rosy Vega-Barrio, speaking with Reuters in June.

The Tornillo facility, which is almost directly adjacent to the southern border, currently houses a population of mostly teens. Conditions in the tent city are "good," according to a Texas Republican Rep. Will Hurd, who visited in June and spoke to Texas Monthly about it — but he still told the publication that he saw a major problem with it.

“If, in order to address our broken immigration system, we’re using children as a deterrent, then we have a problem,” Hurd told Texas Monthly — referring to the administration's family separation policy.