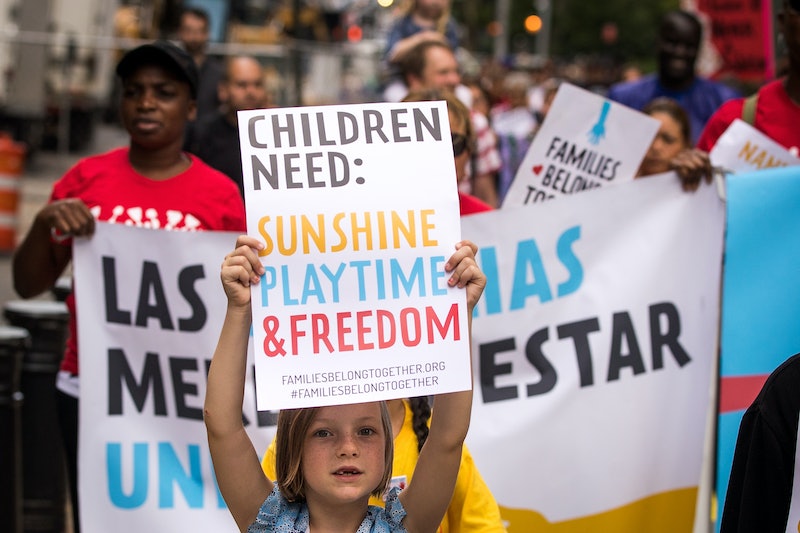 A 17-year-old girl from Guatemala reportedly entered the United States with her premature baby — who was just one month old — and was put in detention by Customs and Border Patrol (CBP) instead of being taken to a neonatal hospital, a child immigrant advocate told the Associated Press. The immigrant teen mom and premature baby in CBP care were held near McAllen, Texas, but have reportedly been transferred to a private facility on Thursday. Their identities have not been released.

Hope Frye, an advocate who visits facilities to make sure they are complying with the Flores Settlement — which says unaccompanied children under 18 must be transferred from CBP custody to the Office of Refugee Resettlement (ORR) within 72 hours — came upon the mom and baby on Tuesday. At that point, they had reportedly been in custody for seven days, since June 4.

Frye told the AP that CBP hadn't even provided clothes for the baby after forcing the mom to throw away her backpack which had clothes in it. CBP declined to comment; the Department of Health and Human Services' Administration for Children and Families, which overseees the ORR, says in a statement that it doesn't discuss specific cases.

"The Office of Refugee Resettlement (ORR) in HHS’ Administration for Children and Families has policies in place to maintain the privacy, security and well-being unaccompanied alien children (UAC) and we do not identify or discuss specific UAC cases," the agency said in a statement. "HHS is a child welfare agency, not a law enforcement agency. We play no role in the apprehension or initial detention of unaccompanied alien children (UAC) prior to their referral to HHS custody and HHS is not a party to the child’s immigration proceedings."

"You look at this baby and there is no question that this baby should be in a tube with a heart monitor," Frye told the AP. The girl was reportedly sent to the hospital on Wednesday but was later released. The baby was not hospitalized, according to the news agency. Starting on Saturday, doctors are to be visiting the facility to do health checks on those being held there.

The 17-year-old mom was in pain, according to the AP. The news agency reported that she had had an emergency cesarean section in May in Mexico and then was carried across the Rio Grande by fellow immigrants because she was not able to make it on her own. She also needed help getting into a CBP car when she was taken into custody. At the facility, Frye told the AP that the mom was in a wheelchair.

"No child should ever go into Border Patrol custody — they are not equipped to handle it. It was never their mission. Congress needs to do something," Frye told BuzzFeed News. "I don’t know why it took so long. I don’t know. They would still be detained if we hadn’t come across her in the Flores interview. No question in my mind." BuzzFeed News reported that Sen. Jeff Merkley of Oregon called the Department of Homeland Security about the case.

Frye said that it is difficult to observe children in such conditions. "This collapsed me," she told BuzzFeed News. "I can’t cry when I’m in visits but I have had to turn around on several occasions and hold myself back. It breaks my heart. It makes me physically sick. It is really horrifying."

The ACLU of Texas has criticized the detention conditions, saying that alternatives exist like monitored release. "No human being should be held in the overcrowded and deplorable conditions that plague CBP holding facilities," Tommy Buser-Clancy, staff attorney for the ACLU of Texas, said in a statement obtained by The Guardian. "It is alarming that CBP would consider this environment an appropriate place to house any newborn infant, let alone those who may need medical care."

At least five children have died in CBP custody since late 2018.

More like this
8 Charities To Donate To During Black History Month
By Alexis Morillo
24 History-Making Black Women You Probably Didn't Learn About In School
By Ayana Lage and JR Thorpe
25 Inspiring Quotes From Black Women To Celebrate Black History Month
By Kyli Rodriguez-Cayro and JR Thorpe
6 Organizations Fighting Police Brutality That You Can Support Right Now
By Syeda Khaula Saad and JR Thorpe
Get Even More From Bustle — Sign Up For The Newsletter
From hair trends to relationship advice, our daily newsletter has everything you need to sound like a person who’s on TikTok, even if you aren’t.