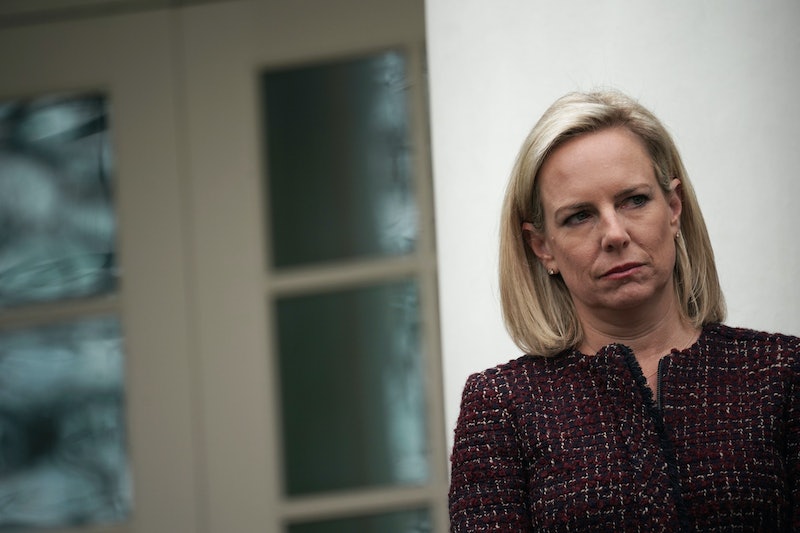 Homeland Security Secretary Kirstjen Nielsen's departure is just the latest example — the Trump administration has been a revolving door for staff, with turnover at the White House, federal agencies, and even in the Cabinet. Now, though, it might be a bit harder for these officials to land their next gig. Restore Public Trust and other immigration groups don't want people to hire Trump administration officials — especially those that have been involved with the family separation immigration policy.

The coalition of civil rights and immigration advocacy groups joined together to write an open letter calling on CEOs not to let administration officials "seek refuge in your boardrooms or corner offices." Bloomberg reported that the letter will be sent to all Fortune 500 CEOs.

"We call on you to make it clear that you will not hire for employment, contract for consulting, or seat on your boards, anyone involved in the development or implementation of the Trump administration’s family separation immigration policy," the open letter reads.

The letter was dated Saturday, one year since the family separations policy was announced by former Attorney General Jeff Sessions. It includes a list of 30 high-ranking current and former administration officials that the group blames for the policy, including Nielsen.

The groups also took out a full-page advertisement in The New York Times reading, "Attention corporate America: don't let hate into your boardroom." The effort is being organized by Restore Public Trust, together with some 40 groups that have signed on. Among them are the National Immigration Law Center, the Center for Popular Democracy, and the Southern Poverty Law Center.

The letter thanks corporate America for being outspoken about the family separation immigration policy, but it notes that the CEOs' "words are meaningless unless they are backed up with resolute action." In addition to asking that these officials not be hired, the groups ask that they not be contracted for consulting or seated on boards.

Plus, they ask corporate America to cut ties with their lobbying shops, consulting firms as well as any think tanks, political committees, and candidates they fund who might hire the officials.

Given Nielsen's departure, her next move will likely be watched closely. On Twitter, people retweeting the campaign have noted that any company who hires her should be boycotted. Restore Public Trust has also commented on the secretary's resignation.

"Her resignation represents a dramatic moral test for those at the helm of our country's most influential institutions," Restore Public Trust spokesperson Karl Frisch said in a statement. "It is the moral responsibility of Fortune 500 CEOs, university presidents, and others to send a clear signal that this administration's conduct has crossed a line and refuse to associate with her — or her colleagues."

In addition to the letter and newspaper ad, the groups launched a website, TrumpAdminSeparation.org, where you can learn more about the role that certain administration officials had. Every person they suggest not be hired has a section complete with quotes from interviews and speeches about the policy.

If you agree that these officials shouldn't be hired, you can even sign a petition that adds your name to the list of people asking corporate America not to hire Trump administration higher-ups who supported the family separation immigration policy.