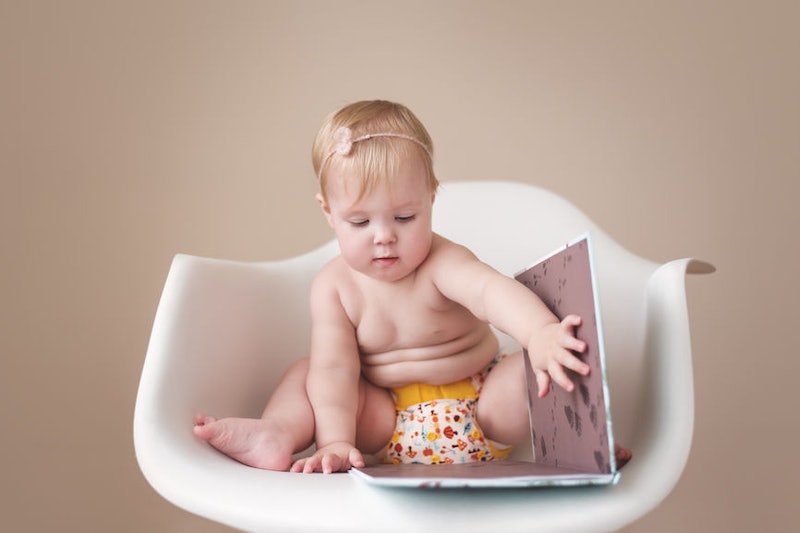 From my earliest memories, there hasn’t been a single moment in my life when I haven’t been starting, finishing, or in the middle of a book. From The Rainbow Fish (the very first book I remember reading) through The Boxcar Children and The Magic Treehouse series, The Baby-Sitters Club and Anne of Green Gables, the classic novels on my 11th grade required reading list and the texts that made up my graduate school syllabi, to the books that are currently sitting on my bedside table (The Fourth Trimester by Kimberly Ann Johnson and The Incendiaries by R. O. Kwon) I have always, always been reading something. As I was growing up, my mother was the same way — her Nora Roberts sitting next to my stack of Nancy Drews on the coffee table, her Anne Lamott next to my Hunter S. Thompson.

On the first day of my own daughter’s life — in a post-C-section, morphine-facilitated haze and disoriented from nearly three days of birth-giving — I pulled a multilingual baby book called Hello, World! out of her diaper bag and read it to her. Never mind that she hadn’t yet even mastered the skill of keeping her eyes open for more than a few moments at a time. I was planting the book-lover seeds early.

But more than laying the groundwork for my desire to raise a tiny human just as intensely in love with literature as I am, reading to my daughter in those early hours of her life felt like an act of survival. My pregnancy had been beautiful but medically complicated. I was pressured into being induced four weeks before I, or my little one, were ready. The unmedicated and empowered birth I fought hard for ended in major (no matter how routine) abdominal surgery. Then, due to diagnoses that varied with every nurse shift-change, I was unable to breastfeed this child whose life’s sustenance depended on my ability to do the exact thing that I couldn't. Reading was, in that moment, a last-ditch effort do just one thing right; to offer this daughter — whom I could not physically feed from me — the sustenance I had fed on through nearly all of my own life: literature.

"But more than laying the groundwork for my desire to raise a tiny human just as intensely in love with literature as I am, reading to my daughter in those early hours of her life felt like an act of survival."

I had put more thought into selecting Hello, World! as my daughter's first book than the obviousness of its title might suggest, having had ample time to think about it. It had taken me longer to get pregnant than I expected. Surprised when the months and negative pregnancy tests began to pile up, I filled my anticipated child’s bookshelves; compiling a baby library before there was a baby to choose books for.

I filled short, primary-colored bookshelves with the favorites of my own childhood, alongside the increasingly more diverse, gender neutral, STEM-focused children’s books that are published today. I imagined the child who might read them: inquisitive and serious, curious and wild, wide-eyed and observant, just as I had been. I filled the holes that had been left in my own — however rich — bookish childhood: seeking out books with characters who looked and spoke differently than I do, who live in places I might never be, who face challenges I’ll never be exposed to.

"I imagined the child who might read them: inquisitive and serious, curious and wild, wide-eyed and observant, just as I had been."

When I finally did get pregnant, with a baby girl, I shelved Elena Favilli and Francesca Cavallo’s Goodnight Stories For Rebel Girls alongside Margaret Wise Brown’s Goodnight Moon, Jennifer Palmieri’s Dear Madam President: An Open Letter to the Women Who Will Run the World alongside Rod Campbell’s Dear Zoo, Chelsea Clinton’s She Persisted alongside Russell Hoban’s Bread and Jam for Frances (also about the value of persistence.) I want my little one to have the opportunity both lose and find herself in story, to feed off of words and the rhythm of language — just as I always have. I stocked her shelves with the idea of instilling in her both a sense of fantasy and one of justice, an understanding of magic as well as social responsibility, an awareness of the particular place she occupies in the world alongside those of others who are both more and less privileged than she will be.

Above all else, I want her to learn how to answer her own questions, how to embark upon her own adventures, how to feed her own soul, when I am unable to do these things for her.

At the same time, I am scared for her (and, likely, for me.)

"I want my little one to have the opportunity both lose and find herself in story, to feed off of words and the rhythm of language — just as I always have."

As a child myself, no book I discovered was off-limits; my mother never censored my reading material, preferring to set me loose in the library or bookstore, free to follow my own curiosities and judgements. As a result, I discovered writers like Joan Didion, Hunter S. Thompson, Sylvia Plath, and Tom Wolfe long before I might otherwise have. At the same time, I also devoured countless novels about teen love triangles, wherein the girl is always slightly damaged by loss or illness, and the adolescent fight for her attention is what saves her. Even Gilbert Blythe demonstrated his love for Anne Shirley by pulling her hair. My obsession with these fictional plot lines led me to seek them out in my real teenage life as well; spending as much time chasing boys as I did chasing books — which is why, to this day, I still cannot divide fractions or tell you a single thing about the periodic table of elements.

At 16-years-old I discovered books like Svetlana Alexievich's Zinky Boys, Luís Alberto Urrea's The Devil's Highway, Philip Gourevitch’s We Wish to Inform You That Tomorrow We Will Be Killed with Our Families — and the world beyond my direct, even imagined, experience opened up before me. The fact that such injustices were not only happening outside the pages of my World History class textbooks, but were also happening in my lifetime, put my own small life into clearer focus.

At 18-years-old I discovered the writing of Paulo Freire, Dorothy Day, Abbie Hoffman; ideologically severing me from my upbringing and, for a time, my mother as well — that person who taught me to love books and seek out knowledge in the first place.

In my twenties, reading Andrea Dworkin, bell hooks, Betty Friedan, Gloria Steinem, and Jessica Valenti, I butted ideologies with my mother again — discovering an uncomfortable and often inconvenient anger in myself that I hadn’t known I was allowed to have, and one that she still struggles to understand.

"The fact that such injustices were not only happening outside the pages of my World History class textbooks, but were also happening in my lifetime, put my own small life into clearer focus."

Now — or at least, at some point in the not-so-distant future — I would be extending the same, uncensored freedom to read to my own daughter. What would she find there? Where would it lead her? At what point would she discover something that would take her life in a sharp left (or right) turn away from mine?

Until that moment in the hospital, when I tucked my tiny, swaddled stranger into the crook of one arm and read Hello, World! aloud, I don't think I had fully grasped the power that literature has held in my life. It's one thing to entrust your own questions, adventures, longings, and nurturance to books — it's quite another to imagine your daughter finding her way in the world (and, perhaps, away from you) through literature, as well. At the same time, it is the thing, if nothing else, that I have to offer this new being: a love of words, a thirst for stories, a curiosity about nearly anything that can be found between the pages of a book, a compulsive desire to smell old paper, and shelves full of mindfully curated children’s books that will hopefully serve to light the path she will ultimately have to forge on her own — or, rather, in the company of the authors she finds there.