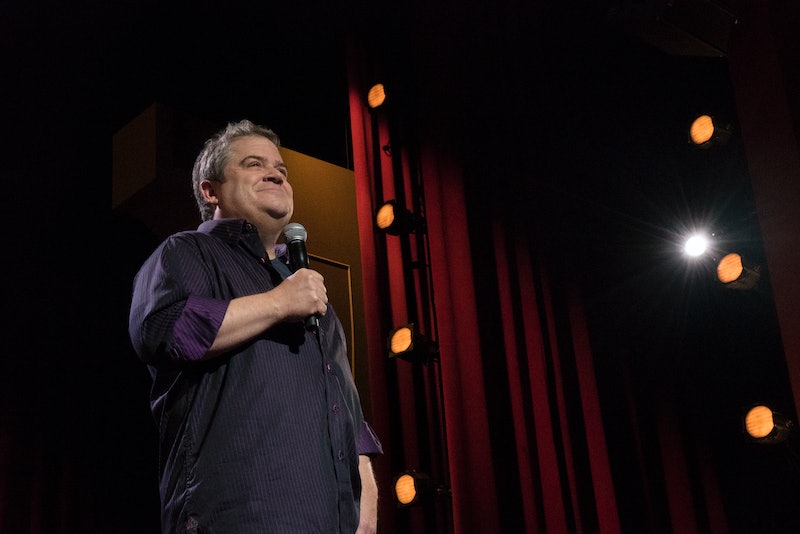 In his new special, the Netflix release Annihilation, Patton Oswalt wades through unimaginable grief with a watchful audience in front of him. Fans of the stand-up comic won't be surprised at the tone the show, which hit the streaming service on Oct. 17, strikes about halfway through. Most will have been expecting it. Oswalt's wife, true crime writer Michelle McNamara, died suddenly and unexpectedly last year, and Patton Oswalt: Annihilation serves as a makeshift — and worthy — memorial to her.

Oswalt gets some light-hearted laughs in with his audience before slamming down on an unhappy reality. The first 30 minutes or so of the special bounce between exasperated political commentary and silly audience interactions, but it becomes clear he is headed for something somber.

"I'm just killing time," Oswalt says after teasing the front row of the crowd in his characteristically good-natured way. "This next section is very hard for me to get into." The comedian has always been relatively open about McNamara's death and how it's affected him, but speaking about it in an interview or penning a Facebook post about it is different than standing onstage in a packed theater and bearing your soul to hundreds of strangers. Oswalt pulls it off, though, simultaneously telling his own unique story while also putting words to the feelings many people experience after a damaging loss. He chides people who wish him well on his "healing journey," saying, "when it's 4 a.m. and I'm in the backyard crying and looking at the sky in my underwear," it doesn't feel like he's embarking on a heroic, healing journey.

He also uses some of McNamara's own words to prove his points — she hated the phrase "everything happens for a reason," he says. "It's all chaos, it's all random, and it's horrifying," McNamara would say, according to Oswalt. "And if you want to try and reduce the horror, and reduce the chaos, be kind. That's all you can do."

The discussion of his late wife is moving and heartbreaking, but not without laughter — not by a long shot. He talks about how things that would normally be his escape from reality, like comic books, failed him — why are superheroes ravaged by loss always doing martial arts and visiting their loved ones' graves during late night rainstorms?

"We're open nine hours a day," Oswalt says, mimicking a cemetery security guard. "I don't know why he's gotta come at night and stand there with that Offspring song playing."

Oswalt's daughter, Alice, also plays a big part in his story. McNamara's death left him a single dad for a time. (Oswalt is currently engaged to actor Meredith Salenger.) He recounts taking Alice to school for the first time after her mother died, saying he must've looked like a drug addict who had just found a random kid and was using her to score free food at the cafeteria. Even though he's reliving these moments by peppering in absurd jokes, Oswalt remains devastatingly genuine throughout. You see the pain, frustration and sadness flicker across his face during some of the more difficult moments of the set, but you never see defeat.

Studies exist to support the idea that laughter and comedy can help one deal with personal struggles. The Mayo Clinic says laughter produces natural painkillers, helps with coping with depression and anxiety, and makes it easier to connect with others in difficult situations. And other comedians have spoken about similarly painful experiences in their own sets. "Hopping on a comedy stage and sharing stories with friends and strangers buoyed my confidence and gave me a much-needed emotional release," comedic storyteller Kambri Crews wrote in The Huffington Post. "There is a reason comedians gravitate to the stage and why audiences continue to support live comedy and storytelling shows: Because life is tough, we all just want to laugh more."

Oswalt himself said that Annihilation is meant to be somewhat of a healing experience, and he even told Vanity Fair that he wouldn't be performing the material again following the filming of the special. "It would feel weird going on to make some money off of this stuff when it was just meant to be pure catharsis," he said. "I’ll just write another hour."

While Annihilation can be seen as many things — a therapeutic exercise for a grieving widower or a single dad's take on helping his daughter through loss — what it mostly is... is funny. Oswalt is a time-tested comedic figure who never fails to get a laugh, regardless of if he's talking about the deep pains of the human experience or a ridiculous, drunken fight he witnessed one night on the Sunset Strip. If he wanted to memorialize his wife in any way, I think he succeeded, because he embodies the very thing she always said — it's chaos. Be kind.