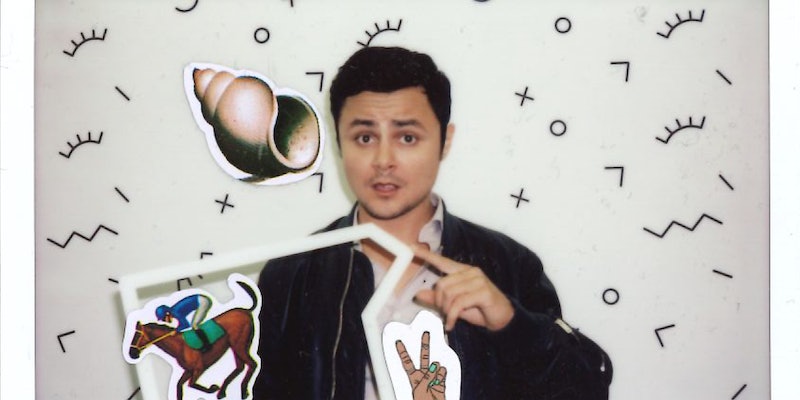 When celebrities hang out with Bustle editors, we want to give them the chance to leave their mark. Literally. So we hand them a pen, a piece of paper, a few questions, and ask them to get creative. The rest is up to them. This time, Broad City star Arturo Castro is leaving his mark in the Bustle Booth.

Arturo Castro may be fairly new to Hollywood, but the 31-year-old actor is making his mark on the industry one role at a time. Since breaking into the acting game, he's landed small roles that range from a character named Dishwasher Juan on CBS's The Good Wife to Dr. Armando on Amy Schumer's Snatched. But, as of 2014, he's probably been known to most people for showing off his comedic chops alongside Abbi Jacobson and Ilana Glazer as the latter character's drug-dealing roommate Jaime on Broad City.

And don't think that his acting has any limitations, because when he's not being a funny guy on the Comedy Central hit, you can find him playing a role on the total opposite end of the spectrum: the ultimate villain on the third season of Netflix's original series Narcos.

The Guatemalan-born actor clearly has no issues challenging himself and figuring out how to switch up his performance, and his newest project sees him creating his own pilot for Comedy Central outside of Broad City. The show called Alternatino is based on a web series he wrote on his own and it follows Castro as he "attempts to navigate life as a modern Latino man – whatever that means."

We'll have to wait a little while to get an answer to the "whatever that means," part of his new show's description, but in the mean time, Castro stepped into the Bustle Booth to teach us a tad bit more about the man behind the extensive catalog of characters.

Castro may be starring in two completely different television series, but those last three emojis can probably be applied to the plot lines of either of them, to be honest. As hilarious as Broad City is, there's really never any way to guess what sorts of crazy situations the whole gang is ever set to end up in, but a lot of it leans more towards involving sex and/or drugs — hence the eggplant and dizzy face emojis. Then again, anyone watching Narcos should already know by now that lots and lots of talk of drugs is to be expected on a show that's about a Colombian drug cartel.

If you haven't been watching Narcos, it's worth noting that tuning into the show as it has just entered its third season will leave you with total Game of Thrones vibes. Why? Well, the new season picks up after the fall of Pablo Escobar and focuses on the rise of the Cali Cartel. Arturo Castro plays David Rodríguez, the son of one of the cartel leaders, and his character is so sadistic and easy to hate that he's actually been compared to Joffrey Baratheon, arguably the most memorable villain to appear on GoT.

"He’s kind of a psychopath," Castro told Vanity Fair when speaking of his character, adding that the Joffrey comparisons are "very flattering, because I loved that character."

"I mean I don’t love who he is — he’s a very hateable person. But it’s such a joy to play somebody sadistic, to be honest. That might come off wrong, but it’s like you get the best, most f*cked-up lines. They’re so fun to say and perform."

Obviously, Castro isn't a drug-dealing psychopath in real life. Judging the questions about Joey and Rachel that are still looming in his mind even years after Friends came to an end, he's a lot more like you than you probably would have thought.

More like this
On 'The Handmaid’s Tale,' Christine Ko Fights Back
By Gretchen Smail
Ismael Cruz Córdova Loves His Elf Ears
By Morgan Leigh Davies
What’s New On Netflix: Ana De Armas’ 'Blonde' & A Nick Kroll Special
By Arya Roshanian
'Elite' Season 6 Is Arriving Sooner Than You Think
By Gretchen Smail and Grace Wehniainen
Get Even More From Bustle — Sign Up For The Newsletter