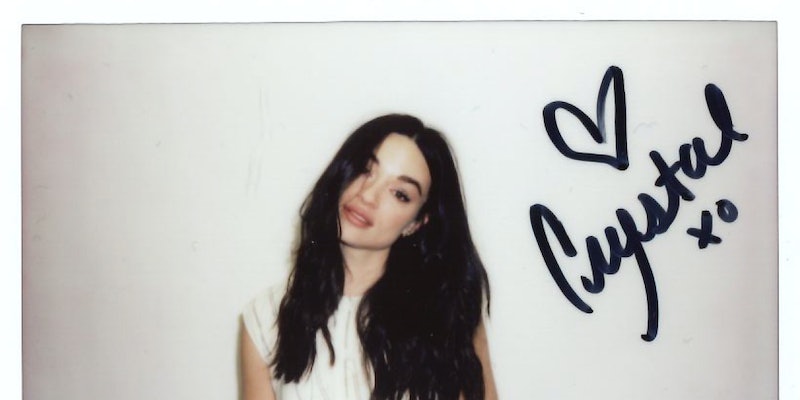 When celebrities hang out with Bustle editors, we want to give them the chance to leave their mark. Literally. So we hand them a pen, a piece of paper, a few questions, and ask them to get creative. The rest is up to them. This time, Gotham star Crystal Reed is leaving her mark in the Bustle Booth.

What Crystal Reed shares with her Gotham character Sofia Falcone is an enviable sense of poise. When the actor breezes into Bustle HQ with coffee in hand, she looks as though she's been here a million times before. And that's exactly how Carmine Falcone's daughter makes her re-entry into Gotham City, a place she hasn't seen since the mobster sent her away from it all at 13. Fortunately, Reed, who also starred on Teen Wolf, is a lot warmer and more genuine than her character. (Could you picture Sofia cuddling up with episodes of Fraggle Rock?) Still, she seems to admire Sofia's willingness to — in Reed's words — "do anything to anyone, no matter what that means" in order to get what she wants and earn her powerful father's approval.

We're just a few episodes into what Reed says is a year-long arc, and Sofia is setting herself apart from other more high-strung Gotham City power players. "I think Sofia has an innate ability to find someone’s need and use that," the actor says, calling her character a "chameleon" with "a very high emotional intelligence." Her powers of perception have already enabled her to secure Jim Gordon as an ally, because she, unlike any other women in his life, is fine with supporting his not-so-secret thirst for power.

"'It is OK for you to want this, and let me help you,'" Reed paraphrases, seductively summing up their relationship. "'And we can sleep together.' She’s the devil on his shoulder tempting and saying, 'It’s OK, don’t worry. We’ll have wine. We’ll celebrate. We can take down Gotham together.'"

Next, Sofia set her sights on getting Oswald on her side. And in that case, the key is the heart that the Penguin wears on his sleeve. In the episode "The Blade's Path," the mobster's daughter appeals to his desperate nature, but he'll probably live to regret letting his guard down.

"She knows Penguin’s desire is solely... he just wants love. He wants to give somebody love; he wants to be loved; he doesn’t have any friends; he lost his mother. So she finds a way to mother him essentially and nurture him and to give him what he wants," she says. "And then she will use that against him."

If you've been hoping to see Sofia meet the other badass women of Gotham, you're in luck. And though backstabbing is par for the course in this city, Reed was happy to learn that, when her character crosses paths with the Sirens, the meeting doesn't "perpetuate this competition with women," but instead is a "coming together of strong female energy."

When I ask if Sofia will let the city get to her, as it has so many other characters, Reed says she's too "calculated" for that. But she teases a different kind of unraveling.

"I think Sofia would only get emotional when it has something to do with her father and her family," she says. "There’s a huge reveal at the end of [episode 11]. We’ll see that her actions have affected every single person in Gotham, from top to bottom. And she has been five steps ahead."

Her Bustle Booth answers promise that you're going to be shocked and distressed by whatever that big development is. They also reveal a love of Casablanca, Jonathan Taylor Thomas, and a simple and chic all-black wardrobe. No wonder the former Los Angeles resident was so eager to take on a job in New York City.

More like this
On 'The Handmaid’s Tale,' Christine Ko Fights Back
By Gretchen Smail
Lauren Lyle Is Keeping The Contents Of Karen Pirie’s Bum Bag A Mystery
By El Hunt
'Grey's Anatomy's New Intern Got Advice From Dr. Bailey Herself
By Grace Wehniainen
Mike Flanagan Teases 'The Midnight Club' In This Exclusive, Creepy Clip
By Grace Wehniainen
Get Even More From Bustle — Sign Up For The Newsletter