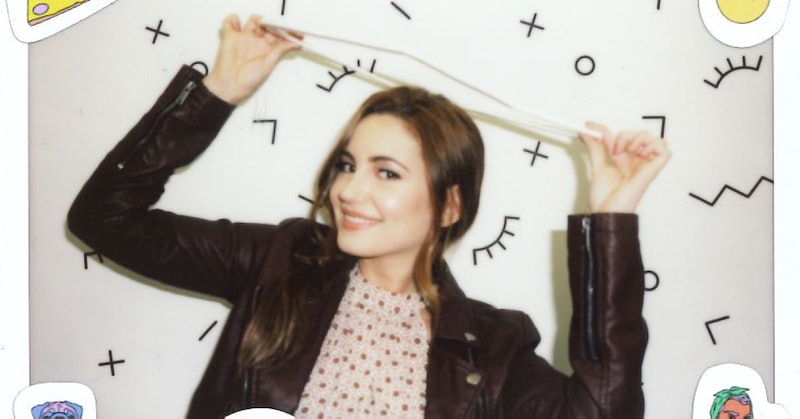 When celebrities hang out with Bustle editors, we want to give them the chance to leave their mark. Literally. So we hand them a pen, a piece of paper, a few questions, and ask them to get creative. The rest is up to them. This time, The Shannara Chronicles star Ivana Baquero is leaving her mark in the Bustle Booth.

Baquero is the definition of a real fangirl. If you take a look at her Instagram account, you'll see many photos of her travels to the Lord of the Rings set in New Zealand. "Bucket List Check: Chilling in #Hobbiton" she captioned one pic of her standing in front a hobbit hole. The Shannara Chronicles actually films in New Zealand, which is a dream location for Baquero. "I'm such a geek when I get there. Even the crew people, most of them have worked on either Hobbit or Lord of the Rings, so I just love it over there," she says. "I feel like I'm part of it in a way."

Being a fan of the fantasy genre made The Shannara Chronicles even more fun for her to work on. Baquero plays Eretria in the series, the second season of which premieres Oct. 11 at 10 p.m. ET on Spike. The series made the move from MTV to Spike for its sophomore season, and the actor can't wait for fans to see the new episodes. "I think the storylines are richer than ever in Season 1," she teases. "Eretria gets to interact with so many other characters, which I think is really cool for all the fans of the character ... there's more special effects, more fights, action."

And, all of that action means that the stars have some serious stunt work to do for the show. Baquero says she does a lot of her own stunts, and puts in hours of training to get everything just right. "It's very intense. It's quite challenging," she says of her first action role. "We get a month's training beforehand and full boot camp where we learn how to sword fight. [We] have fitness training every single day and horseback riding."

So, it's no wonder that, in the Bustle Booth, she describes Shannara Season 2 with the bicep and sword emojis. And, knowing that she does all that stunt training, there's definitely no denying she's just as much of a badass as her character.

But, you may have also caught that she used the heart-eyes emoji in her Bustle Booth to hint at Season 2 will bring, because there some more love drama ahead for Eretria. "She has a story with Wil. I'm not going to say much, but she finds a new person, Lyria," Baquero hints. "They're also going to have a beautiful story going on, but very tumultuous. We'll see why."

Baquero is very grateful that her character's bisexuality is treated with respect by both the show and its fans. "I love how it's just treated so naturally ... This season we get to explore that a lot more, and I think a lot of people are really excited about that," she says. "In Season 1, there were a lot of people 'shipping Eretria and Amberle, so this season we finally will have that connection between Eretria and Lyria."

Fans who want to see the love triangle drama ahead and the special effects and battles of Season 2 will just have to tune in to see how everything shakes out in the new episodes on the new network. All of the action starts Wednesday, Oct. 11 at 10 p.m. ET on Spike.

More like this
'Grey's Anatomy's New Intern Got Advice From Dr. Bailey Herself
By Grace Wehniainen
On 'The Handmaid’s Tale,' Christine Ko Fights Back
By Gretchen Smail
Lauren Lyle Is Keeping The Contents Of Karen Pirie’s Bum Bag A Mystery
By El Hunt
A New 'And Just Like That' Table Read Pic Confirms A Key Character's Return
By Jack Irvin and Grace Wehniainen
Get Even More From Bustle — Sign Up For The Newsletter