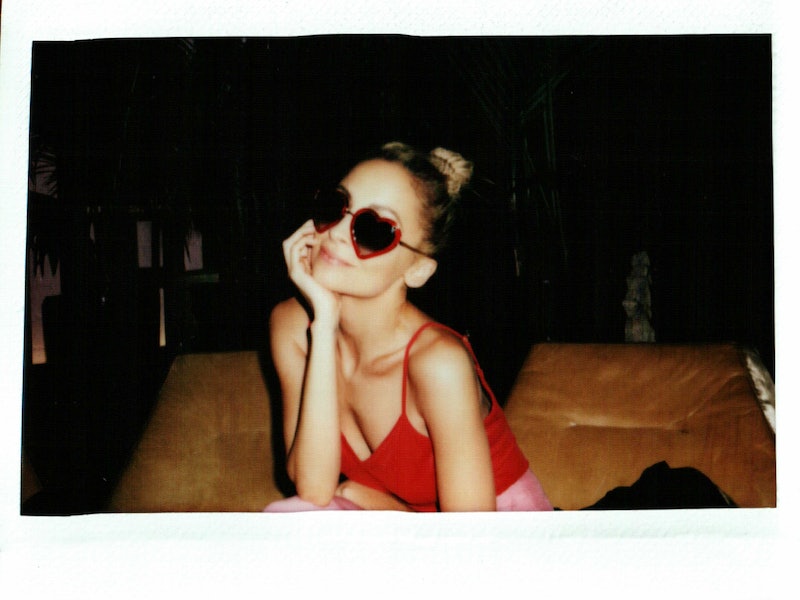 When celebrities hang out with Bustle editors, we want to give them the chance to leave their mark. Literally. So we hand them a pen, a piece of paper, a few questions, and ask them to get creative. The rest is up to them. This time, Nicole Richie is leaving her mark in the Bustle Booth.

Nicole Richie is exactly what you'd imagine she'd be like IRL — uber cool, fashionable as hell, and funny — like, really, really funny. And while the latter trait scored her a leading role in NBC's upcoming Tina Fey comedy, Great News, Richie is still known by many for her incredible style. The House of Harlow designer has come a long way since her Simple Life days (though, who are we kidding — she was super on trend with those lace cami dresses and velour track suits) and has cemented her place not only as a modern style icon, but an in-demand fashion advisor. Recently, Project September founder Alexis Maybank reached out to the fashionista to be the shopping app's ambassador.

"We have long admired Nicole and when we were getting started, we were thinking about people we wanted to work with — someone with amazing style, someone who people could connect with broadly, and someone whose style people admire, day in and day out," Maybank tells me. To kick off festival season, Nicole Richie and Project September hosted an exclusive Pre-Chella shopping event in Los Angeles, with all proceeds going to Planned Parenthood.

Between posing for photos with fans and raising money for charity, Richie took a minute to fill out our Bustle Booth questionnaire. Even if you aren't a fan of her style, you'd be hard-pressed not to fall in love with the charming actress/designer/philanthropist. Just take a look at her answers.

More like this
'Grey's Anatomy's New Intern Got Advice From Dr. Bailey Herself
By Grace Wehniainen
Lauren Lyle Bustle Booth
By El Hunt
On 'The Handmaid’s Tale,' Christine Ko Fights Back
By Gretchen Smail
Bustle Editors Style The Internet’s Most Polarizing Fashion Trends
By Kelsey Stiegman
Get Even More From Bustle — Sign Up For The Newsletter