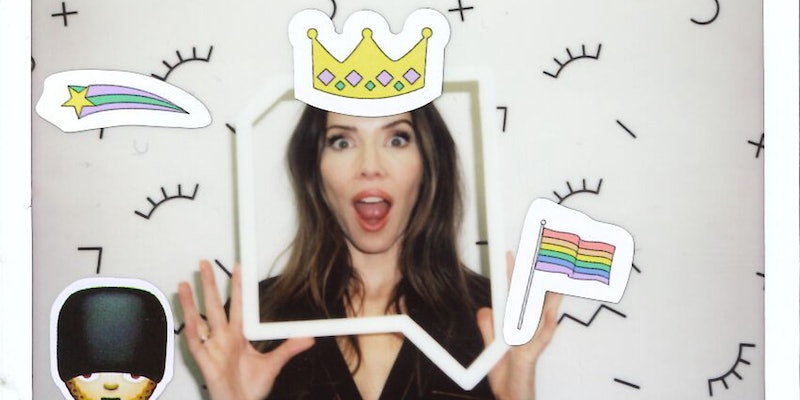 When celebrities hang out with Bustle editors, we want to give them the chance to leave their mark. Literally. So we hand them a pen, a piece of paper, a few questions, and ask them to get creative. The rest is up to them. This time, comedian, actor, and author Whitney Cummings is leaving her mark in the Bustle Booth.

While Cummings is probably more widely known for her cutting, take-no-prisoners humor, her time as a sitcom star on the self titled NBC comedy Whitney, and her work as the creator of CBS' Two Broke Girls, her newest venture takes a sharp turn. On Oct. 3, Cummings released her autobiographical book, I'm Fine... And Other Lies, and showed a completely different side of herself than what fans may think they know.

The books goes into stories Cummings has yet to share with a mass audience — things that she writes, were too personal to share on stage with an audience at a comedy show. And while her words delve into some tougher times in her life, the book still carries her signature wit (see: the chapter on a BS "nutritionist" titled "The Butthead").

And in honor of that signature wit, we asked her to bare her soul a bit more...

Of course, there's more to Cumming's latest venture than personal stories and some choice funnies. Another thing she wears on her sleeve in the book? That age-old conversation about "how hard it is to be a woman in comedy." Though she notes, quite often throughout the book, that sexism is very much a real thing that she (and all women, hello) deal with day in and day out, Cummings wants the world to know, she's done talking about her industry being "the worst" when it comes to gender imbalance.

I don't think the field is sexist. It feels ignorant to me to anthropomorphize a field, as if an abstract noun like archery has the capacity to be judgmental. I don't think fields are sexist, I think people are sexist, and in the comedy field it's just easier to see who they are because they're drunk and yelling at you.

And while the topic of sexism in comedy has been a huge one, Cummings has a point. The way we phrase the conversation, as if the industry itself is the issue, is classic misdirection. There are people in every "sexist" field that are the ones creating that phenomenon. Place the blame where it lies.

Plus, per Cummings, the medium of comedy might actually make it easier to deal with society's sexists. She continues,

And I must say, it's something I appreciate about being a stand-up. I actually prefer in-your-face sexism to the more insidious institutionalized kind because dealing with the other passive aggressive, subtle sexism and gaslighting that women have to contend with in other professions sounds exhausting. There aren't many jobs where you hear sexist insults in the workplace issued so bluntly. I'd much rather someone yell their insults to my face than have my boss DM me corny pick-up lines or send dick pics on the sly after work.

And while no woman ever wants to be treated to sexist commentary or behavior, something about being able to have it out in the open, where you can point at it clearly and say, "Hey, that's sexism," does sound somewhat easier to handle than any of the other oh-so sneaky ways the practice rears its head. (See again: gaslighting.)

Cummings' new book touches on a quite a few topics, all of which she aims to take a different angle on (a la, this sexism in comedy conversation). And hopefully, though she's getting rather real with readers, she can make 'em laugh once or twice, too.

More like this
'Grey's Anatomy's New Intern Got Advice From Dr. Bailey Herself
By Grace Wehniainen
Lauren Lyle Bustle Booth
By El Hunt
On 'The Handmaid’s Tale,' Christine Ko Fights Back
By Gretchen Smail
Here’s Everything You Need To Know About Operation London Bridge
By Bustle UK
Get Even More From Bustle — Sign Up For The Newsletter