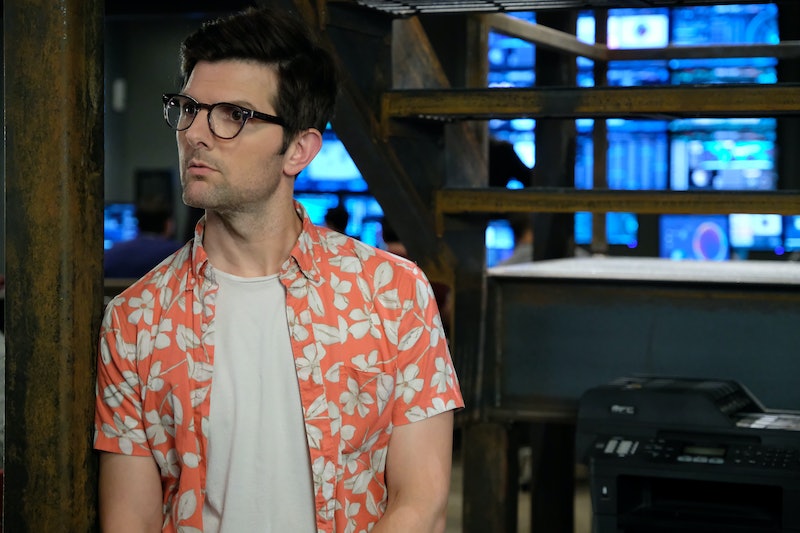 Inspired heavily by both buddy comedies and classic science fiction drama The X Files, Ghosted premieres on Oct. 1 and follows the adventures of Max Jennifer (Adam Scott), a paranormal expert and the author of a book on the multiverse, paired with a hard-nosed, skeptical detective, Leroy Wright (Craig Robinson, channeling his deadpan The Office performance). As a comedy that includes several mentions of Bigfoot in the Season 1 trailer, Ghosted is obviously not tied tightly to reality, but is Max's passion project based on something that actually exists? Is The Multiverse Equation a real book?

Max's book isn't exactly well respected on the show, and his theories seem to have derailed his life when the series begins. (That and the supposed abduction of his wife.) Maybe if Ghosted becomes a huge hit series, the people behind the show might be interested in capitalizing on the show's success and the characters' fame by marketing some real version of The Multiverse Equation, but until then, this tome only exists in the world of the show. So don't go looking for Max Jennifer's name on a bookstore shelf just yet.

However, what's interesting is that while both Max's book and the show are totally fictional, the concepts that the book discusses — the multiverse theory — does have its basis in real theoretical science. On the show, Max gets kicked out of his Harvard professorship when he begins theorizing that his wife was abducted by aliens. In real life, according to Smithsonian Magazine, evidence of the multiverse is puzzling physicists. But not every multiverse theory is the same. One theory explained by Smithsonian Magazine posits, what if "every time a physical particle, such as an electron, has multiple options, it takes all of them — each in a different, newly spawned universe"? Another suggests that the expansion of the universe "continues — just not in our universe where we could see it. And as it does, it spawns other universes. And even when it stops in those spaces, it continues in still others. This 'eternal inflation' would have created an infinite number of other universes."

If there's any flaw in Ghosted's concept, it's that there's almost too much going on, making describing anything about the show's premise a little difficult. There's the buddy comedy between a believer and a skeptic, and there's the Men in Black-esque Bureau Underground, the secret organization that Max and Leroy work for, investigating supernatural and paranormal occurrences around Los Angeles. And then there are the supernatural elements themselves. Max not only believes in the multiverse, but also that his wife was kidnapped by aliens, making him a real Fox Mulder type, pining for a lost loved one and letting that inspire his zeal for the unknown (with more of a comedic twist than a tragic one, granted). But beyond aliens, Ghosted will also tackle other monsters and urban legends. Between all of those out-there theories, Max's multiverse book is actually one of the more grounded and realistic elements you can find on Ghosted.

Because while scientists can't prove or even agree on whether or not the multiverse is actually real — or what would explain it, if it is real — there's a lot more scientific backing for the multiverse than you might think. In fact, according to Futurism.com, a previous inexplicabe "Cold Spot" in our universe could be explained by a "bubble universe" parallel to ours.

So while Ghosted, like The X-Files, will probably wind up implicitly justifying Max's position by making the supernatural elements real, one way in which Max's beliefs are actually reasonable both onscreen and off is his research into the multiverse.

More like this
This Episode 6 Moment Foreshadows Viserys' Fate On 'House Of The Dragon'
By Grace Wehniainen
Nicola Coughlan Shared A Lady Whistledown Excerpt From ‘Bridgerton’ Season 3
By Grace Wehniainen, Alyssa Lapid and Sam Ramsden
'The Lord of the Rings: The Rings of Power' Revisits Iconic Spots From 'The Hobbit'
By Darshita Goyal
Harry Lawtey Is Weighing Up The Price Of Success
By Olivia-Anne Cleary
Get Even More From Bustle — Sign Up For The Newsletter