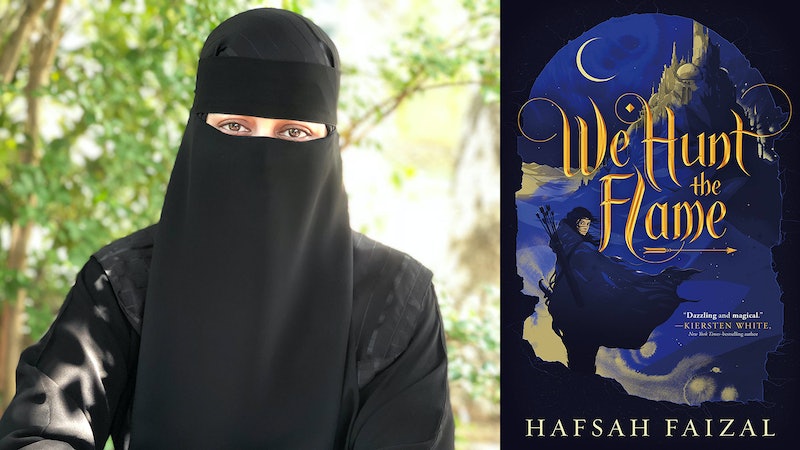 Photo of Hafsah Faizal, courtesy of the author

As she was writing the first draft of what would eventually become her debut novel, Hafsah Faizal couldn’t make it past the first act. There wasn’t anything ostensibly wrong with what she was doing. She was writing a young adult fantasy about a teenage girl who defies the status quo in a Eurocentric world — the basic descriptor that could apply to most young adult fantasies that have hit bestseller lists in the last 10 years. But something didn’t feel right.

So she started drawing a map. A designer and the founder of the web-design company Icey Designs, Faizal says her creative process tends to start with images and color palettes, not words.

“When I was getting [the map] together, I saw that it closely imitated the map of the Mediterranean, with an island in the middle surrounded by countries,” Faizal tells Bustle. “And I thought, you know, why don't I just go further south to set it in the Middle East?”

So she did. She changed the setting to a once-magical country called Arawiya, swapped the main character’s name from Ember to Zafira, and started anew. For the Sri Lankan and Arab author, it made all the difference.

“That's when the story really took off and everything sort of clicked into place,” she says.

"The thing about the Arab world,” Faizal says, “is that it's always demonized or romanticized..."

We Hunt The Flame follows Zafira, the only hunter in her magic-starved caliphate who can enter the sinister, ever-growing wilderness known as the Arz and emerge unscathed. As the Arz threatens to consume more of her caliphate and her people’s suffering hits a fever pitch, she accepts a challenge to retrieve an artifact that could stop the Arz's encroachment and restore magic to Arawiya in the process.

But Nasir, the murderous son of the power-hungry Sultan, is on her tail. Sent to apprehend the legendary Hunter and retrieve the artifact for his father, Nasir struggles to hold on to his last shreds of humanity despite pressure to be nothing more than a cold-blooded killer.

When Zafira and Nasir’s paths finally cross, their conflicting destinies intertwine and pit them against an ancient evil with powers greater and deadlier than either can imagine.

'We Hunt The Flame' by Hafsah Faizal
Amazon

We Hunt The Flame has been heralded by Kirkus Reviews as the perfect book for fans of Assassin’s Creed, a game where players assume the identity of an assassin, swiftly murdering various targets while scaling the buildings of fictionalized Middle Eastern cities.

But while Middle Eastern settings may have become slightly more popularized in video games, they’re still not the typical first, second, or even third choice for fantasy novels across age categories. If you type “Middle East” into Google, you will be greeted with articles of war, photos of war, videos of war. Short of a suspiciously well-ranked listing for a bar and nightclub in the suburbs of Boston, each result holds the same, grim note of the one before it.

“The thing about the Arab world,” Faizal says, “is that it's always demonized or romanticized, and the reality is that it's just home for thousands and thousands of people.”

"My goal was always to introduce people to a world that isn't as distorted as they think. It's just normal."

When Faizal started writing the book in an Arabian world, she knew making her readers feel at home was paramount. Lush descriptions of Arab clothing, decor, and food sizzle and snap off the page, transporting the reader to the liminal space between foreign and familiar. (At one point, she beautifully describes cushions on a stone floor as “soft sighs of color.”) It’s a place where Arab readers craving to see themselves represented in their favorite books as well as non-Arab readers bored of Eurocentric fantasies can find an oasis.

“By making [Arawiya] feel [like home], it makes it accessible to a non-Arab reader,” she says. “My goal was always to introduce people to a world that isn't as distorted as they think. It's just normal. It's just home to all these people. And I mean, I always thought if I can introduce someone to this world and teach them that it's not as bad as you think it is, then I have achieved my goal.”

One of three sisters, Faizal also made sure to fill her vibrant world with vibrant female friendships. This is most pronounced in Zafira’s best friend and “sister of her heart,” Yasmin, who gets married early in the novel. While Zafira finds her power in disguising herself as a man in a caliphate that forbids her to work, Yasmin flourishes within her societally-assigned role. She serves as Zafira’s internal compass, counsels her before her journey, and most importantly, tells Zafira what she needs to hear.

Faizal found it important to make sure Zafira had strong relationships before meeting her love interest later in the novel.

“It's not just the romance that will define her. She has Yasmin’s voice in her head. [Yasmin] is only there for a few chapters in the beginning, but her presence is there throughout the whole book," Faizal says.

Strong friendships aren’t the only persistent presence in the book. One underlying theme in We Hunt The Flame that is evident, particularly to those who know it well, is grief. In the background, the people of Arawiya grieve their days of magic and prosperity past. At the forefront, Zafira grieves her relationship with her ailing mother and her friendship with Yasmin, which has been forever changed by her marriage. Nasir grieves his late mother and the person he was, or could have been, before he was hardened into a killer.

"Grief is like a river," she wrote. "The flow needs a steady outlet, or it'll flood."

When I first asked Faizal about how grief may or may not have informed her debut novel, she didn’t know if she could answer. But a few days after our phone call, she messaged me on Twitter.

"Grief is like a river," she wrote. "The flow needs a steady outlet, or it'll flood, and that's what WE HUNT THE FLAME became for me. I had these emotions and memories and fears bottled up until everything flooded across the pages, stemmed from some place personal and from the bleakness of our world."

“I remember this because I tweeted about it. Having her succumb one step further every time my own mental health darkened," she wrote. "It's fascinating how much of it felt right in the story, how much of it rang true and remains in the edited story. Zafira is an extension of myself in so many ways that it's scary!”

But for Zafira, Faizal wrote, there was a light at the end of the tunnel, what she calls a "vein of hope in the story, a light they're searching for: a reminder that there is an end. There is a way out."

And there was one for Faizal as well. In the months since Faizal’s book has sold, she’s developed an ardent fan base, particularly in the Muslim YA community. Faizal’s identity as a niqabi (a woman who wears a form of traditional Muslim dress that covers the face from the nose down) was made public first in a small way via her design business, and in a larger way once her book deal went public. While she was initially nervous to publicize this part of her identity, the response from other Muslim women in the community has exceeded her expectations..

“Every day I get a few messages. I have actually had several people say that either their parents ask them to add the veil or they felt they wanted to, but then they felt like they wouldn't be able to do anything. But then seeing that I have done it, that I've run my own business and then I’m getting a book published,” she says. “Seeing that someone else could do it makes them feel like they can. And I've actually seen a couple of people whose profile images were unveiled before, and then they're wearing the veil in the next one.”

Faizal is currently working on the second book in the Sands of Arawiya duology. (Yes, it’s really only going to be a duology.) But readers who come away from We Hunt The Flame and its successor obsessed with Arawiya won’t have to say goodbye to it just yet.

“I'm hoping that I can expand in the same world," Faizal says. "I feel like it's big enough to tell more stories. I'm not ready to leave it just yet.”

More like this
'That '90s Show' Star Callie Haverda Got Advice From Mila Kunis & Ashton Kutcher
By Brad Witter
24 History-Making Black Women You Probably Didn't Learn About In School
By Ayana Lage and JR Thorpe
25 Inspiring Quotes From Black Women To Celebrate Black History Month
By Kyli Rodriguez-Cayro and JR Thorpe
Here's How Netflix Should Adapt Prince Harry's Memoir Into A Movie
By Ginny Hogan
Get Even More From Bustle — Sign Up For The Newsletter
From hair trends to relationship advice, our daily newsletter has everything you need to sound like a person who’s on TikTok, even if you aren’t.