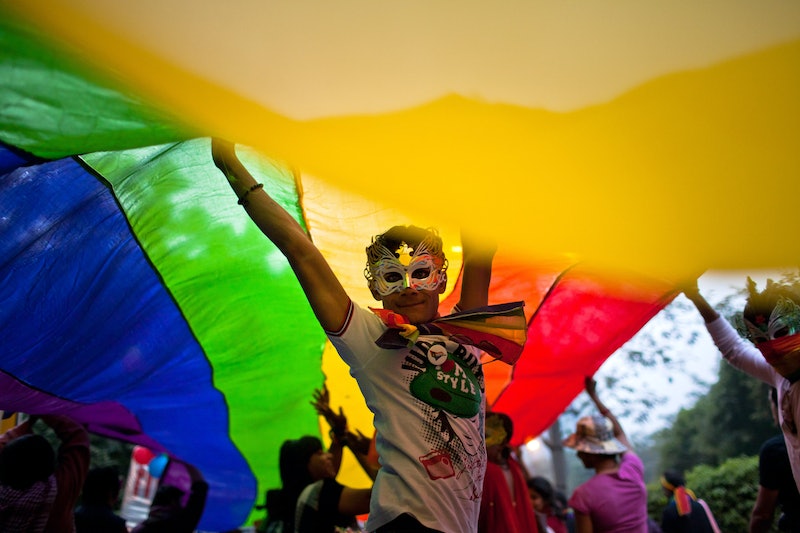 People in India are breaking out the rainbow flags after the Supreme Court there made a landmark decision about LGBTQ rights. On Thursday in Delhi, the court struck down an archaic law that criminalized consensual gay sex, The New York Times reported.

Crowds threw confetti, cheered, and cried happy tears after officials announced the end of Section 377 in the Indian Penal Code, a law imposed under British rule, according to The Times. The law made it illegal for members of the LGBTQ community to have intercourse, calling it "against the order of nature," CNN reported. The maximum sentence for breaking the law was life in prison. Although the law was rarely enforced in full, lawyers said the criminalization of LGBTQ conduct perpetuated "a culture of fear and repression," according to CNN. The law also prevented progress in fighting diseases such as HIV and AIDS, and contributed to blackmail of LGBTQ community members, The Daily Beast noted.

Amnesty International, an organization that fights to end abuses of human rights across the globe, tweeted in celebration of the ruling: "Thanks to the tireless efforts of LGBTI activists & their lawyers, this milestone is now a reality. Today is a good day for human rights."

During hearings on the law that happened back in July, India's central government said it wouldn't take a position on the law, which was written in the 1860s, The Times reported. India's Prime Minister Narendra Modi hasn't spoken out much about gay rights, although his party is conservative on some social issues. The ruling Bharatiya Janata Party hadn't taken a position on the law, The Washington Post reported.

Citizens and activists across the country rejoiced the ruling. Yashwinder Singh — a member of the LGBTQ rights group The Humsafar Trust in Mumbai — told CNN:

The constant fear of 377 we have felt will not be there for the coming generation. Laws getting passed is one thing but changing the society is a big challenge... Our work has started multifold now. We have to go and talk to people and change their mindset so that they accept every human as one.

Others who weren't in the country at the time of the ruling took to Twitter to express their support for the court's decision. Priya Arora, the front page editor of The Huffington Post wrote a thread about what it meant to her to be both Desi and queer. She said that as she came out to her family and friends, she thought she could "never return to my motherland as our family had every winter throughout my childhood because of my gender presentation and sexuality."

She said that she thought of her family on the historic day as Section 377 was scraped. "Congratulations, India. You’ve always had my heart, and I can’t wait to visit again," Arora wrote.

Bollywood producer and director Karan Johar also commented on the history decision: “So proud today! Decriminalizing homosexuality and abolishing section 377 is a huge thumb up for humanity and equal rights! The country gets its oxygen back!”

With confetti in the air and rainbow everywhere, the celebrations of the human rights feat are being celebrated not just in India, but across the globe.