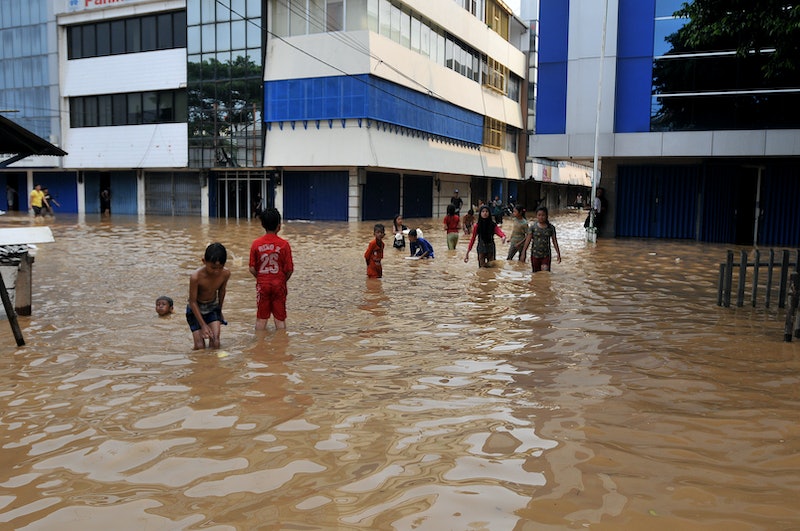 According to the country's planning minister, Indonesia will relocate its capital from Jakarta, due to concerns over the city's long-term habitability. Jakarta the fastest-sinking city in the world, according to the BBC, having sunk eight feet in the last 10 years, and was recently ranked as having the worst traffic congestion of any city on the planet. Rising sea levels caused by climate change have made the city's long-term prospects even bleaker, experts say.

Planning Minister Bambang Brodjonegoro said Monday that Indonesian President Joko Widodo had decided to relocate the capital, according to the Guardian, but otherwise didn't reveal any details about the move. Officials have yet to announce a new location for the country's capital, but state media reports suggest that Palangkaraya, a city on the island of Borneo, is a front-runner, according to the BBC.

With a population of 10 million, Jakarta faces several unique challenges, due largely to its location, geology, and city planning. Because the city has very few sewers or piped-in drinking water networks, locals extract water from underground aquifers for drinking, bathing and other basic daily needs, according to the New York Times. Over time, the extraction of this water has deflated the ground below Jakarta, causing the city to steadily sink. According to one estimate, 95% of the city may be submerged by 2050 if groundwater extraction continues at current rates, the BBC reports.

This isn't just a long-term concern: Jakarta regularly experiences flooding, primarily due to excessive groundwater extraction. This occurred most recently on Saturday, when 37 areas of the city were flooded, according to the Jakarta Post. In the Muara Baru district, an office building was abandoned entirely after the entire ground floor became submerged, the BBC reports, and according to the Times, about 40% of the city is now below sea level.

But although groundwater extraction is the primary cause of Jakarta's sinking and flooding, the problem has been exacerbated by climate change, according to the Times. Local climate researcher Irvan Pulungan, who advises Jakarta's governor, told the Times that the sea level in Jakarta may rise as much as 3 feet over the next century as a result of climate change, and rising sea levels in the region make the flooding even harder to combat.

But Jakarta has problems that extend beyond its geology. According to a 2016 study based on GPS data, Jakarta has the worst traffic congestion of any city in the world. A trip to the center of Jakarta from Bangor, the biggest satellite city, typically takes two hours, according to the Guardian, despite being only 25 miles away. The city unveiled its first metro line in April to supplement its existing bus and commuter trains — but according to the BBC, only 20% of the city's residents use public transportation.

The prospect of relocating Indonesia's capital isn't new. The idea was proposed by the country's first president as far back as 1957, according to the Guardian, and some are skeptical that it's the right decision.

“You don’t solve a problem by just moving it away,” Elisa Sutanudjaja, director of the Rujak Centre for Urban Studies, told the Guardian. “Jakarta is quite similar to Tokyo in the 1960s, with its land subsidence, flooding, natural disasters and overcrowding. If you really want to solve the problem then they should tackle it, not just move it.”