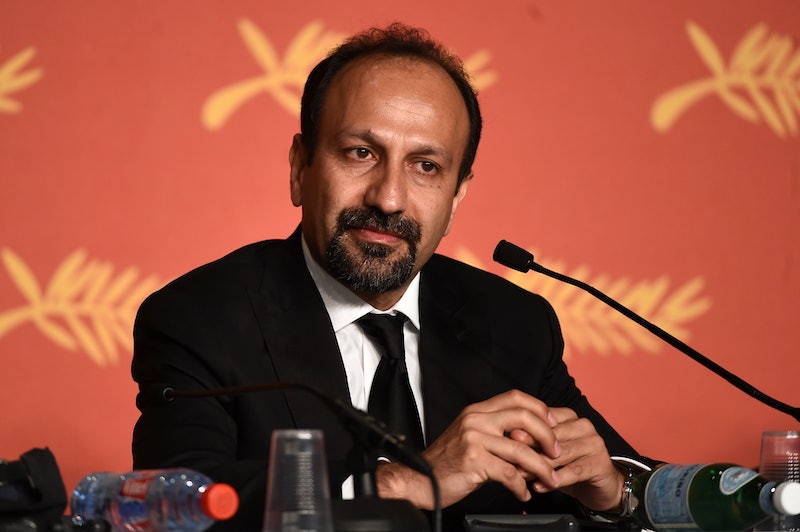 The world has been in shock ever since President Donald Trump issued an executive order that temporarily bans individuals from seven countries — Libya, Iran, Iraq, Somalia, Syria, Sudan, and Yemen — from entering the United States. This awful move impacts countless individuals and families in the U.S. and abroad, including the Oscar-nominated Iranian director Asghar Farhadi — who, without some sort of special pass, wouldn't be able to attend the Academy Awards on Sunday, Feb. 26 due to his heritage. Yet on Jan. 29, the director shared a statement with The New York Times that said that even if he is allowed to travel to America, Farhadi won't attend the Oscars, as he is standing with immigrants and refugees affected by the ban.

Farhadi's film, The Salesman, is nominated for an Academy Award for Best Foreign Language Film. The director's previous film, A Separation, clinched the same award in 2011, making it the first time an Iranian film had won the category. This year, Farhadi was expected to attend the Oscars for The Salesman, and initially, as he said in the statement, he had no intention to boycott the Oscars. He would have instead preferred to "express my opinions about these circumstances in the press surrounding the event." Yet as it turns out, he said, he won't go to the Oscars no matter what, as the "ifs and buts" that would go along with his admittance "are in no way acceptable."

Farhadi's dedication to standing with his fellow citizens of nations Trump considers dangerous is a powerful move. He's a powerful figure in the film industry who could've attended the Oscars to support his movie, but instead, he is stepping back and making his position known. It's a commendable and important action, and perhaps Farhadi's decision to stay home will inspire others to follow in his footsteps.

In his statement to the Times, Farhadi expanded on his thoughts about the ban, writing,

"Hard-liners, despite their nationalities, political arguments and wars, regard and understand the world in very much the same way. In order to understand the world, they have no choice but to regard it via an 'us and them' mentality, which they use to create a fearful image of 'them' and inflict fear in the people of their own countries."

Farhadi acknowledged in his piece that "hard-liners" aren't just an American concept — fear-mongering can be seen in countries across the world as a means to "justify extremist and fanatic behavior by narrow-minded individuals." It's a depressing, if crucial, message, but Farhadi ended the piece with a show of optimism, saying, "However, I believe that the similarities between human beings on this earth and its various lands, and among its cultures and its faiths, far outweigh their differences."

Let's hope these similarities keep our world united, despite the divisions currently taking over.