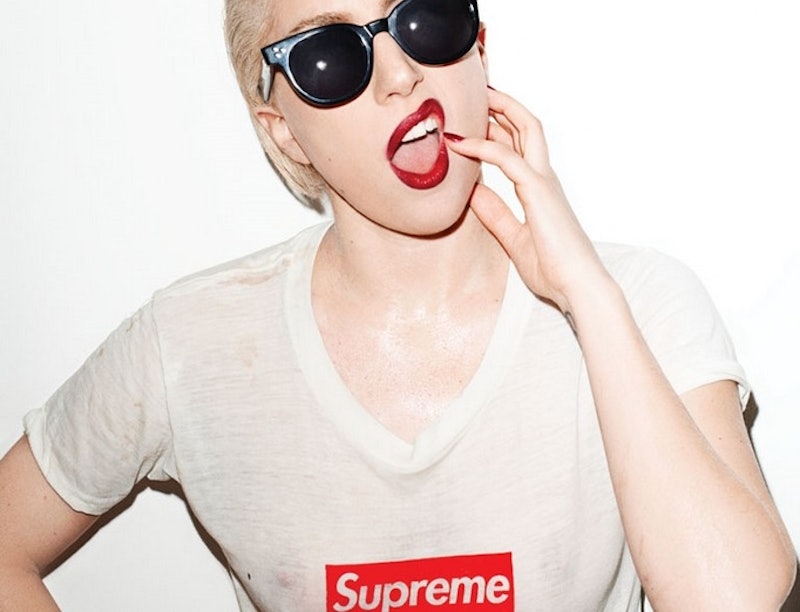 If you're a fan of streetwear brand Supreme — and have been ogling their fanny packs, '90s boy band sunglasses, and floral print bucket hats all season — then you're in luck, because the label is about to expand to exciting new territories. Supreme might launch a makeup line, meaning it's about to bring you some logo-ed, effortlessly cool items to your makeup drawer.

The news was leaked by Instagram account @supreme_leaks_news, which is dedicated to uncovering Supreme's undercover products. The account shared the rumor with followers by posting an image of a lipstick tube heavily decorated with the brand's logo, with the iconic white block letters popping against a red background. The lipstick shade was, of course, that unmistakable red that the label is known for. What else could it be if this was the first lip product released by Supreme?

It would be a missed opportunity to have gone another way — like a universal nude, for example. After all, that was the first lip product that Fenty Beauty launched in its collection, releasing the Gloss Bomb Universal Lip Luminizer in a rose nude. It's not an uncommon route to go down when testing the waters with a new line foray.

The caption of the photo was clear about the rumor, writing, "Supreme could possibly be releasing a lipstick at some point according to a leak we have seen. Thoughts?"

There were plenty of thoughts. Many people were all in for the expansion, already envisioning their particular red to be their favorite in their makeup bag. "My new red tbh," one follower said. " I’ll take ten pls," another agreed.

Another person predicted that everyone will now stock up on lippies since Supreme will be making them, no matter their gender. "Everybodys gonna go around with lipsticks from now," the follower speculated.

Some wondered why the brand would go in the direction of creating makeup if Supreme caters mostly to male customers, but many people in the comments jumped in to share that a lot of men wore makeup, too — and if they personally didn't, then they could buy it for their partners.

On the other hand, some worried that if the lipstick launch wouldn't be in collaboration with an already existing makeup company, then the formula might be low quality since Supreme isn't an expert in cosmetics.

This is all speculation of course, since Supreme hasn't actually confirmed the leak. But it wouldn't be out of left field for the streetwear brand to go in that direction, especially considering how many designer brands have eventually delved into cosmetics. For example, Dior cosmetics launched in 1969, a little over 20 years from its inception, and Chanel opened its cosmetic line in 1924, 15 years after its label launch. It's not uncommon.

But in the meantime, Supreme fans just have to wait and see if this is simply a rumor or real plans that are ready to drop. Fingers crossed that come fall, we all can invite Supreme into our makeup routines.