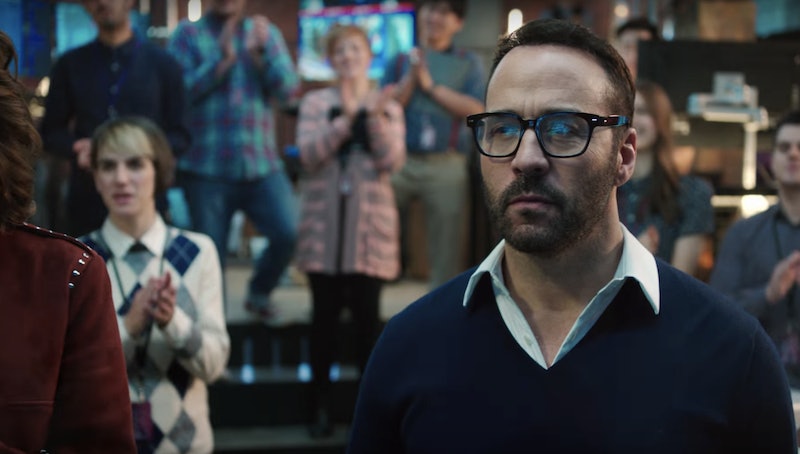 CBS' new drama Wisdom of The Crowd wants to answer the age-old question: Are two heads really better than one? What about two billion? The series, premiering on Sunday, Oct. 1, wants every smartphone owner to participate in global crime-solving. But is Allsourcer a real company, or even a viable one outside of the show? Surprisingly, the tech world on Wisdom of The Crowd mimics real life in more than one way.

Though the show displays futuristic tech (it's hard not to watch technology-plus-crime-solving without thinking of Minority Report), it references to technology that could easily be available today. Even Allsourcer, the company Tanner sells to fund his SOPHE project, sounds a lot like Hootsuite or Sprout Social. Allsourcer is described as a "social media aggregator app." But if you're not a professional traffic manager or a social media editor, picture one giant page that monitors all of your social media platforms simultaneously. You're able to scroll through, moderate, schedule posts, etc., for every profile maintained by you or by your company.

Overall, it's a great, vague, buzzword-y way to explain Tanner's wealth. Older viewers will know it's "hip," if borderline made-up-sounding, and those more engaged with social media will respond to the Allsourcer product with "yep, that could make a guy like him money."

In fact, CBS' new procedural seems to mimic the real-life tech landscape in another way too. The New York Times pointed out, somewhat wryly, that Wisdom of The Crowd displays the ease with which media celebrates rich jerks. Particularly, straight, cisgender, white ones. That said, it's not a comedy-drama about the tech world, like HBO hit Silicon Valley. And unlike The Social Network, which was adapted from a book that chronicled the rise of Facebook, Wisdom of The Crowd is solidly fictional. It's neither humorous nor satirical. In fact, it's based on a nearly-identical Israeli predecessor of the same name, like famous comedy hour Homeland.

Though it incorporates elements of science fiction, it's a fairly standard crime procedural. Piven's tech CEO on Wisdom of The Crowd is like a smarter, slicker, more palatable version of his Ari Gold character from Entourage; Tanner is abrasive and all-powerful, but at least the circumstances that motivate him are compelling. That may be a problem for the series, though. The A.V. Club's early review suggests that Wisdom of The Crowd is best when focusing on the show's tech, and not its characters.

As stated in previews, Piven's Wisdom of The Crowd character has designed SOPHE to promote crowd-sourced crime solving. Specifically, one crime: Tanner's daughter's murder. Since "the world works together to solve one tech bro's crime" doesn't seem a strong enough premise to sustain a full season of hour-long episodes, it seems likely that a twist will emerge; perhaps SOPHE will be put to new use before the pilot ends. Much like SOPHE itself, though, this is all yet to be. The tech, which takes its name from the Greek word for "wisdom," is not currently in development in the real world. At least, no one's announced that it is.

After all, having a real-life counterpart to SOPHE would likely be difficult to monitor. (It sounds somewhat similar to Citizen, which allows NYC residents to track nearby crimes and upload live videos. That app, previously named Vigilante, was once "booted" from the App Store, according to NBC.) As anyone who's watched an episode of Law & Order knows, verifying a witness' statement is no easy task. In procedural episodes wherein a tip line is opened, they essentially do it as a last resort; sorting through rando calls for the truth is almost never worth it.

Tanner's SOPHE will allow witnesses to submit photo and video evidence of crime, but how much time will be dedicated to proving its legitimacy? Will there be such a thing as an anonymous tip? It will be interesting to see how Wisdom of The Crowd takes it on.

More like this
Shonda Rhimes' Net Worth Makes Her One Of The Wealthiest People In TV History
By Hugh McIntyre
The Best 'Grey's Anatomy' Intern Moments, From MAGIC to Glasses
By Grace Wehniainen
'The Rings Of Power' Episode 7 Will Feature An “Unlikely Pairing Of Characters”
By Grace Wehniainen
'Firefly Lane' Season 2 Will Be The Show's Last — But There's A Twist
By K.W. Colyard and Grace Wehniainen
Get Even More From Bustle — Sign Up For The Newsletter