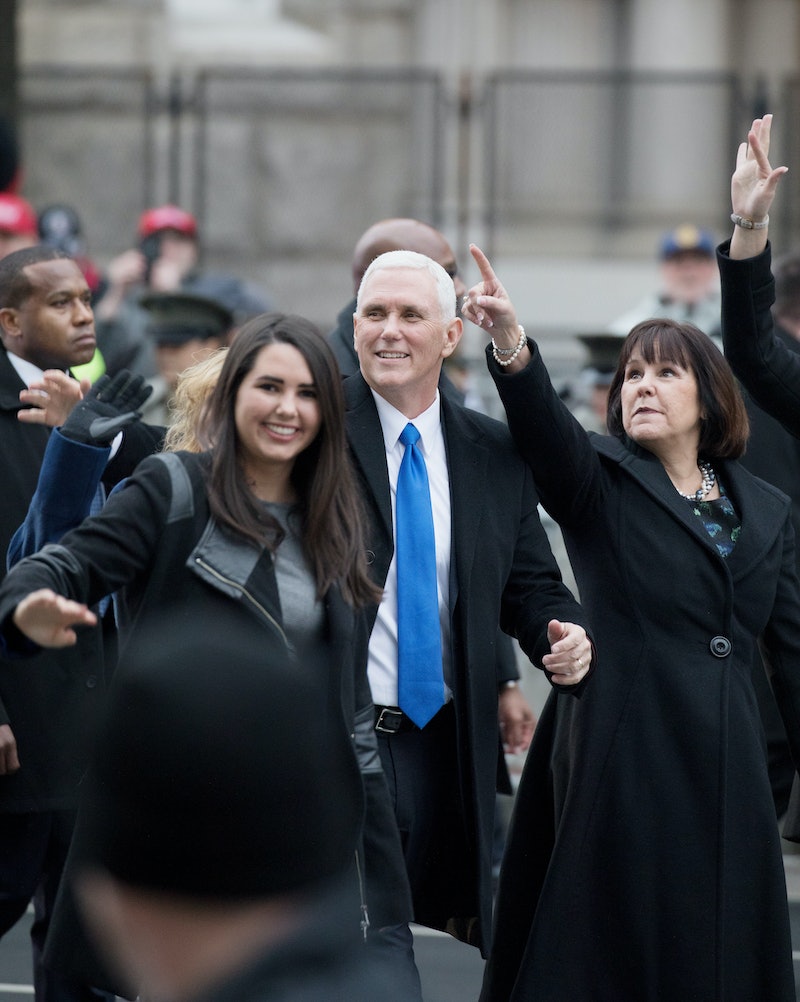 Vice President Mike Pence is known for his socially conservative positions. As Emily Crockett noted in Vox, Pence signed every anti-choice bill passed by the Indiana state legislature during his time as governor. He also infamously supported the "religious freedom law," which offered protections for people who discriminated against the LGBTQ community (he later signed amendment that overrode that). But it turns out that at least one of his kids leans further to the left — is Audrey Pence a Democrat?

Almost following in her dad's footsteps, Audrey was accepted to Hanover College, according to the Indy Star. However, she opted for Northeastern University in Boston, instead. Also not following in her dad's footsteps, Audrey told NBC affiliate WTHR in 2013 after the vice president's win as governor of Indiana, that she doesn't vote down party lines. And yet again, unlike her dad she said she's liberal when it comes to some social issues. She even said that Pence is OK with that, explaining, "Probably the person I get the most respect from is my dad on that and he has always." Audrey added, "He tells me so many times, 'I am proud of you for having your own opinions and looking into things.'"

Set to graduate in 2017, the youngest Pence is an international studies major, and she's dipped her toes in journalism. Audrey took part in the Fuller Project for Inter­na­tional Reporting, a non­profit news orga­ni­za­tion based in Turkey that focuses on the role of women in the Middle East. Pence took part in a co-op internship program. During it, she helped to publish pieces in Elle, the New York Times, and she even shared a byline on the CNN International website in a piece on the 100th anniversary of the Armenian Genocide with the headline, "Why Turkey won't say the G-word when it comes to the Armenians."

But journalism might not be her forever. Pence told her university newspaper, she wants to work overseas again, but this time in a different capacity:

I’ve talked to a lot of people who are for­eign offi­cers and seen the work they do and many have said they are all very much gen­er­al­ists rather than spe­cial­ists, which is some­thing I really iden­tify with; being able to take dif­ferent lessons from all around the world and applying them."

In a somewhat sharp contrast, while serving as governor of Indiana, Pence ordered all state agencies to refuse Syrian refugees during the civil war that's left hundreds of thousands dead and millions more displaced. Here's hoping the vice president takes a page from his daughter's playbook.