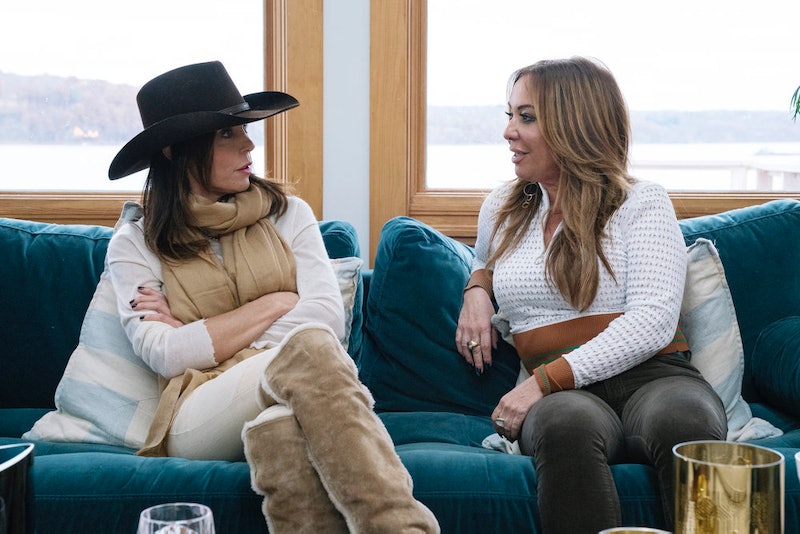 From the moment Barbara Kavovit was announced as the next new cast member of Real Housewives Of New York, it seemed she'd fit in beautifully. She's a tough-as-nails New Yorker. She is successful in her own businesses. She doesn't take guff from anyone. And it turns out that this is another way Barbara really fits in with the group — she's a Housewife only in the context of the show. Like the rest of her cast mates, Barbara from RHONY isn't married at the moment.

Real Housewives Of New York has been on long enough that fans have been able to watch the highest highs and lowest lows of the cast's collective lives. They've gotten married, had children, and, perhaps most recently and most en masse, gotten divorced. Luann de Lesseps, Ramona Singer, Bethenny Frankel, Sonja Morgan, and Tinsley Mortimer have all gotten divorced from their husbands at some point in the past ten years. Dorinda Medley, meanwhile, lost her husband, Richard, to liver failure in 2011 and is currently in a relationship — but for all intents and purposes, all of the women of Real Housewives Of New York are single.

Barbara is, too, here to carry on the tradition of not being "all uncool."

According to the New York Times, Barbara was married to her ex-husband, also a contractor, and they had a son, Zachary. They met when he was a subcontractor on one of her projects and fell in love, but their marriage "evaporated" shortly after 2011. “Things don’t always work out the way you want them to,” Barbara said. “You have to recreate yourself for the changing times. You have to be prepared.” The Daily Mail reports that Barbara is a single mom to Zachary, so it doesn't seem as if Barbara has ever remarried following her first divorce. Barbara posts pictures of her and Zachary during holidays, and they make a lovely family.

Barbara's Instagram is basically just pictures of her on various construction sites. Sometimes, her mom is in the photo, and sometimes, her son is. If Barbara is in a relationship with anyone, she's not showing it. That's fine, too — being a Housewife comes with a certain degree of notoriety that can suffocate a new relationship. If Barbara is with anyone, it's definitely her prerogative to keep it a secret.

Not a secret? Barbara's dedication to her work. She's a DIY queen, with a company, DIY-VA that makes tools specifically for women. She also runs Evergreen Construction, and starting her own construction business in New York was no picnic, as she explained to Forbes. She noted that "99% of the people that run construction companies in New York City are men... To start your own construction company in New York City, you have to have balls of steel and not take no for an answer, and learn to deal with condescending nonbelievers." (That should help her with Ramona, too.)

Right now, it seems like Barbara's companies are her focus and she doesn't have time for relationships. That's something all the RHONY women can get behind — these women are too busy building their own empires.