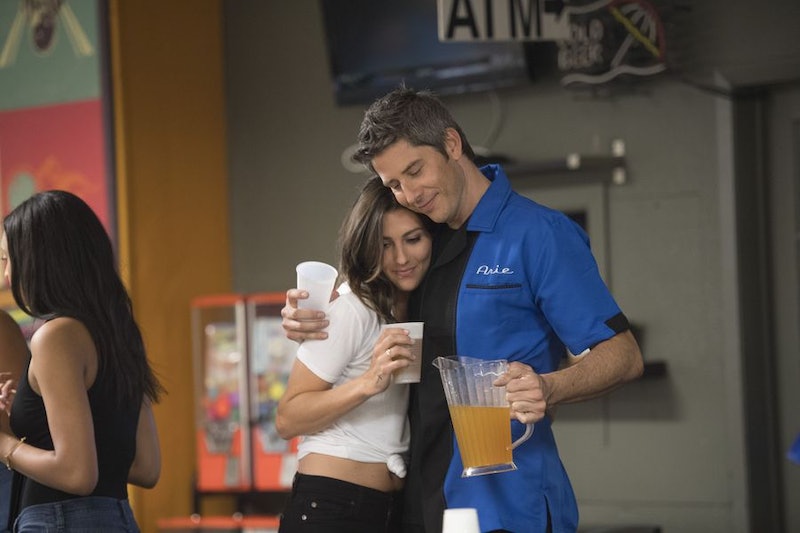 There are often a few ladies that stand out as immediate frontrunners on The Bachelor (producers: Fallon Jethroe), and this season is no different. Becca has been one to watch on Arie Luyendyk Jr.'s season since she first stepped out of the limo and had Arie fake propose to her. They had an immediate connection, easy chemistry, and a mutual maturity. Oftentimes, fans will look to frontrunners' social media to try and determine their relationship status and thus the ending of the show. So, is Becca single after The Bachelor? Arie is certainly taken with her.

Arie wrote about his immediate connection with Becca in his People blog. He gushes about their first date and also talks about how instant their connection was. He wrote:

"From the moment I met Becca K., I knew she was really sincere about being on this journey. Just because I was now Bachelor doesn’t mean I didn’t have insecurities too, and that first night, she made me feel so comfortable. On a night where everyone’s nerves, especially mine, were out of control, she stood out as someone I could be myself around. To me, that’s so important in a relationship. It didn’t hurt that she is also stunningly beautiful."

Would I gush that much about my ex online? It's possible that Arie's flowery writing is more than just nostalgia and indicates that he picked Becca. But, he could just be leading us on. Unfortunately, Becca's social media isn't much help in sleuthing her post-show relationship status either.

A lot of Becca's social media is devoted to the friendships she made on the show. She posted a series of photos to Instagram, with the caption, "Did we just become best friends? #Yup." In the photos, she highlights how all the Bachelor ladies are holding hands. It's one of many posts about the ladies from the show. Even if she didn't come away from the show with a romantic partner, at least she has a set of great friends.

Meanwhile, though, everyone else in The Bachelor world seems to be talking about how much potential Becca and Arie have as a couple. After the date where Rachel Zoe fitted Becca for dresses, Zoe tweeted about the clear connection she saw.

While we don't know if Becca is dating Arie, we do know who she's not dating. Becca posted the below photo of her and a male friend with a cheeky caption.

“He’s not my boyfriend,” — me every time I post a photo with a guy. Meet Jeremy. He’s 26, a publicist, looking for a guy 6’1” with facial hair, tattoos and a dog (preferably for me to snuggle with when he’s out on dates).

That's not the first time Becca has poked fun at people's tendencies to jump to conclusions based on a photo. She captioned another Instagram snap of her and a male friend with this caption:

"If I had a dollar for every time I was asked if we are dating/if we are going to date/why we aren't dating, I would probably be able to buy at least 3 chipotles. With guac."

On the show, Becca is starting to fall for Arie, and her nerves about the process are apparent. In a promo for an upcoming episode, she says, "I'm nervous about this group date. There was the initial connection on our first date but that was so long ago now. At this point I just want more time. I really want another one on one.

Even a one-time frontrunner can lose steam in the highly competitive atmosphere that is The Bachelor. So, fans will just have to keep watching to find out what happens between her and Arie — because Becca's not giving anything up on social media.