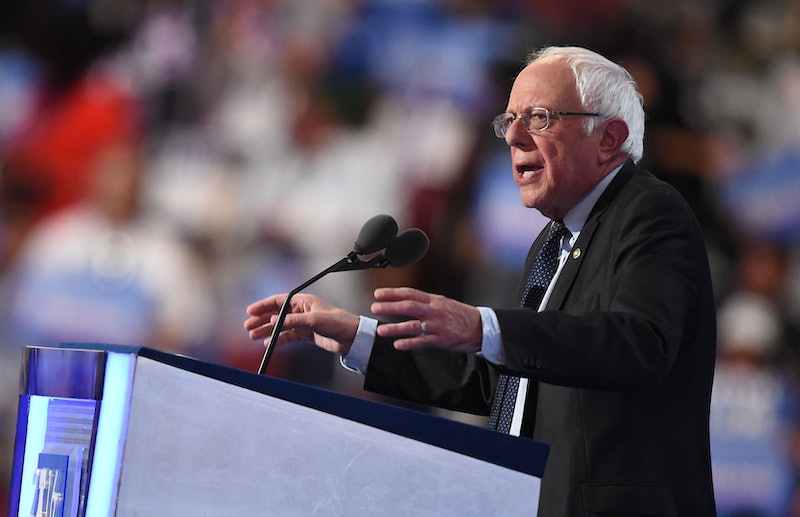 Following the inauguration, tradition has it that the newly sworn-in president attends inaugural balls to celebrate their new term at a formal, black-tie affair. Contrary to popular belief, there actually isn't one big inaugural ball. Rather, there are several different official balls organized by the Presidential Inaugural Committee and held all over the city of Washington, D.C. The official balls are invite-only (though there are some more casual unofficial ones), and the president, vice president, and their spouses usually stop in to make appearances at multiple parties held in their honor. So is Bernie Sanders at the inaugural ball? We do know that balls are not exactly the senator from Vermont's style.

He made headlines last February when he told Robin Roberts in an interview on Good Morning America that, if he won the election, he wouldn't wear a tuxedo to his own inaugural ball in protest of their inherently classist nature. "I've probably got myself in a lot of trouble right now and my wife disagrees with me, no doubt, but a tux is kind of a symbol of class privilege," he explained, "That says I'm really important and I'm fancy, and you're something else."

He hasn't confirmed attendance at any of the balls so far, but, given his attitude toward acts of grandeur bestowed upon humble civil servants, it seems unlikely that he'd attend any of them. Senator Sanders will, however, be in D.C. for the inauguration.

On Friday morning, Sanders posted this powerful video on Twitter reminding his supporters to keep their eyes on the prize.

Not only does he plan to attend President-elect Trump's inaugural address itself, but Sanders also organized nationwide rallies at the start of Inauguration Week to protest the cuts to the Affordable Care Act which Congress recently introduced. On Jan. 15, he was in Warren, Michigan, kicking off the local chapter of his Our First Stand: Save Health Care rally, which was led by congressmen in different cities all over the country. Senate Minority Leader Chuck Schumer and House Minority Leader Nancy Pelosi co-sponsored his call to Democratic members of Congress to organize rallies in their home states in an effort to actually connect with their constituencies and show up for them.

As for President-elect Trump, he'll be taking the inaugural balls at a slower pace than his predecessor, too. When Barack Obama was sworn in, he and Michelle Obama attended nine inaugural balls over the course of the evening. It has been reported that President-Elect Donald Trump and the incoming first lady Melania Trump will only attend three inaugural balls.