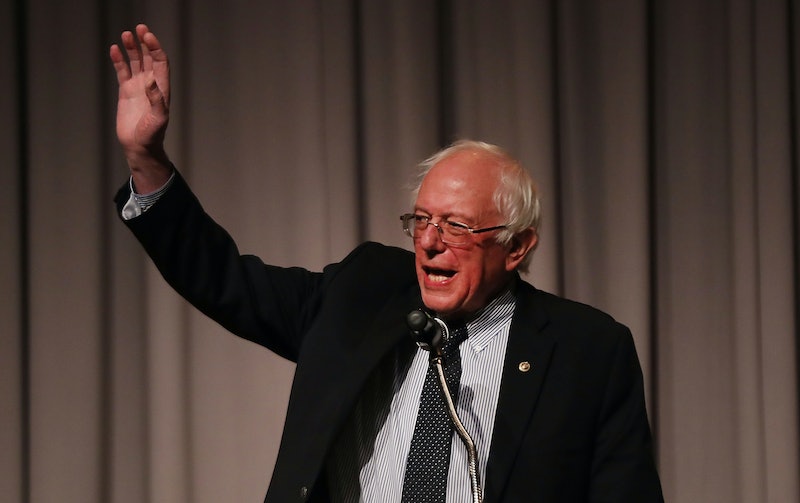 As the inauguration of President-elect Trump approaches, speculation as to who will be attending has become a kind of pastime for many media pundits and political junkies. After all, this hasn't been a normal election cycle, and many believe that Trump poses a unique threat to American democracy itself. Of particular interest is the roster of Democrats who plan to be present on Jan. 20, since millions of their constituents are counting on them to be a check against the incoming president. Naturally, an oft-heard name in this parlor game is Sen. Bernie Sanders. And while he has not yet indicated whether or not he will show up for Trump's swearing-in as president, Sanders has made it abundantly clear that he is ready to fight for his ideals.

Joining up with House Democratic Leader Nancy Pelosi and Sen. Chuck Schumer, Sanders has called on fellow Dems to hold several pre-inauguration rallies. Slated for Jan. 15, the three have described their effort as a "day of action," a chance to show the incoming president, and the nation at large, that they will fight to keep the programs they believe in. Calling this initial set of rallies "Our First Stand: Save Healthcare," Sanders is prepared to do just that, from ensuring funding for Medicare and Medicaid to trying to keep Obamacare from being repealed.

Whether or not Bernie Sanders chooses to follow up his pre-inauguration protest rallies with a Jan. 20 inauguration cameo, plenty of his fellow Dems have announced that they are attending. Bill and Hillary Clinton will both be at Trump's inauguration, in keeping with the longstanding tradition that both former living presidents and losing candidates be present as a sign of national unity and goodwill. Hillary Clinton promised as much in her concession speech, and as Hillary Weaver points out at New York Magazine, "Their [Bill and Hillary Clinton] attendance is the safest P.R. bet, especially in the world of vitriolic Trump supporters looking to panic over something of this nature."

But not all Democrats are following suit. Rep. Katherine Clark of Massachusetts has announced that she is not going, as a protest against normalizing Trump, who she said promoted "bigoted, misogynist, anti-Semitic, and racist claims.” The rest of Clark's liberal colleagues from Massachusetts will attend the inauguration, out of deference to democratic tradition.

Whether or not Sanders will attend Trump's inauguration remains to be seen. But whichever choice he makes, it will send a message, either of the greater importance of fidelity to peaceful transfers of power, or the more pressing need to symbolically protest a president feared by so many Americans.