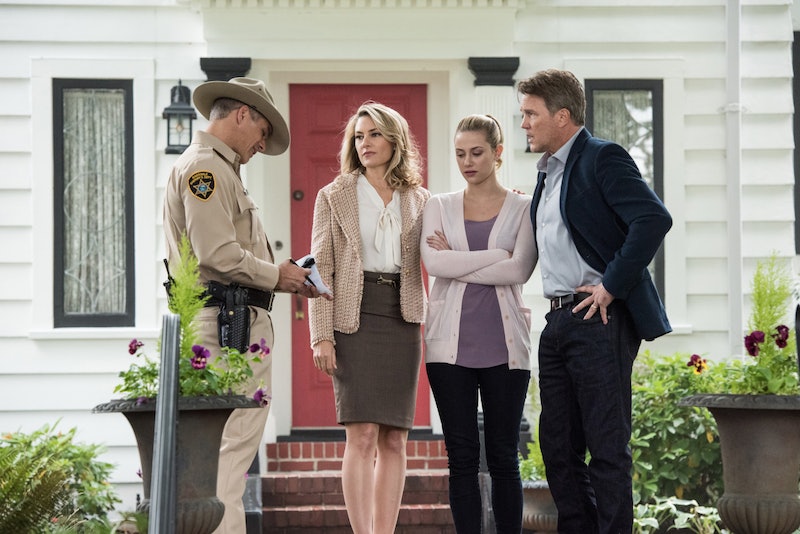 Figuring out who is wearing a black hood and terrorizing Riverdale this season is a mystery that so far has given the audience very few clues as to the killer's identity. Anyone could be the murderer, from a brand new character to one of the people who is already a recognizable member of the Riverdale community. For example, could Betty's dad be the Black Hood? This theory may seem like just another shot in the dark, because it's going to probably be a while before the show reveals who the killer is. But if you think about it, it actually makes a lot of sense that Hal could be the person behind these murders.

While this is an ensemble show with a large cast of regular and recurring characters, many of them can be eliminated because of one simple reason: the physical profile. But Hal Cooper fits it perfectly: he's an older white man, slightly greying, of average height and weight. And he also knows his way around the town of Riverdale. And given that Riverdale Season 2 has spent a lot of time with Betty as she attempts to help heal the town from the emotional damage of the Fred Andrews attack, the aspiring detective might soon realize that the perpetrator is a lot closer than she thinks.

And right now, the case against Hal Cooper is pretty strong. Here's the evidence so far:

He Hasn't Appeared This Season

Hal Cooper hasn't been seen so far this season, while almost every other parent has made an appearance so far. Is that a clue that he might be guilty, or just a coincidence? It's pretty shocking that Hal hasn't been on the show yet in Season 1, as Betty's mother Alice has been in both episodes.

The Coopers Have A Dark Side

While the Coopers might seem like the perfect family, there's some unresolved rage underneath the surface. In Season 1, when Betty sought out revenge against Chuck, she took things way too far when she put on that wig and became "Dark Betty." Maybe Hal has the same problem when he puts on a Black Hood.

The Coopers Have Distinctive Eyes

One of the features that Archie remembers most vividly about his attacker are his dark green eyes. In addition to matching the rest of the physical description of the killer, actor Lochlyn Munro, who plays Hal, has similar blue-green eyes.

The Coopers Could Want Fred's Information

One of the most puzzling aspects of the case is that the thief stole Fred's wallet, but nothing else from the scene. Alice is Riverdale's resident muckraker, and she could be seeking to expose some information that she knows is only accessible if she has Fred's closest-held possessions.

It might seem backwards, but by giving the town a dark avenger, perhaps the Coopers' collective goal is to push back on the Serpents, get rid of predators like Miss Grundy, and flush out drugs at Riverdale High using extreme measures. Alice seems obsessed with how the "nice" part of town is now being affected by the "wrong side of the tracks" kids.

They Don't Want Another Polly

The Coopers' eldest daughter, Polly, fell in love with a kid who got her pregnant, broke her heart, and was a victim of the town's secret drug trade. Her parents shipped her off rather than confronting what happened to her. Now, Betty is dating a kid from the wrong side of the tracks whose father helped cover up Jason Blossom's murder and there's a new drug of choice circulating around town. Hal may have created the Black Hood persona in hopes of keeping his daughter away from these bad influences.

Most of the evidence that Hal Cooper is the Black Hood is circumstantial, and there's not much that ties him to the scene. But the overprotective Cooper parents have always been worried about bad influences in the town. And Betty is a major character, which would make the reveal that Hal is the culprit a huge moment. But if that's the case, then the Coopers don't know their daughter at all — she would do anything to protect her friends, her new relationship, and her memories of Riverdale — even turning in her own parents.