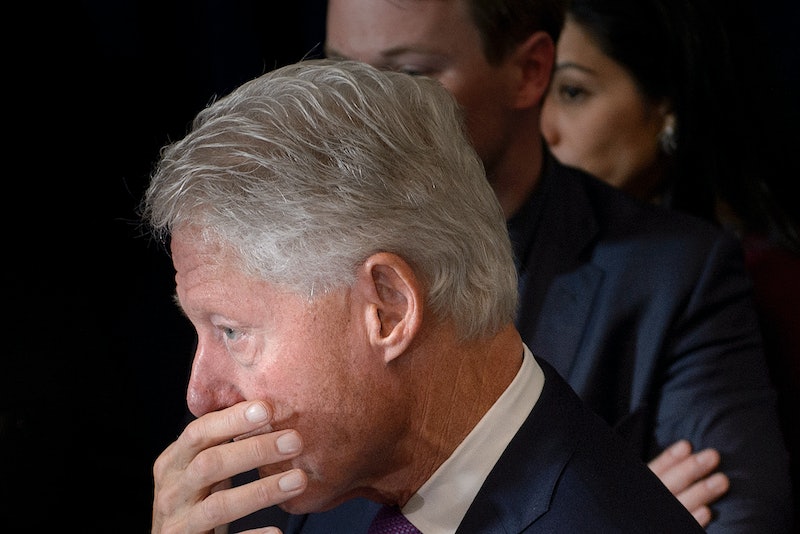 Donald Trump made more than a few enemies during his presidential campaign and insulted a lot of people and institutions — John McCain, Megyn Kelly, the Khan family, the New York Times. However, no one earned more ire than the "nasty woman," herself, his Democratic rival, Hillary Clinton. So, while former presidents often attend inauguration ceremonies, when Trump is sworn into office on Jan. 20, many may be wondering if Bill Clinton is at the inauguration?

Well, Clinton, obviously has a unique dog in this fight because not only has he spoken out against the president-to-be, but also because he is the husband of Trump's challenger. For a while Clinton was staying mum on his attendance status, and it would hardly have been surprising if he decided against making an appearance at the inauguration ceremony (even though he and Trump appeared to have a friendly relationship before this campaign).

Apparently, Clinton has officially turned the other cheek and will be in attendance for Trump's inauguration. To some, it was surprising enough that the 42nd president called to formally congratulate Trump after the election. The warmth could've started and ended there. However, it was reported just over two weeks before the inauguration that Clinton will be at the ceremony making Trump's upcoming presidency official— and it's not just Bill, Hillary will also be there in person to support the transition.

Clinton wasn't the only former president who was wavering on if he wanted to go to the inauguration. For a long while, of the living former presidents — Jimmy Carter, George H.W. Bush, Bill Clinton, George W. Bush— only one confirmed he would attend: Carter. President Obama, who will soon join this list, was expected to attend, as well.

While his father made it clear that he and wife, Barbara, were too old to attend, George W. Bush held off on giving a straight answer about his inauguration RSVP. Although the second Bush president did not vote for Trump, according to CNN, he did offer his support to Trump and his family after the election in a Facebook post that read:

This morning I called President-elect Donald Trump and congratulated him on his election as President of the United States of America. Laura and I wish the President-elect, Melania, and the entire Trump family all our very best as they take on an awesome responsibility and begin an exciting new chapter in their lives. We pray for the success of our country and the success of our new President.

In quite the coincidence, on the same day that the news of Clinton's inauguration attendance broke, George W. and Laura gave a definitive yes.