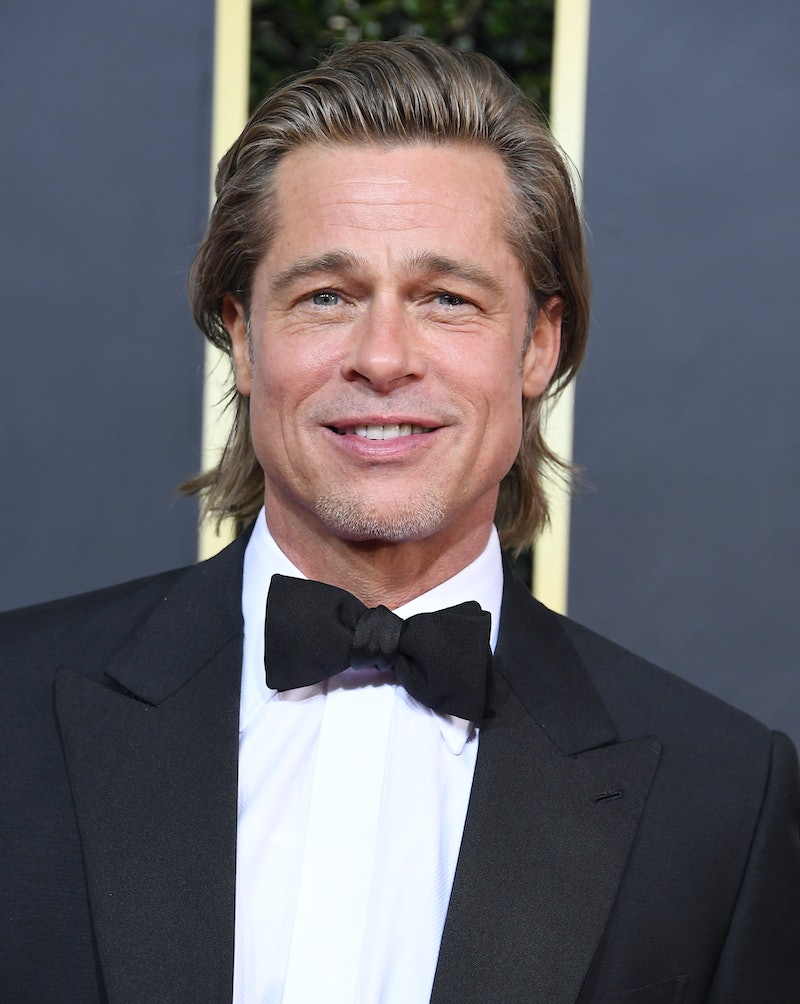 If his awards show speeches are anything to go by, Brad Pitt really wants you to know he's single. First, he joked about his Tinder profile at the SAGs. Then, he said he wanted to bring his mom to the Golden Globes, but "couldn't because any woman I stand next to, they say I'm dating… and it would just be awkward."

As most of the world knows at this point, Pitt was previously married to Angelina Jolie, his partner of over a decade. But she filed for divorce in 2016, and Pitt hasn't dated anyone since then. The tabloids have inevitably linked him to several women over the past few years — including Kate Hudson, Sienna Miller, and Charlize Theron — but in a December 2019 interview with the New York Times, Pitt brushed off all the rumors. "I don't know how many women they've said I've been dating the last two or three years, and none of it's true," he said.

Because of his level of stardom, Pitt has long dealt with rumors circulating about his personal life. The scrutiny seemed especially intense after his split from Jolie, but Pitt had bigger things to worry about at the time. In May 2017, he spoke to GQ about how he and Jolie were in the early stages of figuring out their custody agreement, and that they were just trying to keep things out of court. "We've been able to work together to sort this out. We're both doing our best," he said. "It's just very, very jarring for the kids, to suddenly have their family ripped apart." (They reportedly came to a custody agreement in late 2018.)

Since the breakup, Pitt has been focusing on his career and his family, not his dating life, though he does seem to have an odd fixation with how single he is. He couldn't attend the BAFTAs earlier this month, but when he won, he had Margot Robbie read his acceptance speech, which started off with a Brexit joke: "Hey, Britain, heard you just became single. Welcome to the club. Wishing you the best with the divorce settlement."

If Pitt wins on Sunday at the Oscars, expect his speech to include yet another self-deprecating joke about singledom.

More like this
Sydney Sweeney Is Engaged To Her Low-Key Businessman Beau
By Jack Irvin and Jake Viswanath
Who Is Nick Cannon Dating & How Many Kids Does He Have?
By Jordyn Tilchen and Radhika Menon
Gigi Hadid’s Dad Shared What He Knows About Those Leonardo DiCaprio Rumors
By Brad Witter
We’re Still Not Over Britney Spears & Prince William’s “Cyber” Relationship
By Sam Ramsden and Sophie McEvoy
Get Even More From Bustle — Sign Up For The Newsletter