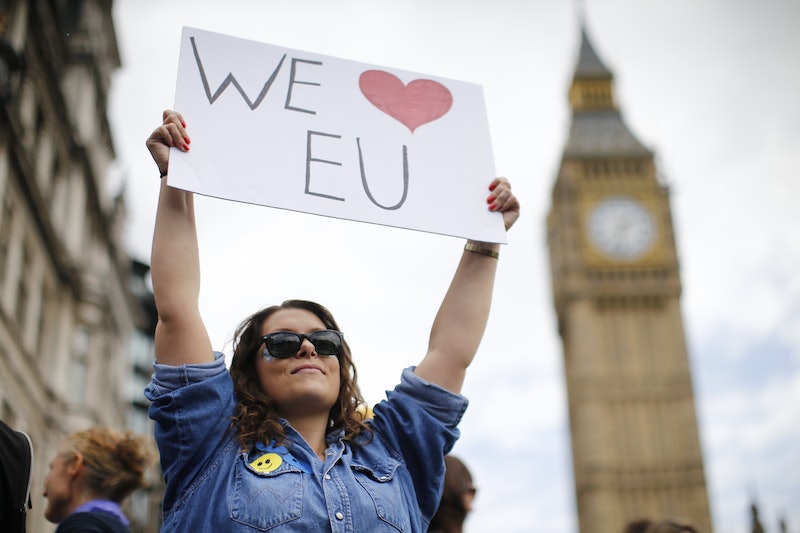 Two years after the Brexit referendum, Britain's departure from the EU continues to dominate the news cycle. While issues including the Irish border and access to the European single market remain at the forefront of debate, one topic remains conspicuously absent: the impact of Brexit on women. According to new campaign group Women for a People's Vote, Brexit could expand the gender pay gap, threaten women's rights in the workplace, and undermine women's healthcare — and yet, the group argues, the Brexit conversation is dominated by men. So is Brexit a feminist issue? And why aren't we talking about this more?

Further findings from the survey? 35 per cent of women believe the NHS will suffer post-Brexit, while 44 per cent think leaving the EU will weaken the economy, and 45 per cent think taxes will go up. Overall, only 13 per cent of women think Britain will secure a good deal with the EU. "If we get a no-deal Brexit, it’ll be us, our daughters, and our grand-daughters cleaning up the mess," political commentator and comedian Ayesha Hazarika said at the September launch of the Women for a People's Vote campaign, according to Harper's Bazaar.

And yet these concerns aren't being heard in the current Brexit process. "The failure to represent women’s voices in the debate is nothing short of a national scandal," activist and journalist Caroline Criado-Perez said at the launch.

Political coverage of Brexit also favours male voices, Women for a People's Vote says. Since the referendum, approximately 59 per cent of guests on Britain's major political TV programmes have been men, while approximately 41 per cent have been female. And according to research by Women in Journalism, only 25 per cent of front page newspaper stories were written by women in June and July 2017. Meanwhile, the only major British newspaper with a female political editor is the Guardian, with Anushka Asthana and Heather Stewart sharing the role.

So how will Brexit impact women? A July 2018 review by the Equality and Human Rights Commission (EHRC) warned that gender equality rights and funding for women's services are under particular threat, as the Guardian reports. In the publication, the commission asks the government to guarantee that "there is no regression in the respect, protection and fulfillment of human rights," noting that employment rights are particularly at risk without EU protections.

The EHRC also urges the government to ensure that the withdrawal of funding from the EU "does not undermine the UK’s equality and human rights infrastructure, including the already scarce funding available to specialist services, such as those that support women survivors of violence and domestic abuse."

The Women's Budget Group (WBG) suggests that if leaving the EU triggers a fall in GDP, the government is likely to cut public spending further. "Reductions in public spending have a disproportionate negative impact on women as the primary users of public services, the majority of workers in the public sector, and the main providers of unpaid work when public services are cut," the WBG says in a March 2018 report.

And BAME women could suffer the most from decreased public spending after Brexit if current austerity trends continue. "Austerity measures have reduced local authority funding at the same time as they have moved away from grant giving to commissioning of services and this has had a profound impact on organisations that support women," the WBG says — and organisations targeted towards BAME women have suffered the most.

What's more, the report also says that since austerity measures established in 2010, "research by WBG and the Runnymede Trust has shown that among the poorest 20 per cent of households, black and Asian households have seen their living standards fall by 11.6 per cent and 11.2 per cent, while the living standards of white households in this group fell by 8.9 per cent."

The EU referendum has already impacted BAME people through an increase in racist abuse: for instance, the BBC reported on a "spike" in hate crimes after the vote. Professor E. Tendayi Achiume, UN special rapporteur on contemporary forms of racism, racial discrimination, xenophobia, and related intolerance, said Britain has seen a rise in "explicit racial, ethnic and religious intolerance" after the Brexit vote, as the Guardian reports.

Brexit's impact on health services will also disproportionately affect women; the Women for a People's Vote campaign says that "women access the NHS more than men through our use of maternity and children’s services and because we live longer." Since the referendum, over 1,000 EU nurses and midwives have left the NHS, and the campaign predicts that a further 4,500 will leave by 2022.

"EU nurses are not only a vital part of our workforce," said Maria Trewern, Chair of Council at the Royal College of Nursing, at the campaign launch. "They, and nursing staff from around the world, are part of our local communities; they add to the cultural richness of the nursing profession and reaffirm its global reach. We must make those colleagues feel valued and want to stay here in the UK after Brexit."

Women might also be forced to quit their jobs and take on more unpaid caring roles if staff from the European Economic Area can no longer work in the UK, according to an August 2018 report from the Department of Health. Up to 28,000 care sector workers could be lost in the five years after the UK's departure from the EU, as the Guardian reports. "If we fail to meet social care needs adequately we are likely to see a decrease in labour market participation levels, especially among women, as greater numbers undertake informal care," the report says.

A few more alarming statistics concerning Brexit and women: almost 900,000 women's jobs could be under threat when Britain leaves the EU, according to the Women for a People's Vote campaign, while the gender pay gap could increase as women in full time jobs lose £1250 a year. In short, Brexit is very much a women's issue — so why aren't our voices being heard?