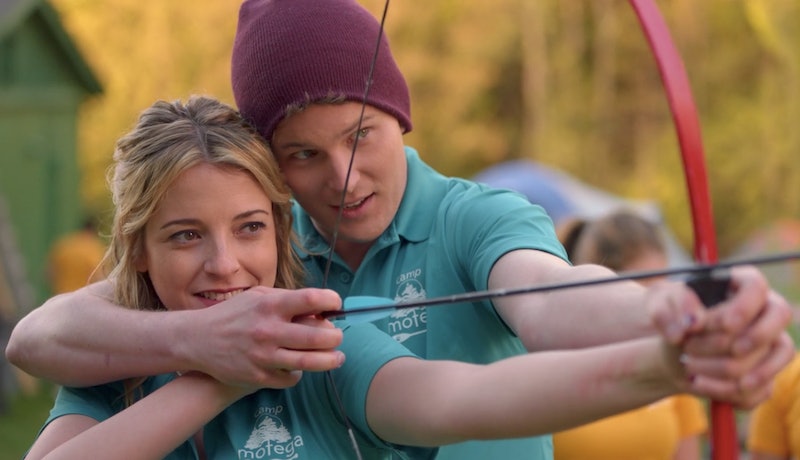 Season 2 of Netflix's anthology horror series Slasher, entitled Guilty Party, takes place at Camp Motega, where some truly terrifying shenanigans go down. The series focuses on former camp counselors hiding a terrible secret about what happened there five years prior. They return to the camp as a group, but it's clear that Camp Motega has undergone some changes. It's now home to a commune with little communication with the outside world, adding an entirely new creep factor. It's a unique situation to be sure, but is the camp from Slasher a real place?

It's not, which is probably for the best — a creepy summer camp-turned-remote commune is definitely not any place I'd want to stumble upon. But this season of the series does continue the trend of spooky summer camps, one that dates all the way back to the 1980 OG slasher classic, Friday The 13th. Camp Crystal Lake was the perfect serene backdrop for the horrifying events that transpired in that movie and its sequels. Many other similarly set films and shows have taken a page out of its book, not only by featuring summer camps, but also the things that make up a camp's atmosphere — lakes, cabins, deep woods and streams.

They're seemingly safe, serene and cozy locations, and the contrast between the location and the terror that ensues is a classic horror movie trope. The 1978 cult classic Piranha shocked viewers with vicious fish trying to eat a summer camp's swimmers. The 1983 horror flick Sleepaway Camp took audiences to a summer camp where lodgers mysteriously started dropping dead. Cabin Fever lives up to its name and features plenty of lounging by a lake in between cringe-worthy scares and a particularly nauseating leg-shaving scene. Even the classic Blair Witch Project has the same feel as summer camp movies. There's also the endless stream of campy (no pun intended) low budget B-horror films that utilize the same setting — it's easy and it's familiar, but also puts audiences automatically on edge. 2012's The Cabin In The Woods used the exact same tropes to its advantage in a somewhat tongue-in-cheek way, while also producing legit scares.

Perhaps part of why these settings are so scary to many of us is because we can directly relate to them. Chances are, you've been to a summer camp, or at least gone camping in a tent or at a lodge. You've walked along a stream or sunbathed by a lake, and for most, those are pleasant memories to look back on. When films and TV shows like this take those pleasant settings and plant a seed of doubt — making you think that maybe you're not so safe here, after all — it stirs something in our brains.

There's a sense of isolation, as someone points out in the very first episode of Slasher: Guilty Party — if something goes wrong, there's not any cell phone service, a nearby police force, or neighbors to come to your aid. And the cast of Slasher certainly felt some of that as they filmed in the dead of a Canadian winter. "We all work very hard and we all went through frigid temperatures like The Revenant," star Lovell Adams-Gray told PureFandom.com.

Whatever the reason we all find horror movies and TV shows set at camp so spooky, Slasher is likely to take full advantage of it, and with a truly unique twist. A horror camp turned commune? That's something horror fans have never seen before, and it's opening up a whole world of possibilities for the show. The new take on a truly iconic horror and slasher setting is sure to make this season an interesting one to watch.