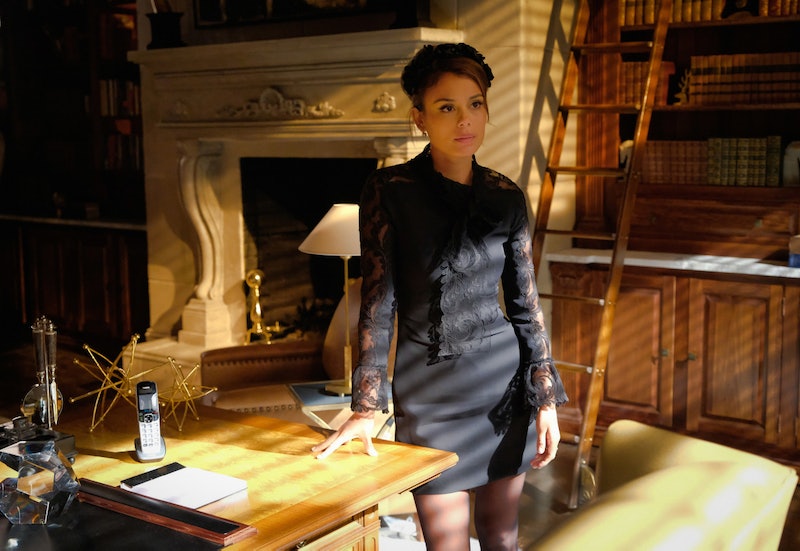 When it came to transforming Dynasty from '80s soap to new age drama, The CW made a few modern updates. The cast is more diverse, the tone is more progressive, and the setting has moved from Denver to Atlanta, where the show's central family runs Carrington Atlantic, a newly rebranded take on the international oil corp that fueled the original series. So, given all those changes, its worth asking if the network looked a little closer to home for inspiration: Is Dynasty's Carrington Atlantic a real company?

A quick internet search reveals that, at least by name, it's not, and if it's based on a real company, those ties aren't immediately apparent, though it has been altered to more authentically mirror real life. In the original Dynasty, the Carrington family business was called Denver-Carrington, an oil empire built by family patriarch Blake Carrington (now played by Devious Maids' Grant Show) from a single well into a lucrative worldwide enterprise.

But, in the three decades since the show was last on-air, oil conglomerates have turned their attention stateside in an attempt to drive down gas prices and decrease America's reliance on other countries for resources. Enter fracking, an extraction method used to access America's untapped natural gas and oil reserves by drilling into shale rock deep beneath the earth's surface. It's a quite technical process, and a contentious one at that.

According to Vox, supporters of fracking argue that it's allowed electric utilities to use more cheap gas and less dirty coal to generate power, and since gas burns more cleanly, that curbs air pollution: U.S. carbon dioxide emissions plunged roughly 10 percent from 2005 to 2015. On the other side of the aisle, detractors contend that not only does fracking cause air and water pollution, but that there's methane — a potent greenhouse gas — leaking out of all those gas wells and pipelines, which could offset the benefits of lower carbon dioxide emissions. There have been proposals to fix those problems, but the debate comes down to whether or not it's better to tighten regulations or ban the process altogether, instead focusing on renewable energy sources like wind and solar.

This lays the groundwork for one of the conflicts driving the reboot. Here, the Carringtons are still in the energy biz, but now the company has begun fracking its way through Native American reservations — yet another facet of the controversial debate. In recent years, gas corps have expanded their hunt for oil-rich reserves to Native American territories, sparking national protests around efforts like the Dakota Access Pipeline to preserve their land from damage and protect the ancient burial grounds that remain there.

Adding this plot point not only helps to reposition Dynasty in a modern context, but also redirects the tension between Blake and his son, Steven, that made the original series problematic. In the original series, Blake was repudiated by Steven, who is gay, and refused to accept his sexuality, earning Dynasty criticism for its homophobic undercurrents. Now, however, Steven is proudly out, and this time no one has a problem with it. So instead, he and his father spar over Carrington Atlantic's carbon footprint. As an environmental activist, Steven disagrees with Carrington Atlantic's fracking policies, but the rest of the family doesn't pay it much mind — an aspect that both separates Steven as his own person and adds necessary dimension to the character.

"It's only 30 years ago, but the way the other characters engaged with him around that, the friction between Steven and Blake around that issue, is just absurd when you look at it through a contemporary lens," James Mackay, who plays Steven, previously told Bustle. "Steven in our version, his sexuality isn't the only thing that defines him."

So, while Carrington Atlantic is not, in fact, a real company, the revamped version does make it feel more real. And in Steven's case, it opens the door to a more authentic story line.

More like this
'Reservation Dogs' Season 3 May Finally Mend Bear & Willie Jack’s Relationship
By Gretchen Smail
Glenda Cleveland Died 2 Decades After Trying To Turn In Neighbor Jeffrey Dahmer
By Brad Witter
'Grey's Anatomy's New Intern Got Advice From Dr. Bailey Herself
By Grace Wehniainen
Caleb McLaughlin Details Racism From 'Stranger Things' Fans
By Radhika Menon
Get Even More From Bustle — Sign Up For The Newsletter