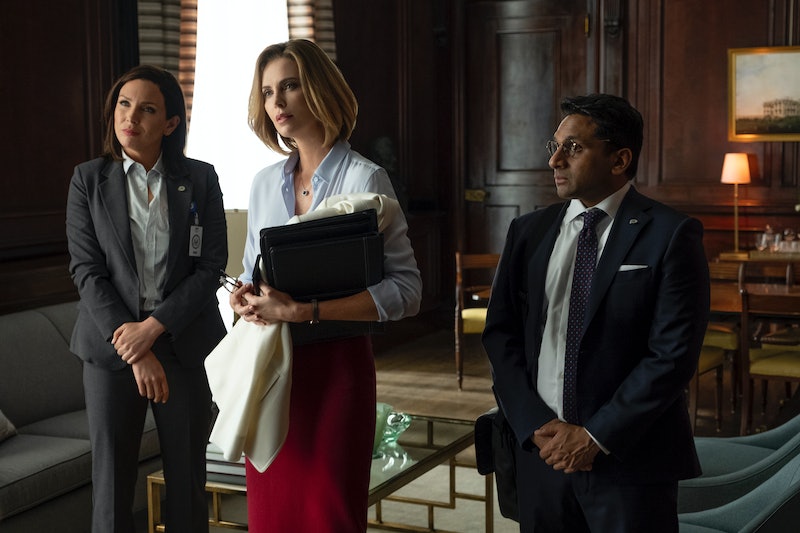 Charlize Theron and Seth Rogen make an unlikely couple in the new rom-com Long Shot, opening May 3 — she's Charlotte Field, an impeccable career politician ready to make the leap from Secretary of State to the presidency; he's Fred Flarsky, a goofball journalist who had a crush on Charlotte back when she was his babysitter. Still, there are details that feel close enough to our present reality that audiences may wonder if Charlotte in Long Shot could be based on a real politician.

It's hard not to make a comparison to a prominent IRL Secretary of State who also ran a tense presidential campaign, though Hillary Clinton never negotiated a hostage situation while high, as Theron's character does. However, when asked by Variety at the film's SXSW premiere if her character was based on any particular person running for office, Theron demurred, following up with, "I guess I was trying to go for something a little bit, just more authentically me?" She added that while the actors didn't meet with any politicians in person, she and Rogen did meet with political speechwriters to "try and get some of that inside stuff right."

In an AP interview, Theron emphatically noted, "This is not a political movie. This is a movie about a relationship," with politics just the workplace backdrop for Charlotte and Fred's budding romance. Still, if you set a rom-com in an office, you're going to get jokes about copiers, coffee breaks, and boss frustrations, and it's no different when choosing a more volatile workplace.

So no, tempting as it might be to compare Charlotte to any of the familiar and/or fresh faces of intelligent, overachieving women in politics, there's no direct connection.

Further distancing Long Shot from any authentic political reference, the script itself was originally written in a completely different political climate: 2011. Talking to CinemaBlend, director Jonathan Levine pointed out, "...Obama was the President, so things changed in America and we had to acknowledge those changes." In this movie, that means casting Bob Odenkirk as a bumbling POTUS.

What Charlotte may remind you of more than any real person is a twist on a romcom staple personality — Vain Pursuits even labelled it their #1 tired romantic comedy character cliché: The Career-Driven Woman. If anything, the character's a reflection of the highly driven and successful woman who plays her. Theron is also the film's co-producer, working with co-producer Rogen for five years to get Long Shot made.

Charlotte's the one who invites Fred into her world, sensing he's the key to a part of herself that she's put aside and wants back. So you could probably say that she's allowed to show more vulnerability — at least to the audience — than women in politics are allowed to show IRL.